Racial issues will likely be front and center again, as Joe Biden will be flanked by Cory Booker and Kamala Harris 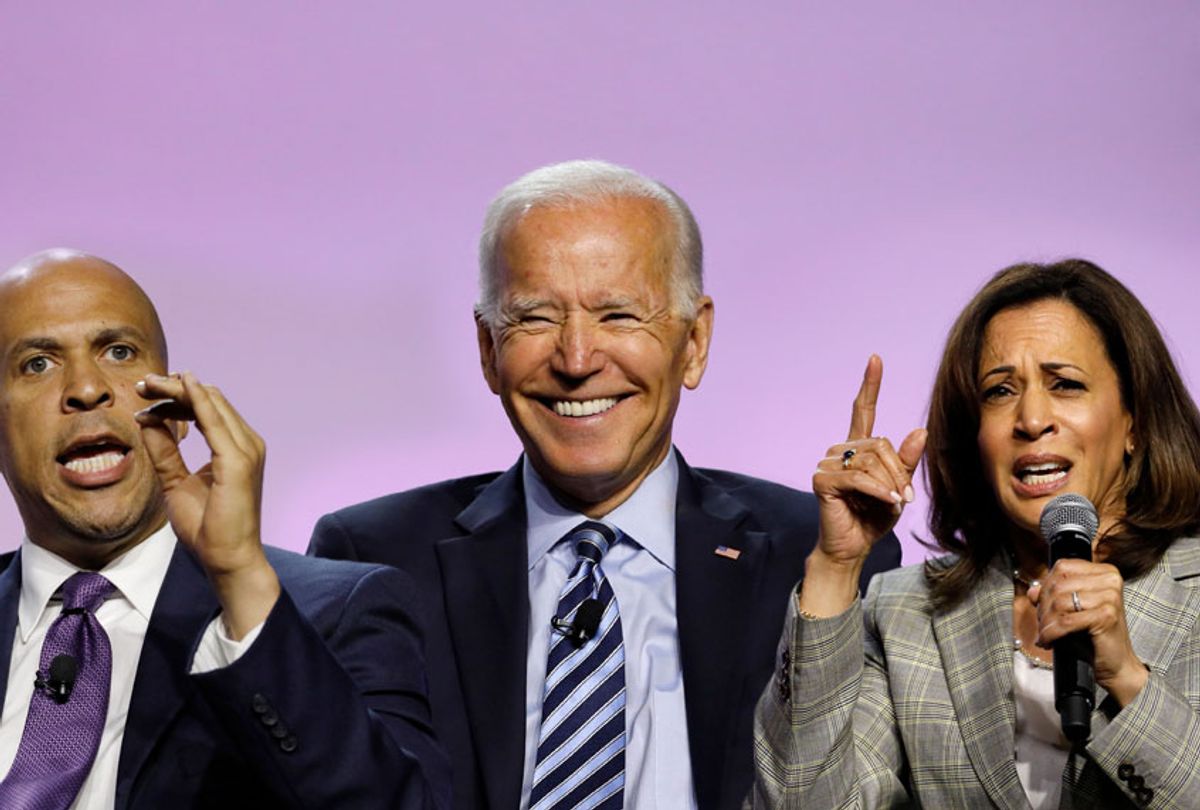 Despite being oriented largely around dry policy concerns, such as health care, the first night of CNN's Democratic debates in Detroit was gangbusters TV. Both Sen. Bernie Sanders of Vermont and Sen. Elizabeth Warren of Massachusetts nimbly batted away attacks from centrist candidates who functioned mainly as stand-ins for former Vice President Joe Biden, the current frontrunner in the Democratic primary race and the only candidate with a timid policy agenda who is polling well.

But while Biden was mostly there in spirit, with his views being poorly represented by also-ran former Rep. John Delaney of Maryland, he will be available in face and body during Wednesday night's debate.  There's good reason to imagine the debate will be as dramatic as the one from the night before, even if Warren and Sanders, Biden's fiercest critics, won't be there.

That's because Biden will stand on stage flanked by Sen. Kamala Harris of California and Sen. Cory Booker of New Jersey, the two African-American candidates in the 2020 field. Both Booker and Harris have spent recent weeks of this campaign leveling pointed criticisms at Biden over his '70s-era relationships with old-school Southern Dixiecrats, his opposition to school desegregation efforts from that era, and his support for harsh criminal justice policies that have disproportionately affected people of color.

Biden's face-plant performance during the June debate in Miami was the direct result of his support for regressive policies and some of his more tone-deaf rhetoric on racial issues. Moreover, Harris got a spike in coverage, fundraising and polling by going after Biden directly during the last debate. Booker, who has fallen well behind in these metrics — and may be in danger of dropping out of contention altogether — will be tempted to try for a similar moment in the debate. He has, in fact, been signaling as much during the run-up.

So as exciting as Tuesday night's debate was, there's good reason to believe Wednesday may get even hotter, as racial issues tend to stir up the passions among audiences and candidates even more than mainstay issues like health care do.

As touchy as the subject can be, Democratic voters should welcome an open discussion about race in the primary debate. As has been repeated ad nauseam, the main thing primary voters are looking for is a candidate who can take the fight to Donald Trump. And there can be no doubt that Trump intends to make this election all about race. It's critical that Democrats nominate a candidate who can speak about racial issues frankly and without sputtering or getting defensive, because there is absolutely no way Trump will hold back from exploiting this volatile issue.

So even though Warren and Sanders used the first night in Detroit to put on great performances and show off their ability to take the fight to Trump, Harris may well stand out on the second night in the same way she did last month. She may be more moderate than Sanders or Warren on economic issues, but her confidence and poise, especially around questions of racial justice, is incredibly compelling to liberal voters.

It's hard to imagine Trump getting the upper hand over Harris during a general election. On the contrary, it's easy to imagine Trump succumbing repeatedly to his urge to lob racist insults at Harris throughout the campaign, as he has done with nearly every politician of color who has ever challenged him (including her, in fact). While Fox News is ready to reassure the president that he's smart to do that, the reality is that Trump does better in the polls when he tamps down the George Wallace act at least a little.

During the June debate in Miami, Biden mostly tried to keep his head down and avoid provoking conflicts that could damage his frontrunner status. But with the promise of numerous debates ahead — and a winnowed-down field where he will become everyone's favorite target — he may seek to experiment with more aggressive tactics Wednesday night. His campaign has already started to move in that direction, after all.

If so, it could work. Biden's best debates in the past have been the ones where he throws punches, such as when he laid waste to Paul Ryan during a vice presidential debate in 2012.

But this is also a risky move for Biden. He melted down early during his previous presidential campaigns, in 1988 and 2008, because he's ultimately not a very exciting or charismatic candidate. He spent most of his career being re-elected in noncompetitive Senate races in one of the smallest states in the nation. Once on the national stage as vice president, Biden simply played the role of likable white sidekick to Barack Obama. I'm sure Biden and his family members would beg to differ, but the starring role is just not what he was made for.

Perhaps we should note that there will be other candidates on stage besides Biden, Harris and Booker. Those will include Sen. Kirsten Gillibrand of New York, Gov. Jay Inslee of Washington, former HUD secretary Julián Castro (who had a mini-moment last time around), Sen. Michael Bennet of Colorado, New York Mayor Bill de Blasio and cheerful tech-bro Andrew Yang. Barring a miracle, however, those people are basically wasting their time and ours; the epitaphs for their 2020 runs have largely been written.

But even amid all the clutter, expect a high-energy debate with a very different focus than Tuesday night's. But it's likely to be just as compelling, if not more so. The party gets started at 8 p.m. Eastern on CNN.