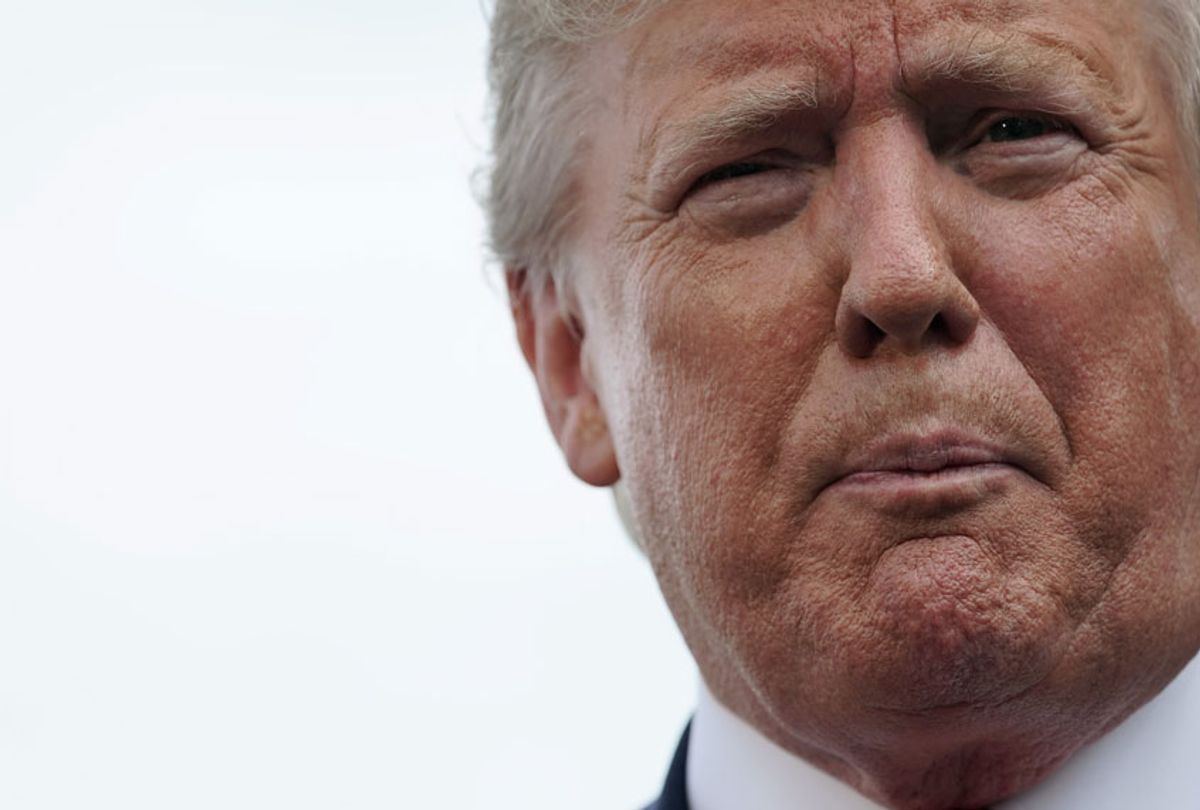 Back in the good old days of, say, 2016, the line about the Republican method for turning out the right-wing vote was that they focused on the "Three G's": God, guns and gays. For decades, demagoguing about the evils of gay rights and the glories of guns, as well as showy acts of piety, have been the bread and butter of Republican politics, the go-to method of whipping up an evangelical base and pushing faltering GOP candidates over the finish line.

But as this past weekend's events show, Donald Trump's strategy for winning the 2020 election would be better understood as the Three Rs: Racism, Russia and Republican servility. By relying on these, Trump hopes he can do exactly what he did in 2016: Run up margins just high enough in Midwestern swing states to win the Electoral College, even though he's likely to lose in the popular vote. Unfortunately, he may not be wrong to believe it will work.

Earlier this month, Trump went on an overtly racist rampage against four congresswomen of color. Most of the media believed that backfired politically on the president. But Trump, egged on by Fox News, seems to have concluded the opposite: He thinks white nationalism is working for him and that he needs to double down.

Over the weekend, Trump, prompted yet again by Fox News, unleashed a racist rant against Rep. Elijah Cummings, D-Md., by claiming that Baltimore, much of which is in Cummings' district, is "a disgusting, rat and rodent infested mess" and that "no human being would want to live there," rhetoric clearly intended to dehumanize the residents of that majority-black city.

The barrage continued into Monday morning, as Trump tweeted that the Rev. Al Sharpton, who went to Baltimore to defend the city's honor, "hates whites," making clearer than ever before that there's a white nationalist agenda behind the racist rhetoric.

As Heather Digby Parton has argued at Salon, this isn't just an eruption of racist rage from Fox News Grandpa. Trump's team is leaning into this as a deliberate electoral strategy, to "make this the most divisive election they possibly can," in hopes of inspiring the base and demoralizing the opposition.

On its own, as Parton lays out, that probably won't work. But that's where the Russians come in. As former special counsel Robert Mueller once again made clear for the American public last week, Trump relied heavily in 2016 on the Russian criminal conspiracy to interfere with the election. It's clear that both he and the Russians fully intend to do the same thing in 2020 — conceivably on an even larger scale.

Trump took a major step over the weekend to assist the Russian election interference in 2020 by getting rid of Dan Coats as head of national intelligence. When Trump has lied and denied the Russian conspiracy in the past, Coats has spoken out, affirming that the Russian government's assaults on the U.S. election were quite real. The fear is obviously that Coats might take measures to prevent Russian interference in the future; getting rid of him must be understood as a form of continuing collusion with the Russian conspiracy.

Considering how intent Trump is on pushing the  "no collusion" lie, it's a little surprising that he would so openly collude with Russia's future efforts to interfere with the American election. But the likely reason is that Russian interference, despite Republican efforts to deny it, actually worked to help push Trump over the finish line in a few key districts  in swing states in 2016.

The Russian conspiracy primarily worked by using WikiLeaks document dumps to sow anti-Clinton conspiracy theories among potential Democratic voters, driving down her overall vote total. But as questioning by Rep. Zoe Lofgren, D-Calif., during the Mueller hearing illustrated, it's probably no coincidence that Trump's campaign chief, Paul Manafort, shared internal polling with a likely Russian spy: After that happened, Russian spooks blitzed Facebook with micro-targeted ads. That could be a coincidence, but as Lofgren noted, it's more likely the Russians simply worked off voter information they "had been given by ... Mr. Manafort."

Trump doesn't have Manafort anymore. But he does have something better: A loyalist at the head of his intelligence services, ready and eager to squash any effort to keep Russia from committing crimes to manipulate the 2020 election.

Ratcliffe's involvement illustrates perhaps the most important piece of Trump's re-election strategy, which is that he's been aided every step of the way by Republican politicians, the vast majority of whom are Trump supplicants eager to betray this country in order to shore up their own power.

Republican politicians have enabled Trump's blatant racism by running interference for him, using the power of their positions to imply that there's room for legitimate debate over whether Trump is actually a racist. Senate Majority Leader Mitch McConnell. R-Ky., for instance, recently said that Trump "is not a racist" and made the nonsensical claim that Trump is telling people of color to leave the country as a strike against "socialism."

Sen. Marco Rubio, R-Fla., in his desperation to defend Trump's racism, tweeted out a fake video purporting to show that Rep. Ilhan Omar, D-Minn., a frequent target of Trump's racist bile, hates white people. The accusation was false, but Rubio is such a lickspittle he dug in and defended himself anyway.

Republicans are running similar interference when it comes to Trump's overt public collusion with Russia. During the Mueller hearings last week, Republicans on both the House Judiciary and Intelligence committees ignored or rejected Mueller's key findings, which include the fact that the Russian government ordered multiple criminal acts in an effort to interfere with the American election, ample evidence that Trump was aware of this criminal conspiracy and welcomed it, and detailed accounts of how Trump went to great lengths to cover up this conspiracy after the election.

Instead, Republicans have spun a bunch of wild conspiracy theories of their own, even trying to imply that Clinton was the real Russian colluder. None of it really makes any sense, but it isn't meant to. It's just a firehose of noise and distortion, meant to confuse both people watching and reporters covering the proceedings. The ultimate purpose is to create space for Trump to collude with Russia in plain sight, shielded from accountability by a blanket of Republicans who constantly claim that Americans must not believe their own lying eyes.

To be sure, the Three G's aren't entirely gone from Republican politics. The evangelical vote needs whipping up and Trump is providing plenty of that when it comes to attacking LGBTQ rights, protecting the gun lobby and undermining women's rights, which is all "God" was ever really a euphemism for. Vice President Mike Pence is still heavily promoting those lines of attack, and Trump can periodically be counted on to offer insincere claims of piety and half-baked defenses of "Second Amendment rights" to help those efforts along.

But when it comes to 2020, it's clear that the meat of Trump's campaign will be racism, the Russians and his Republican lackeys. It's not at all clear that this will fail. All Trump needs is to whip up racist hysteria in certain parts of the country while dividing and demoralizing the Democratic vote. He's got Russian propagandists and Republican apologists helping him every step of the way.