Their brawl emphasized a major question in the health care debate: What is the government's role in providing care? 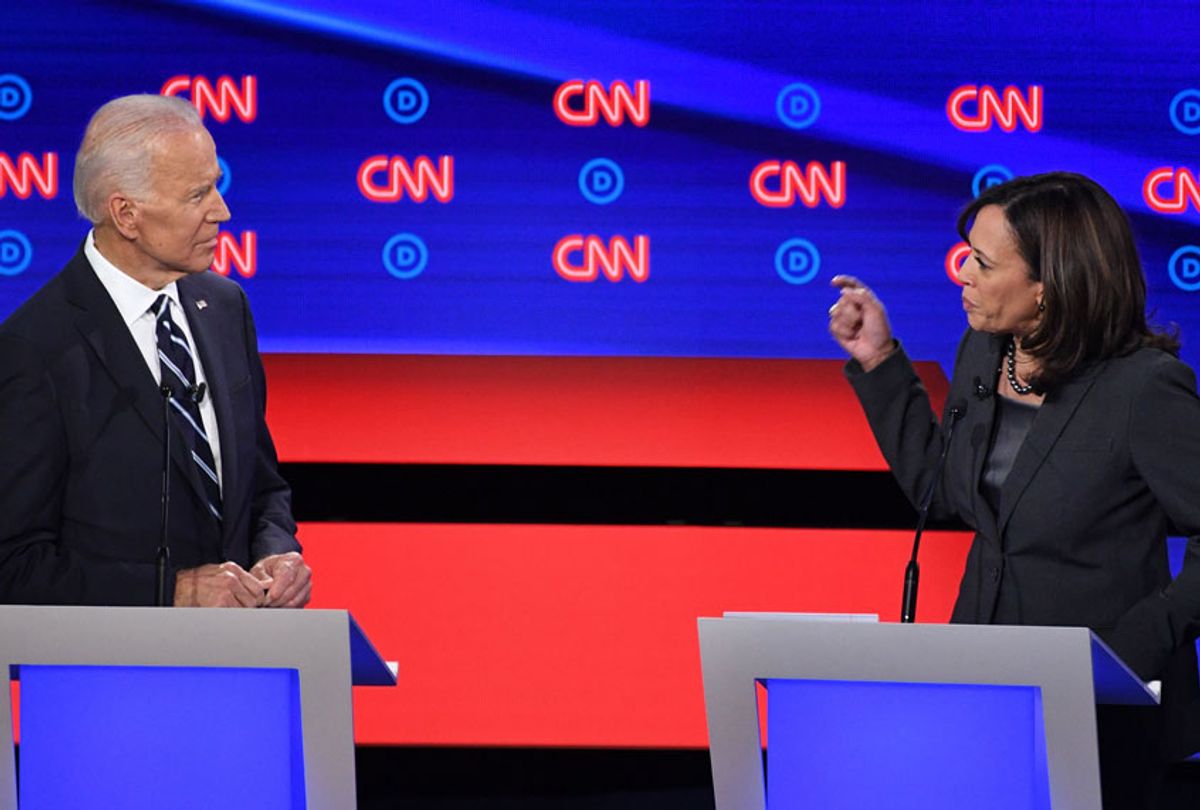 There were many more specifics for each candidate to battle over, since both Biden and Harris have released detailed yet contrasting health care proposals since their last match-up in June. Biden wants to expand on former President Barack Obama's signature legislation, the Affordable Care Act (ACA), by implementing a new government-sponsored insurance option, while Harris wants to overhaul the health care system by gradually transitioning every American into a public or privately-run Medicare for All plan.

As the two candidates shook hands on stage, social media picked up on a now controversial plea uttered by Biden as he greeted Harris: "Go easy on me, kid."

Whether it was a warning or one of Biden's infamous gaffes, it was a clear signal that he would not be blindsided again the way he was in the first debate, when Harris attacked his record opposing busing to desegregate schools decades ago. In that exchange, Biden appeared unprepared and shaky, leading some voters to question whether he was the best-positioned candidate to take on Trump in 2020.

But Wednesday night was different. In his opening statement, Biden noted that Democrats were "expecting some engagement here, and I expect we'll get it," before shifting his attention to Trump.

"Mr. President, this is America," Biden said, alluding to the diversity of the Democratic primary field on stage. "We are stronger and great because of this diversity, Mr. President —  not in spite of it, Mr. President. So Mr. President, let's get something straight: We love it. We are not leaving it. We are here to stay, and we're certainly not going to leave it to you."

Harris, in her opening statement, made clear that she too was ready to take on Trump.

"I come from fighters," she said. "My sister Maya and I joke we grew up surrounded by a bunch of adults that marched about this thing called 'justice.' And I'm prepared to march with you — to fight with you for the best of who we are — and to successfully prosecute the case of four more years of Donald Trump — and against him."

Standing next to each other on the debate stage, the two leading primary contenders sparred over health care in the opening minutes of the debate as Harris was asked to defend her plan, released earlier this week, to transition the country to a Medicare for All system over the course of 10 years.

Harris claimed that Biden's plan would leave millions of Americans still without health insurance. Biden called Harris' proposal "a bunch of malarkey" and took aim at senator's seemingly flip-flopping record on the issue.

"The senator has had several plans so far, and any time someone tells you you're going to get something good in 10 years, you should wonder why it takes 10 years," Biden argued, adding that Harris' plan would cost $3 trillion and cause people to lose their private employer-based insurance. "To be very blunt and to be very straightforward, you can't beat President Trump with double-talk on this plan."

"The reality is that our plan will bring health care to all Americans . . . Your plan, by contrast, leaves out almost 10 million Americans," Harris said, pointing directly at the former vice president. "So, I think that you should really think about what you're saying but be reflective and understand that the people of America want access to health care and do not want cost to their barrier to getting it."

Biden pointed to that $3 trillion figure again, criticized Harris' 10-year timetable and argued that her plan would increase middle-class taxes and eliminate private employer-based insurance — claims that are somewhat misleading.

Although Harris' plan would take 10 years to fully implement, which longer than even a two-term president would serve, she has vowed not to raise taxes on families making less than $100,000 — at least for the first 10 years while the plan is being implemented. However, she has not detailed how she would finance the plan after that. And Biden's claim that Harris' plan would eliminate employer-sponsored insurance is true.

Harris responded to Biden's attacks by arguing that "the cost of doing nothing is far too expensive" and pointed out that health care costs are projected, under the current system, to skyrocket an average of $6 trillion per year across the next decade.

Throughout the debate, Biden maintained his general strategy of invoking Obama as a rebuttal to criticism and touted his health care plan as the best way to build on the most popular tenets of the ACA — from Medicaid expansion to protections for patients with pre-existing conditions.

"Obamacare is working. The way to build this and get to it immediately is to build on Obamacare. Go back and do — take back all the things that Trump took away, provide a public option, meaning every single person in America would be able to buy into that option if they didn't like their employer plan, or if they're on Medicaid, they'd automatically be in the plan," he said.

Biden then pointed out that his plan would cost far less than Medicare for All and would "take place immediately."

"It would move quickly, and it would insure the vast, vast, vast majority of Americans," he said. "In the meantime, what happens? Did anybody tell you how much their plans cost? My plan costs $750 billion. That's what it costs. Not $30 trillion."

Harris, knocking Biden's frequent references to Obama, highlighted that former Obama Health and Human Services Secretary Kathleen Sebelius had endorsed her plan. She then continued to rail against private insurance under the current system, co-pays and deductibles for private plans (including those sold under the ACA), which have topped $5,000.

"My plan makes a limit of co-pay to be $1,000," Biden replied. (Biden probably meant deductibles here. Later in the debate, he clarified that deductibles would be capped at $1,000.)

He then reiterated that Democrats should not abolish employer-sponsored insurance if people want to keep it.

"If the 160 million who have it say they like their employer insurance, they should have a right to have it," Biden added.

After hearing from Sen. Cory Booker of New Jersey, who criticized the fighting among Democrats when Republicans are "working right now to take away Americans' health care," and Rep. Tulsi Gabbard of Hawaii who slammed Harris for getting Sebelius's support, Harris targeted Biden again, because his plan "does not cover everyone in America."

"I'm going back to Vice President Biden, because your plan does not cover everyone in America. By your staff's and your own definition, 10 million people — as many as 10 million people — will not have access to health care," she said. "And in 2019 in America, for a Democrat to be running for president with a plan that does not cover everyone, I think is without excuse."

Biden retorted that his plan "will cover everyone," despite the figures cited in his own policy proposal. Although his plan seeks to expand coverage to low-income Americans in Republican-led states who have refused to expand Medicaid under the ACA, it is still an optional program that does not include the broad automatic enrollment which Medicare for All would use to cover every single person. Biden's own website says 97 percent of Americans  — not 100 percent — would be covered through his plan, leaving about 10 million Americans uninsured.

The health care feud set two of the leading Democratic candidates against each other from the beginning of the debate, with Biden and Harris accusing one another of mischaracterizing their health care proposals.

Both Harris and Biden have stopped short of the Medicare for All plan endorsed by presidential hopefuls Sen. Bernie Sanders, I-Vt., and Sen. Elizabeth Warren, D-Mass., which would abolish private insurance in favor of a single government-sponsored system with no premiums, deductibles or co-pays. That plan, occasionally referred to as a single-payer system, is far more comprehensive and would require larger tax increases on the middle-class.

But experts have also stated that a Medicare for All system would be much simpler than the plans proposed by Biden and Harris, since it would move the country from a fragmented network of public and private financing — in which patients receive care from multiple providers related to patient preferences, physician referrals and provider-specific factors — to a single government-run plan.

The candidates also struggled to explain the nuances of their plans, limited by time on a crowded debate stage that features eight other contenders.

After Sen. Michael Bennet of Colorado, one of the more moderate Democrats in the primary, argued that Harris' plan would abolish employer-based insurance, she appeared to struggle to address the impact her plan would have on the more than 150 million Americans who currently get insurance through their employers.

"We cannot keep the Republican talking points. You got to stop," Harris said, offering the same retort that Sanders used the night before to bemoan moderates and other Democrats using conservative rhetoric to attack Medicare for All.

She then acknowledged that, yes, her plan would abolish employed-based insurance.

"The reality is that under my Medicare for All plan, yes, employers are not going to be able to dictate the kind of health care that their employees get. They will be able to make that decision," she said. "Private insurance companies and private carriers — if they comply by our rules and play by our rules — will be able to offer those employees health care coverage under a private Medicare plan, or they can have the option of a public Medicare plan."

"But it is misleading to suggest that employees want what their employer is offering only," she continued. "They want choice and my plan gives that to them."

Although Harris and Biden sparred over several specific components of their health care plans, their main argument centered on the same issue and lasted from the debate's beginning to end: Harris wants to completely reshape how health care is delivered across the country, while Biden wants to build on the system that's already in place to cover many more, but not all, Americans.

In this way, Harris and Biden pointed to perhaps the most important question currently unfolding in the health care debate: Is providing affordable, universal coverage the goal of the American health system? For now, 2020 Democrats appear unable to reach a consensus on that front.