Kelly Craft, new U.S. ambassador to the UN, has no diplomatic or policy experience. But she loves Trump's hotels 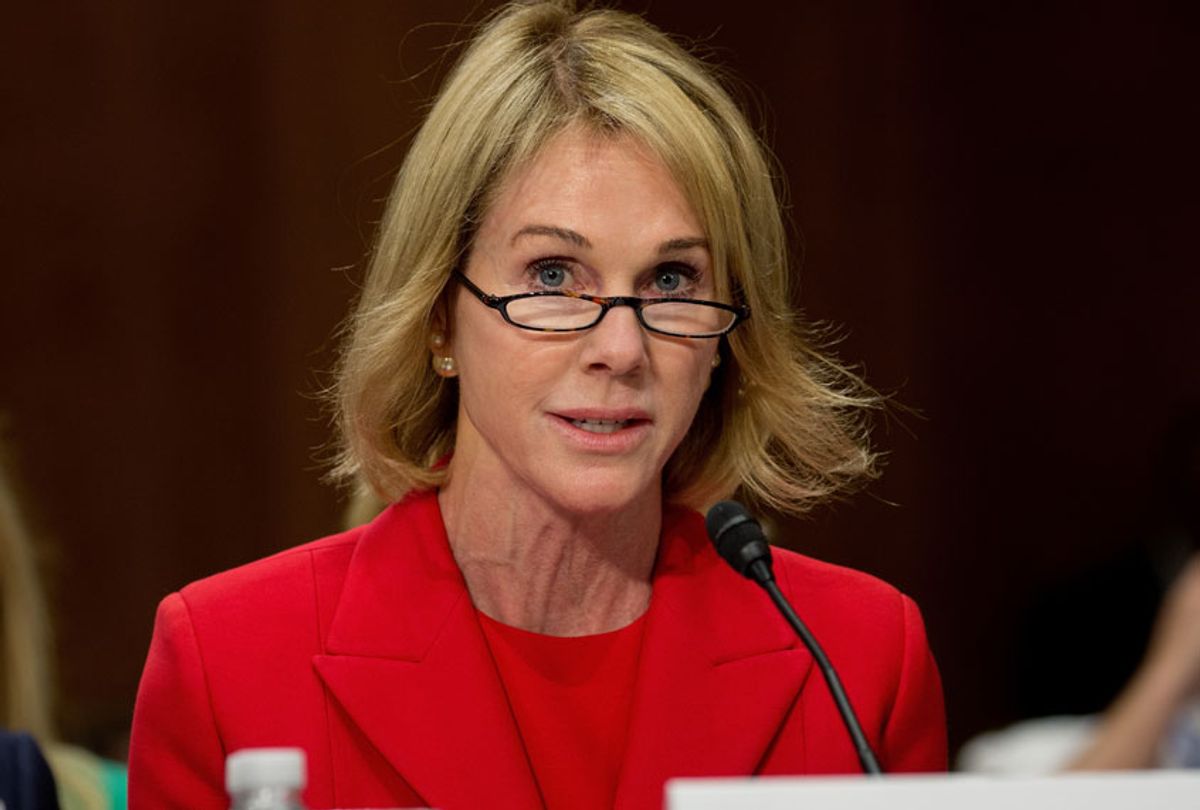 The Senate voted on Wednesday to confirm President Trump’s former ambassador to Canada, Kelly Knight Craft, as the new U.S. ambassador to the United Nations despite Democratic calls to reject her nomination.

Craft, the wife of coal magnate and Republican donor Joe Craft, was confirmed in a 56-34 vote.

The confirmation came after Sen. Bob Menendez of New Jersey, the top Democrat on the Senate Foreign Relations Committee, issued a report citing numerous conflicts that Democrats say should have disqualified her from consideration.

The report noted that Craft had spent 58 percent of her time as ambassador outside Canada and had traveled without State Department approval. Craft also stayed at the Trump International Hotel in Washington for at least 29 nights, the report said.

The Washington Post reported in February that the Crafts, who gave about $1.5 million to Republican candidates in 2016, had been “repeat, high-paying” visitors to the hotel and were listed as “gold-level members” of the Trump Card rewards program.

The couple was listed as “high-rate” customers who stayed at least 20 nights in Trump hotels according documents obtained by the Post, which noted that was an “unusually high number” among hundreds of other VIP guests reviewed by reporters.

Gold-level membership appears to be quite rare. The Post’s David Farenthold wrote on Twitter that the paper had reviewed data from 1,200 stays at Trump’s Washington hotel and only found 10 people who were listed as gold members.

Along with the Crafts, the gold members included Trump’s personal attorney Rudy Giuliani, U.S. ambassador to Germany Richard Grenell, and a private prison executive at the Geo Group.

Even as Trump’s other properties like Trump Tower, Mar-a-Lago and the Trump Doral golf resort have struggled, his Washington hotel has continued to bring in high revenues.

Those revenues have been buoyed by the Republican Party and the Trump campaign’s frequent use of the hotel, as well as by the numerous foreign officials and corporate executives who have stayed there while apparently seeking to curry favor with the administration.

Along with Craft's frequent stays at the Trump hotel and her frequent absences from her diplomatic post in Ottawa, Menendez’s report noted that Craft’s only professional experience before the ambassadorship was in a small marketing firm she founded and that she “displayed a lack of depth on basic foreign policy issues” during her confirmation hearing before the Senate.

“Craft’s lack of diplomatic or substantive policy experience, combined with lackluster responses at her nomination hearing show that she does not possess the credentials to forcefully represent and defend U.S. national interests and values against the Russians, Chinese, and others who seek to undermine democracy and human rights around the world,” the report said.

Craft also came under criticism shortly after becoming the Canadian ambassador when she told CBC News that she believes “both sides” of the climate change debate.

“I believe there are sciences on both sides that are accurate,” Craft told outlet. “Both sides have their own results from their studies, and I appreciate and respect both sides of the science.”