"The nation is turning to Leader McConnell right now for leadership, and this is the furthest thing from it" 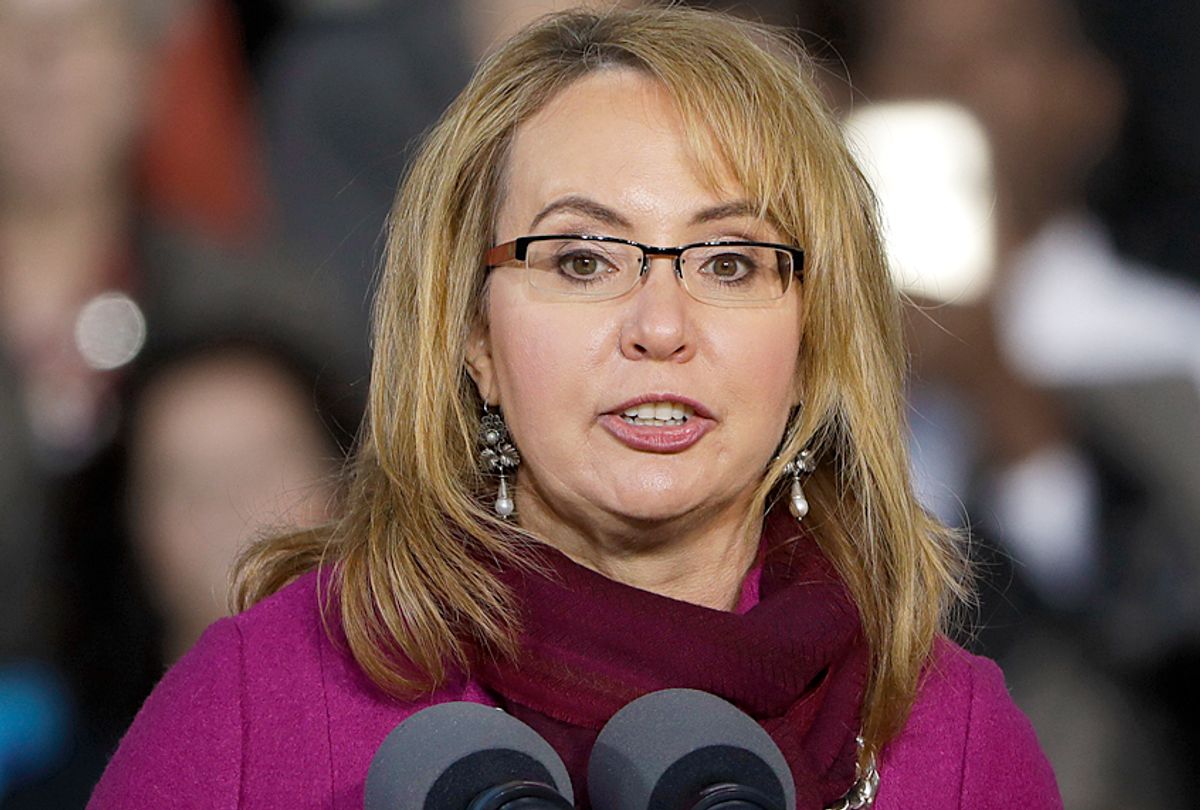 Gabby Giffords, the former Arizona congresswoman who survived a 2011 mass shooting, has demanded that Senate Majority Leader Mitch McConnell, R-Ky., to apologize for joking about the deaths of his political opponents in the immediate aftermath of Saturday's massacre in El Paso, Texas, which claimed the lives of 22 Americans.

"The nation is turning to Leader McConnell right now for leadership, and this is the furthest thing from it," Giffords tweeted on Monday. "Leader McConnell must apologize."

Amid his appearance at the Fancy Farm picnic Saturday in western Kentucky, McConnell, who has referred to himself the "Grim Reaper," shared on Twitter a photo of a display of fake grave markers erected outside the annual event. Nestled between "Team Mitch" yard signs were tombstones attributed to Democrats: "Green New Deal" and "socialism."

But also listed were the names of living political figures: U.S. Circuit Court Judge Merrick Garland, whose nomination to the Supreme Court by former President Barack Obama was famously blocked from consideration by McConnell; Alison Lundergan Grimes, who unsuccessfully ran against McConnell as Kentucky's Democratic nominee for Senate in 2014; and Amy McGrath, who is competing in the party's primary for the 2020 nomination.

"Hours after the El Paso shooting, Mitch McConnell proudly tweeted this photo," McGrath responded on Twitter. "I find it so troubling that our politics have become so nasty and personal that the Senate Majority Leader thinks it's appropriate to use imagery of the death of a political opponent (me) as messaging."

"It's symptomatic of what is wrong with our system," she continued on Monday. "I'm fine with the ordinary rough and tumble of politics, but this strikes me as beyond the pale."

Grimes, who is currently Kentucky's secretary of state, replied by saying that courageous leaders were needed — not cowards.

"I’m saddened to learn that @senatemajldr got a good laugh this weekend out of the 'death' of Merrick Garland, @AmyMcGrathKY & myself,"  she tweeted on Monday. "Our nation has endured 250 mass shootings this year. As political rhetoric is escalating we need courageous leaders not cowards."

In the aftermath of the El Paso mass shooting, McConnell sent prayers to the victims and their loved ones. Rep. Alexandria Ocasio-Cortez, D-N.Y., retweeted his message as she called out the majority leader for his inaction on gun control.

"The House passed HR8, a Bipartisan Background Checks Act, *5 months ago* and the Senate has yet to vote on it. It was one of our 1st major priorities after ending the gov shutdown. You’ve been sitting on it since February giving bogus excuses," Ocasio-Cortez wrote Sunday on Twitter. "Care to explain the people why?"

More than 120,000 tweets sharing the hashtag #MassacreMitch were sent in the wake of this weekend's pair of mass shootings, calling out the Republican leader over Senate inaction on gun control in the wake of continued bloodshed. It directly echoed recent criticisms of McConnell as "Moscow Mitch" after his repeated refusal to consider election security legislation amid the continued fallout of Russian interference in the 2016 race.

On Sunday, McConnell endured a fractured shoulder when he fell outside of his home in the city of Louisville. The news arrived on the same day that Democratic leaders in Congress called on the top Republican to reconvene the Senate, which is currently on summer recess, to pass legislation to reform gun laws.

Among them was Senate Minority Leader Chuck Schumer, D-N.Y., who said his counterpart "must call the Senate back for an emergency session." The top Senate Democrat demanded that the upper chamber "debate and vote" on the universal background check legislation passed by the House in February.

Giffords, who survived an attack on Jan. 8, 2011, when Jared Lee Loughner opened fire on a meeting with constituents, killing six people, told McConnell that his "words and actions matter."

"McConnell tweeted Saturday that he was 'horrified' by the 'senseless violence,'" she tweeted. "I am appalled that in this divisive political climate—a climate where gun violence fueled by hate is on the rise—Mitch McConnell is joking about the death of his current and former opponents and a federal judge."

"Threats, intimidation, and hate have no place in our society," Giffords added. "Every person in America, especially someone in a position of leadership, has a responsibility to recognize that words and actions matter. What we say and what we do inspires others to act."