Will Ivanka Trump replace Mike Pence on the 2020 Republican ticket?

"Ivanka . . . polls better than her father in the critical states of the industrial Midwest" 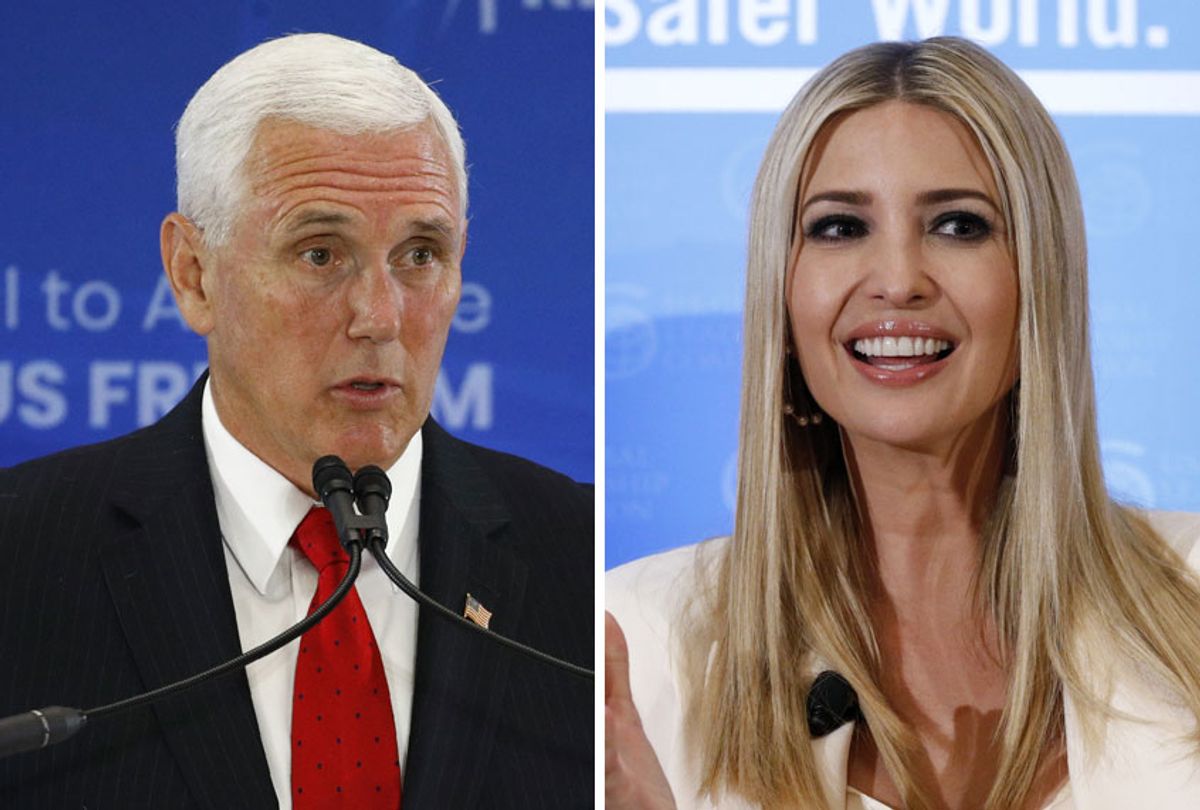 It remains to be seen whether or not President Donald Trump will win a second term in 2020. But whether he remains in the White House until January 2021 or January 2025, a new report by Vanessa Grigoriadis for New York Magazine found that the political ambitions of his 37-year-old daughter, Ivanka Trump, go beyond the current administration.

According to Grigoriadis’ article, the president’s daughter envisions a future that is “post–White House, post–New York, even post-America” and that of “a princess diplomat astride the globe.”

But it probably doesn’t involve a return to her home town, New York City.

Members of the Trump administration, Grigoriadis notes, have come and gone. Yet Ivanka Trump and her husband, fellow White House adviser Jared Kushner, have remained — and she has stayed longer than other Trump allies who didn’t want the pair around.

“Over time, almost everybody in the White House but Jared and Ivanka has disappeared — Steve Bannon, Reince Priebus, Gary Cohn, even four-star Marine Gen. John Kelly, who was expressly meant to rein in the power of Ivanka and others but ultimately became the victim of their machination,” Grigoriadis explains.

Ivanka Trump, according to Grigoriadis, views herself as sort of a political equivalent of Donatella Versace — and she has been making inroads on the right.

“Long perceived by MAGA die-hards as a shifty liberal, Ivanka is now mostly beloved on the right, where she polls better than her father in the critical states of the industrial Midwest — leading to speculation on mid-tier news sites that she might replace Mike Pence on the 2020 ticket and to fans’ dreams about Ivanka 2024,” Grigoriadis writes. “In the meantime, conservatives of many stripes are bowing at her feet.”

Grigoriadis speculates that if Ivanka Trump doesn’t remain in Washington, D.C. after her father’s presidency, it is unlikely she will return to New York City. She might consider living in Israel or in Florida, but moving back to her home town is unlikely, according to Grigoriadis.

Her “friends seem to think Ivanka won’t come home to New York after Washington,” Grigoriadis writes. “She’s too thin-skinned for that, too likely to be hurt by slights. And she probably wouldn’t want to.”