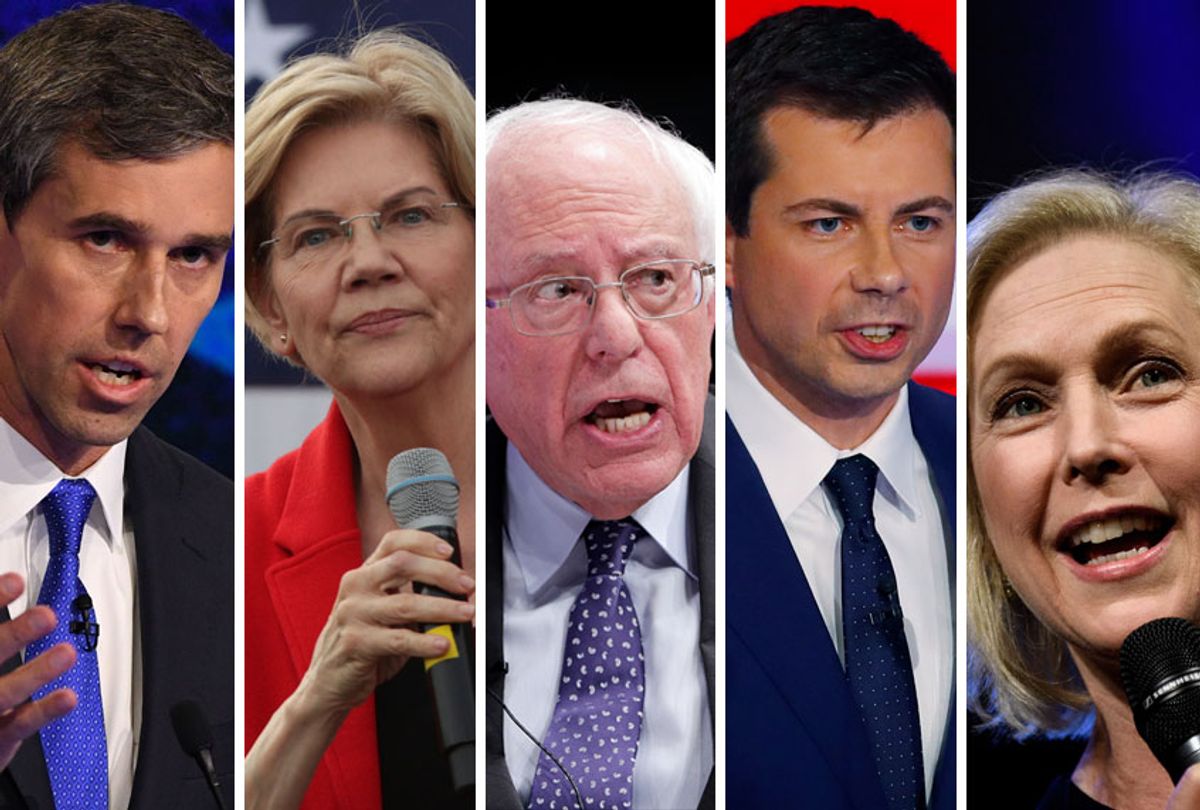 After a mass shooting, inspired by white nationalist talking points regularly amplified by Donald Trump and the pundits at Fox News, resulted in the 22 deaths in El Paso, TX, Trump and his allies have been focused like a laser on one goal: Helping Trump evade political responsibility so that he can keep stoking violent racism.

They were relatively successful in previous efforts at this, helping Trump wiggle out of accountability for spreading the rhetoric that inspired a synagogue shooting in Pittsburgh, Pennsylvania, and a series of attempted assassination-by-bombings inspired by Trump. This time,  however, it feels different, in no small part because this time, a number of Democratic politicians are explicitly holding Trump accountable.

Now conservatives, prioritizing covering for Trump over preventing future attacks, appear to be mounting a pressure campaign geared at intimidating Democrats out of speaking the obvious truth, which is that Trump is a racist who repeatedly and passionately promotes white nationalist ideas. But Democrats should pay no heed. Not only is calling Trump out by name the right thing to do, it's also a show of courage that will appeal to voters in 2020.

Friday morning, Axios ran a piece claiming anonymous Trump campaign staff are secretly thrilled that "Sens. Elizabeth Warren, Bernie Sanders and Kirsten Gillibrand, as well as Beto O'Rourke and Pete Buttigieg, have all publicly called the president a white supremacist." Why? Well, these campaign staff tried to argue, this "will actually help [Trump] win in 2020" because it's "not only emboldening his base, but also alienating some mainstream Republicans who think Democrats have gone too far."

Should Democrats running for office take this helpful advice on how to beat Trump being offered by people trying to elect Trump? No, of course not. This is classic concern trolling, which is when your political opponent pretends to be offering "advice" when in fact they are trying to scare you off using rhetoric they legitimately fear is hurting them.

The reality is that Trump and his allies are quite clearly not happy about either Trump or his rabid supporters at Fox News being labeled white supremacists. Tucker Carlson, who regularly advises Trump and whose show on Fox News is a major conduit for white nationalist talking points such as claiming that immigration "makes our own country poorer and dirtier and more divided," went for broke earlier this week, running a segment in which he literally tried to say white supremacy is a "hoax" because the official membership of white supremacist organizations is small.

Needless to say, that makes as much sense as saying ISIS is a hoax because most of its sympathizers don't pay dues. The idiocy of Carlson's gambit was pretty quickly exposed when the inarguable white supremacist David Duke backed him up on Twitter, reminding the public that even the card-carrying white supremacists Carlson evoked get as huffy as Trump when you call them racists. Shortly thereafter, Carlson announced he was taking a vacation, which the public is meant to believe is a total scheduling coincidence.

The Trump campaign has also been on the rampage against Rep. Joaquin Castro (D-Tex.) for tweeting out a list of Trump campaign donors, writing, "Their contributions are fueling a campaign of hate that labels Hispanic immigrants as ‘invaders.’" Mostly, the attacks on Castro have been about creating a false equivalence between Trump's white nationalist rhetoric and, uh, campaign finance transparency. But there can be no doubt that a big part of the purpose is to send a signal to other Democrats that if they attempt — fairly and correctly — to connect Trump's rhetoric with the rising tide of racist terrorism, then they will be met with a tidal wave of lies and hysterics.

Donna Brazile, a former DNC chairperson who is now a handsomely paid pundit on Fox News, joined in on the idiocy by saying "both sides" are to blame and, "We're accusing each other of things that we're not and we're not lowering the volume, we're not changing the tone." Maggie Haberman of the New York Times pushed a similarly disingenuous angle, giving credence to the idea that there's any equivalence between Trump's racist rhetoric and Castro calling it out.

These mainstream media voices are amplifying the "both sides" argument that's spewing out of Trump defenders like a firehose. The Trump administration is exploiting  mainstream media terror of ever admitting any real difference between the parties, lest they seem to lack "balance." White House spokeswoman Kellyanne Conway tried to argue on a conservative show that there needs to be more focus on "antifa," which is a catch-all term for anti-fascist protesters that have not killed anyone, much less shot up any shopping centers.

And right wing Washington Post columnist Marc Thiessen tried to both-sides it by pointing out that the Dayton mass shooter "seems to have been a left-wing radical." Of course, this is a false equivalence, because the Dayton shooter's crime had no relationship to these political views, which is categorically different than the acts of terrorist violence meant to publicize views held by Trump about the supposed evils of immigration.

"Both sides" are not doing it. The number of incidents of a terrorist shooting a shopping mall or church or garlic festival to take a stand against the white nationalism Trump keeps spouting remains at zero. In contrast, there have been multiple mass shootings and attempted assassinations inspired either directly by Trump or by killers espousing his talking points about immigration.

Democrats should not be cowed into silence with these dishonest tactics. On the contrary, what this country needs more than ever in the face of all these lies and propaganda is someone who is willing to speak the plain truth: The president is a racist and his racist lies are inspiring violence. Everyone who minimizes or distracts from that fact is gaslighting the country, and for the purpose of empowering a racist who is stoking violence.

Luckily, it seems that more and more Democrats are refusing to be intimidated. Castro refuses to back down. Warren not only told reporters she agrees that Trump is a white supremacist, but then went on Twitter to make very clear that was her intention. O'Rourke, Sanders, Gillibrand, and Buttigieg have all been clear, as well.

This is the smart move. Trump's strategy at all points in time is to sow confusion, muddy the waters, and paint his critics as morally suspect like himself. The only way to counter that is to offer clarity and unapologetic moral leadership, and not give in to the urge to triangulate, which only aids Trump's efforts at painting Democrats as wimps and liars.

Plus, speaking the truth about Trump's white nationalist views is the right thing to do. People are getting gunned down in shopping centers and houses of worship. If ever there was a time for plain-spoken truth, that time is now.