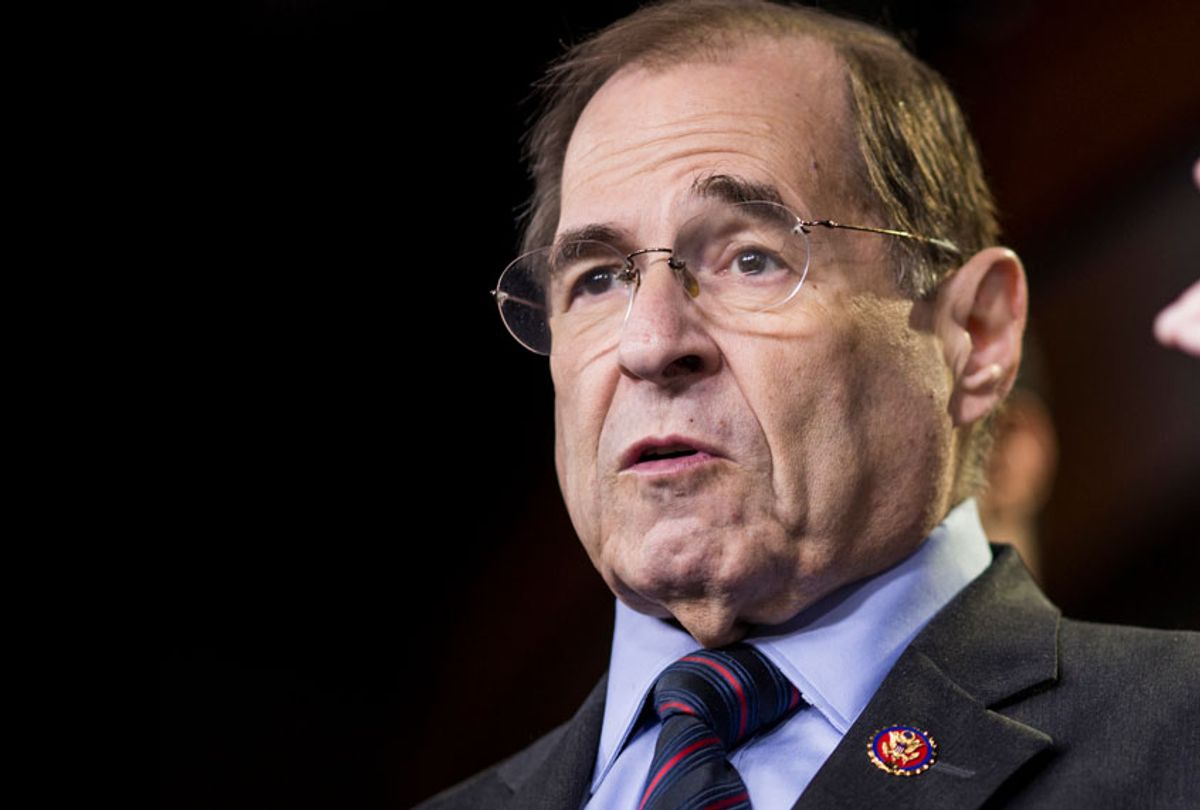 The House Judiciary Committee is officially in the midst of an investigation and legal battle to determine whether to recommend articles of impeachment against President Donald Trump by the end of the year, according to Rep. Jerry Nadler, D-N.Y., the panel's chairman.

"The fact is: We are doing an investigation. We are investigating the facts — investigating the evidence," Nadler said. "We are going into court to get witnesses all with a view toward deciding and recommending to the House whether to impeach the president."

That timeline could plant an impeachment battle in the middle of next year's Democratic presidential primary contests — a concern for Democrats who believe impeachment does not have strong public support from early-state voters more focused on other issues.

Speaker of the House Nancy Pelosi, D-Calif., has long argued that impeachment does not have public support or strong bipartisan backing, warning that moving forward with proceedings could cost Democrats the presidency — and control of the lower chamber in 2020. She has also expressed concern that impeachment in the House would send the question to the Republican-controlled Senate, where Trump would likely be acquitted, allowing the president to take a victory lap ahead of his re-election campaign.

Pelosi has advocated for a slow and methodical approach to holding Trump accountable, relying on her six investigative committees to unearth new information about Trump's alleged misconduct, focusing on his personal finances, businesses and conduct as president.

In a court filing last month, however, the House Judiciary Committee put in writing for the first time that it was weighing whether to impeach Trump — effectively arguing it needs the grand jury material related to former special counsel Robert Mueller's investigation in order to determine to recommend articles of impeachment.

The House Judiciary Committee also filed a lawsuit on Wednesday against former White House counsel Don McGahn, who previously defied a subpoena to testify before the panel at Trump's direction. The panel voted to hold McGahn in contempt of Congress in response.

In addition, more than half of the Democrats in the House support an impeachment inquiry against Trump — a key threshold that was reached last week.

As Democrats have eclipsed the halfway mark on launching proceedings and as Nadler continues to press ahead on the move, Pelosi has appeared to shift her tone, endorsing the Judiciary panel's decision to move forward with its investigation.

In a letter to her caucus earlier this week, she called Nadler's petition to obtain Mueller's underlying grand jury materials a "significant step” and quoted directly from the lawsuit to argue that House must have "access to all the relevant facts" in order to consider whether to use its constitutional power of "utmost gravity — approval of articles of impeachment."

"No one is above the law," she added.

Nadler on Thursday said Pelosi "has been very cooperative" in his panel's efforts, adding that the House speaker personally signed off on recent court filings clarifying whether to call the committee's investigation an impeachment inquiry.

Articles of impeachment have separately been referred to the Judiciary panel, but Nadler said Thursday that as its investigation continues, the committee could draw up its own impeachment articles that "more closely fit the evidence."

Rep. David Cicilline, D-R.I., a member for of the Judiciary panel, confirmed Thursday that the panel had begun impeachment proceedings.

"As @RepJerryNadler just said on CNN, we have begun impeachment proceedings on the Judiciary Committee," Cicilline tweeted. "Let’s see where the facts take us and hold this President accountable."

But Rep. Doug Collins, R-Ga., the panel's ranking member, pushed back against Nadler and Cicilline's characterization, tweeting on Thursday: "Chairman Nadler is either uninformed about what a formal impeachment inquiry is or he is deliberately misleading the American public to score cheap political points. Which is it, Chairman?"