Jerry Nadler reportedly pushed to begin an impeachment inquiry against Trump, only to be rebuffed by Nancy Pelosi 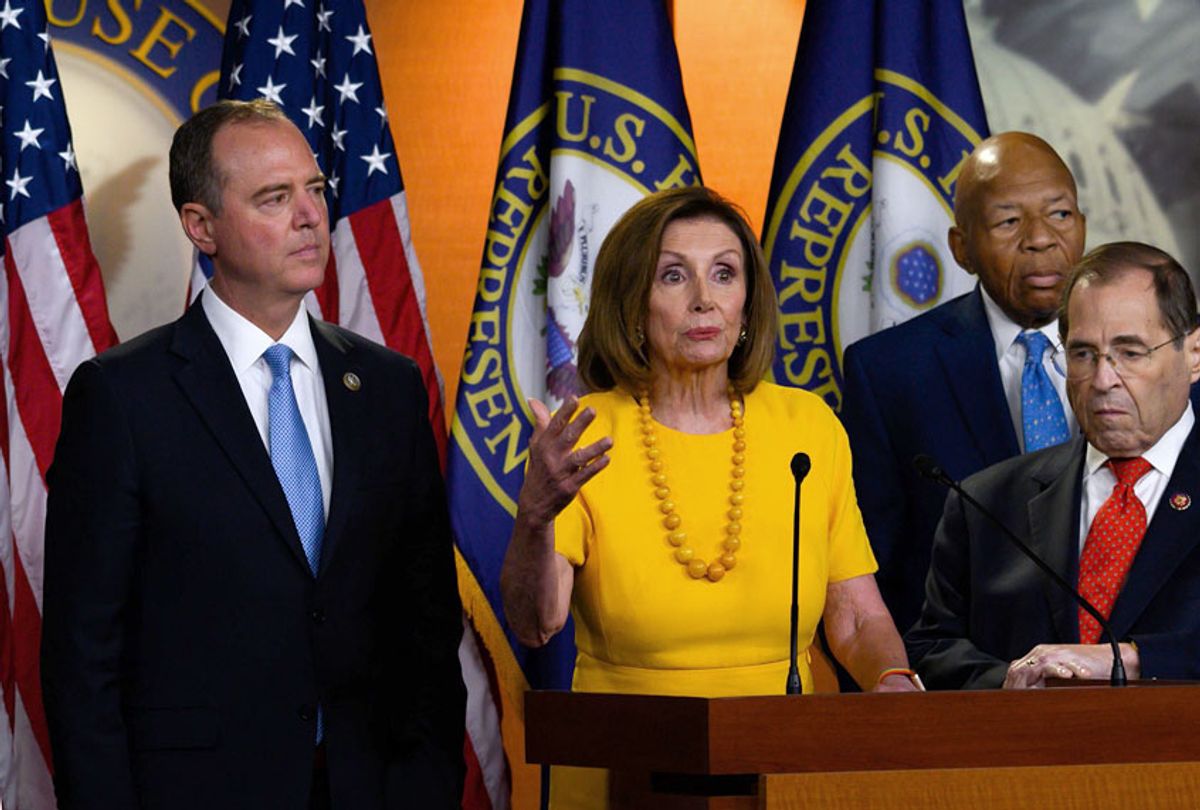 House Democrats do not appear any closer to reaching a decision on whether to initiate impeachment proceedings against President Donald Trump in the wake of former special counsel Robert Mueller's public testimony before Congress.

In a closed-door meeting Wednesday evening, House Judiciary Chairman Jerry Nadler reportedly pushed to begin an impeachment inquiry against Trump — the third or fourth such effort he has made over the past two months, only to be rebuffed by Speaker of the House Nancy Pelosi each time.

Nadler, D-N.Y., whose committee has the power to initiate an impeachment inquiry, indicated his panel could press ahead on its own. He reportedly pushed back against Pelosi by arguing that polls showed limited support for removing President Richard Nixon from office in 1973, but that public support grew as more evidence came out.

Pelosi, D-Calif., reportedly remained firm, reiterating during the meeting that she was not open to launching an impeachment inquiry against Trump at this time. She has long argued that a rush to impeachment does not have public support or strong bipartisan backing, warning that moving forward with proceedings could cost the Democrats the presidency and control of the House of Representatives in 2020.

Earlier on Wednesday, Pelosi said at a press conference: "My position has always been whatever decision we make in that regard has to be done with our strongest possible hand, and we still have some outstanding matters in the courts. It's about the Congress, the Constitution and the courts."

She emphasized that Democrats need more information before considering impeachment.

"We want to have the strongest possible case to make a decision as to what path we will go down," Pelosi said, adding that the time and information lawmakers have before making a decision over impeachment is not "endless."

Like Nadler, the California Democrat also cited how the impeachment process against Nixon came about.

"Remember, Watergate was when they got the information in the tapes that broke the case," Pelosi said. "If it comes to a point where the cone of silence, and the obstruction of justice and the cover up in the White House prevents us from getting that information — that will not prevent us from going forward, and that is even more grounds to go forward."

"If we go down that path, we should go in the strongest possible way," she concluded.

Pelosi's comments followed a busy news day on Capitol Hill. They came shortly after Mueller concluded his highly-anticipated testimony before the House Judiciary and the Intelligence Committees about his nearly two-year investigation into Russian interference in the 2016 election, alleged ties between Trump's campaign and Moscow and whether the president himself obstructed justice.

For months, Pelosi has opposed opening an impeachment inquiry. She even asserted her belief in May that she thought Trump wants to get impeached.

"He knows it's not a good idea to be impeached, but the silver lining for him is then, he believes, that he would be exonerated by the United States Senate," she said at the time.

Pelosi rejected the idea that the House would not move forward with impeachment just because the Senate is controlled by Republicans.

"The stronger our case is, the worse the Senate will look for just letting the president off the hook," Pelosi said.

During the hearings Wednesday, Mueller reiterated the conclusions of his investigation into Russian interference in the 2016 election, alleged ties between Trump's campaign and Moscow and whether the president himself obstructed justice. He made clear his investigation did not exonerate Trump on obstruction of justice and said his probe was not a "witch hunt," as the president and Republicans in Congress have argued.

Democrats largely focused on the second part of  Mueller's report dealing with possible obstruction of justice by the president, while Republicans expressed outrage at the former special counsel's decision not to clear the president’s name. The GOP grilled Mueller over the origins of his probe, which they believe are politically-motivated.

Also on Wednesday, Nadler said the House Judiciary Committee would go to court this week in an attempt to obtain requested grand jury material connected to Mueller's investigation and to enforce a subpoena issued to former White House counsel Don McGahn.

The New York Democrat said he wants to hear from McGahn, who Trump directed to fire Mueller in 2017, according to the special counsel’s report. McGahn refused to make the call and was prepared to resign rather than carry out the president's request, the documents says.

Nadler on Wednesday said enforcing the subpoena issued to McGahn would not only compel his testimony, but it could also prompt those of other key witnesses to appear before the panel.

"That's particularly important, because the excuses that the White House gives for McGahn not testifying — and the nonsense about absolute immunity, etc. — are the same excuses for all the other fact witnesses," Nadler said. "And, if we break that, we'll break the logjam."

McGahn previously defied a subpoena to testify before the panel about Mueller's probe. Nadler said at the time that Trump instructed McGahn to reject the subpoenas. The panel, in response, voted to hold him in contempt of Congress.

McGahn was a key witness for the former special counsel throughout his investigation. In his final report, Mueller detailed ten instances of possible obstruction by Trump, including one in which Trump instructed McGahn to have Mueller fired in the summer of 2017 because of alleged "conflicts of interest." McGahn declined to do so, according to the report, deciding he would "rather resign than trigger what he regarded as a potential Saturday Night Massacre."

"I don't care what [McGahn] says — it doesn't matter," Trump said at the time.

McGahn is just one of a number of former White House officials from whom the Judiciary panel is seeking testimony as part of its ongoing investigation into allegations of obstruction by the president.

Trump addressed Mueller's testimony Wednesday evening. He told reporters that "we had a very good day today." And I e described the Republican lawmakers who questioned Mueller as "incredible warriors" who "defended our country."

"If you listen to the internet, this was one of the worst performances in the history of our country," Trump said of Mueller. "This was a devastating day for Democrats."