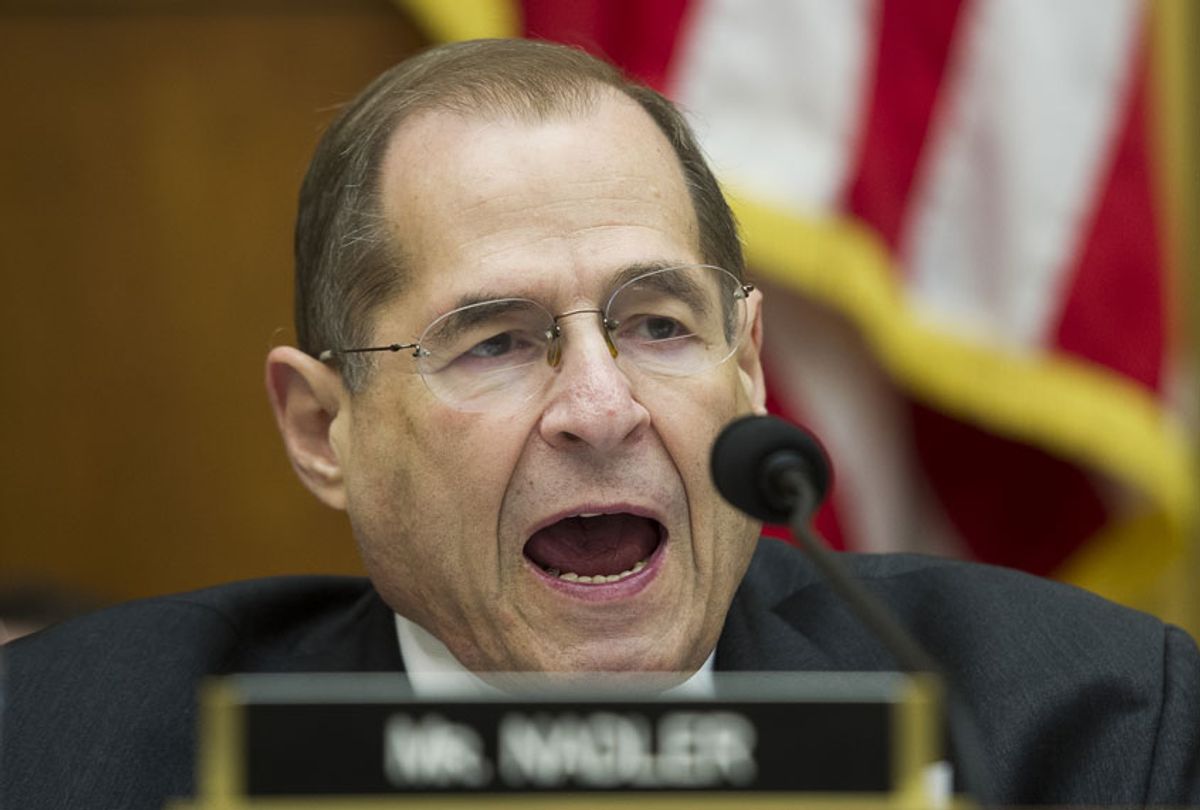 House Judiciary Chairman Jerrold Nadler, D-N.Y., announced Friday that his committee would file a lawsuit against the Justice Department on Saturday in an attempt to obtain requested grand jury material connected to former special counsel Robert Mueller's report into Russian interference in the 2016 election.

"Because Department of Justice policies will not allow prosecution of the sitting president, the United States House of Representatives is the only institution of the federal government that can now vote President Trump accountable for these actions," Nadler said at a press conference Friday afternoon, quoting from the lawsuit his committee is set to file in court.

The New York Democrat said his panel has already "in effect" been conducting an impeachment inquiry against the president — and noted in the court filing that "articles of impeachment are under consideration as part of the committee's investigation, although no final determination has been made."

Nadler argued the House must have access to Mueller's underlying evidence in order to determine "whether to exercise its full Article I powers," including recommendations for articles of impeachment.

Nadler was joined by several Democrats at the news conference Friday. Rep. Veronica Escobar, D-Texas, said: "We're crossing a threshold with this filing, and we are now officially entering into an examination of whether or not to recommend the articles of impeachment."

"From my personal point of view, we are in an impeachment investigation," Raskin said.

The announcement came two days after Mueller appeared before the House Judiciary and Intelligence Committees. His testimony reiterated the findings of his sweeping investigation into Russian interference in the 2016 election, alleged ties between Trump's campaign and Moscow and whether the president himself obstructed justice.

Mueller's testimony was widely interpreted to have had less political peril than anticipated. He was extremely cautious, lawyerly and refused to step into the fray of partisan politics, depriving Democrats of potentially useful sound bites of him discussing some of the most politically damaging material he uncovered aloud and dodged questions from Republicans seeking to discredit his investigation.

Some Democrats hoped Mueller's appearance would bolster their investigations into whether the president tried to obstruct justice, while other party members hoped his testimony would boost public support to launch impeachment proceedings against Trump. Republicans, on the other hand, hoped the special counsel's testimony would confirm their assertions that the special counsel's investigation was illegitimate and politically-motivated.

Trump has appeared to take a victory lap following Mueller's testimony, which he called "shocking and very sad." He also argued that Democrats "created this phony crime" by accusing him of obstruction of justice.

Nadler, on the other hand, argued on Friday that Mueller's testimony revealed that Trump "obstructed justice and abused his office."

Mueller did not reach a conclusion as to whether Trump obstructed justice, repeatedly citing guidelines from the Justice Department Office of Legal Counsel (OLC) which prevent a sitting executive from being indicted as something that from the onset of his investigation prevented him from even considering an indictment.

When asked by lawmakers Wednesday whether his findings truly exonerated the president, Mueller answered: "No." He also said Trump could be prosecuted for obstruction of justice crimes after he leaves office.

In his final report, Mueller detailed ten instances of possible obstruction by Trump, including one in which Trump instructed former White House counsel Don McGahn to fire Mueller in the summer of 2017 because of alleged "conflicts of interest." McGahn declined to do so, according to the report, deciding he would "rather resign than trigger what he regarded as a potential Saturday Night Massacre."

"I don't care what [McGahn] says — it doesn't matter," Trump added at the time.

Nadler indicated on Friday that his panel would file a civil lawsuit in "short order" sometime early next week to enforce a subpoena issued to former McGahn, who previously defied a subpoena to testify before the panel at Trump's direction. The Judiciary committee voted to hold McGahn in contempt of Congress in response.