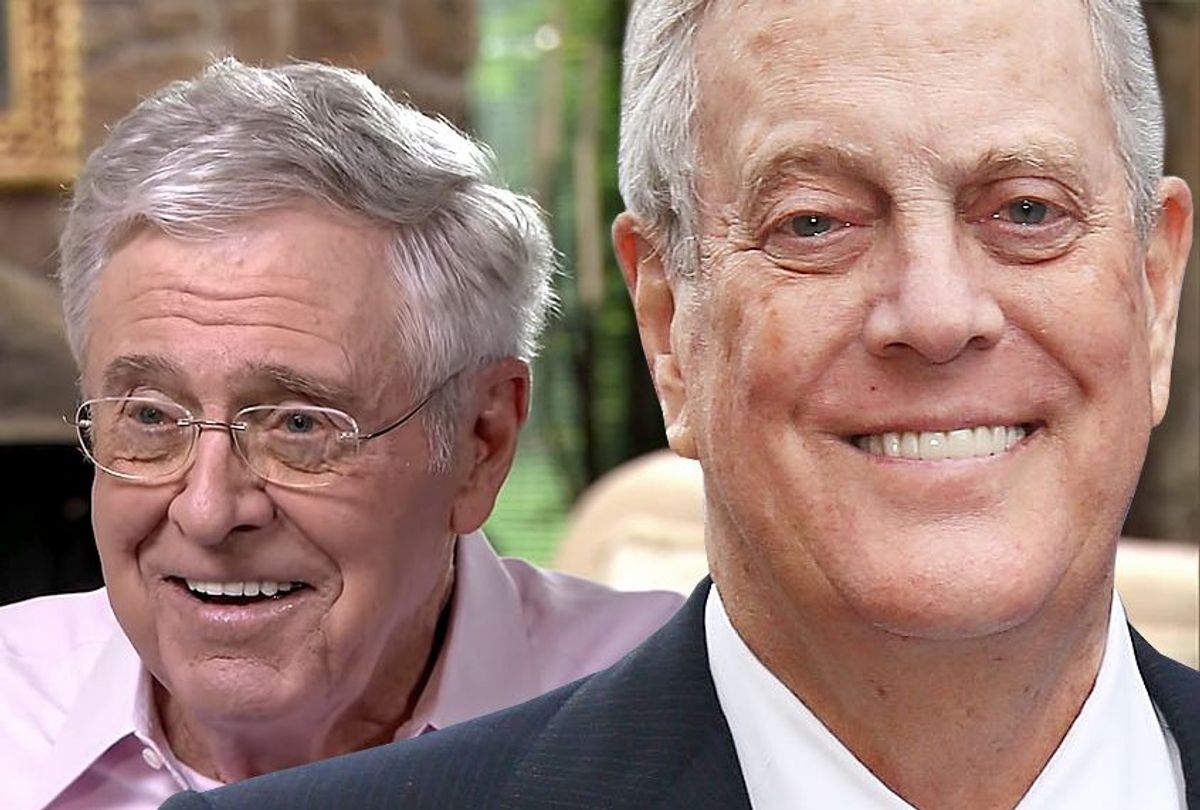 Koch Industries secretly funded a report by Third Way, a centrist Democratic think tank, to sell liberals on their trade agenda, according to the new book “Kochland” by investigative reporter Christopher Leonard.

The Kochs enlisted the help of Third Way, a corporate-funded centrist group that has long opposed progressive populists like Bernie Sanders and Elizabeth Warren, after the Democrats won control of Congress in 2006, according to excerpts from Leonard's book published by The Intercept. Concerned that Democrats were souring on free trade, which threatened their oil importation business, the Kochs sought to use the group to promote free trade to Democrats.

Third Way issued a report, titled “Why Lou Dobbs is Winning” — a reference to the right-wing Fox News host’s economic nationalist agenda — in November 2007. The report warned of a “new and powerful populist strain has emerged on both the left and the right of American politics that threatens to turn the nation fearful and inward.”

The group did not report any funding from Koch Industries or their affiliates, but it did thank Koch Industries lobbyist and former Koch executive Rob Hall “for his support in helping us conceive of and design Third Way’s trade project.”

The report warned that polls found that voters believed free trade costs jobs and benefited large companies. Leonard noted in the book that the angst over these trade policies was well founded because “they did not deliver the economic benefits they had promised to huge swaths of the American population.”

The report urged Democrats to “counter neopopulism effectively” with a “new policy and message approach that can and will be more effective” in promoting free trade.

The report was released in 2007 in coordination with two members of Congress, Rep. Joe Crowley of New York and Rep. Melissa Bean of Illinois.

“We all have to begin to speak differently about trade, how it benefits the economy and foreign policy, how it helps Americans and people abroad,” Crowley told Politico that year.

Crowley later became the fourth-ranked Democrat in the House before losing his 2018 Democratic primary race to Rep. Alexandria Ocasio-Cortez. He now works at a lobbying firm and chairs a group fighting to pass Trump’s revised NAFTA deal. Bean went on to work for JPMorgan Chase before being named chief executive of a wealth management and advisory firm.

The outreach to Third Way was far from the Kochs’ only effort to influence Democratic politics, although it has been more customary for the billionaire brothers to back Republicans. Koch Industries was also a member of the executive council of the Democratic Leadership Council, another centrist group aimed at countering progressives inside the party. Hall, whom Third Way thanked for conceiving and designing its report, was a member of the DLC’s event committee.

Third Way has continued to criticize progressive populists in recent years, particularly those who oppose free trade policies, including Sens. Elizabeth Warren, D-Mass, and Bernie Sanders, I-Vt., both of whom are 2020 presidential candidates Third Way leaders wrote an op-ed in The Wall Street Journal in 2013 attacking Warren and arguing she would take the party off a “populist cliff.” The authors claimed that “nothing would be more disastrous for Democrats” than to support Warren’s proposed economic reforms.

Earlier this year, as Warren rose in the polls of likely Democratic voters, the group changed its mind about her, arguing that Warren's policies are “manageable” because she “believes in capitalism.” The group has said it still views Sanders as an “existential threat.”

“The cat is out of the bag. The corporate wing of the Democratic Party is publicly ‘anybody but Bernie,’” Sanders tweeted after the group came around to Warren’s candidacy. “They know our progressive agenda of Medicare for All, breaking up big banks, taking on drug companies and raising wages is the real threat to the billionaire class.”