In a better, alternate universe, Patrick Swayze is still dancing with us 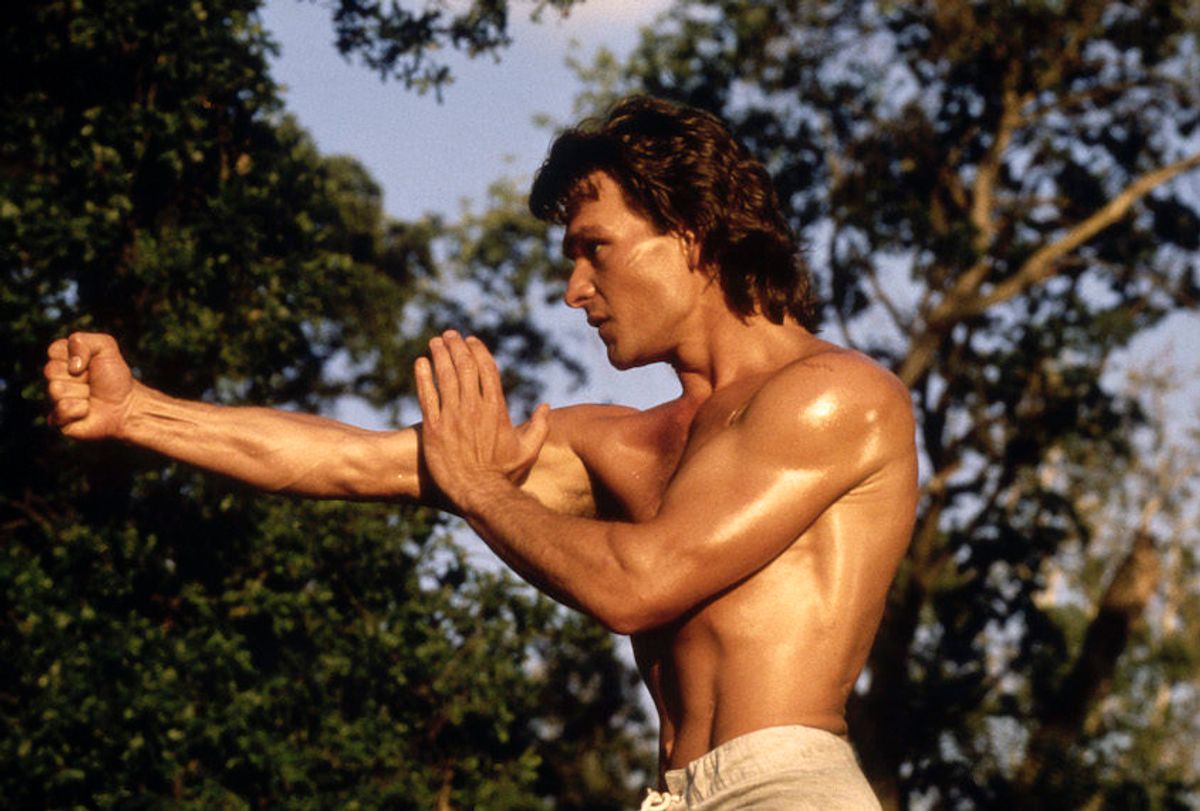 It's right all there, in the devilish way he crooks his index finger to beckon Jennifer Grey, early on in "Dirty Dancing." The swagger. The sweetness. The shine. Some celebrities are actors. And some are stars. Honey, Patrick Swayze was a star. The kind of star the world needs more than ever.

The new Paramount Network documentary "I Am Patrick Swayze" (debuting Sunday, August 18 at 9pm ET/PT) takes an unabashedly laudatory view of the life and career of the Houston-born performer, who died of pancreatic cancer in 2009. It's not a level of prestige usually afforded to a former People magazine "Sexiest Man of the Year." Yet Swayze, as the film makes abundantly clear, earned his icon status. He just happened to earn it racking up one seemingly effortless, crowd-pleasing blockbuster performance after another.

From his earliest years right to the end of his career, Swayze confidently flaunted a one-of-a-kind manliness. The son of a choreographer—he met his future wife via one of his mother's classes—he spent his adolescence playing football and calf roping. And doing ice skating and ballet. This was not a popular practice. "In Texas, if you stand out, that's a really bad thing," his widow Lisa Niemi recalls in the film. "I think Patrick figured out pretty early in life, if I fit in, I'm not going to stand out." Or as Swayze himself says in a vintage interview clip, "I had a whole process of learning what walking around what a chip on your shoulder means. I'm a ballet dancer; what of it?" In Texas, Swayze learned to dance, to compete, and when necessary, to kick good old boy ass.

After a devastating high school sports injury left him in a full-length cast for six months, he pushed himself all the harder, and then he moved to New York to study dance. But injury again followed him. After that, professional dancing was sidelined, and Hollywood was inevitable.

Swayze's entire film career, fondly recalled in the documentary by costars like Rob Lowe, C. Thomas Howell, Demi Moore, Sam Elliot and Jennifer Grey, was marked by unexpected success. He was the last key cast member hired for "The Outsiders." He took “Dirty Dancing" and "Road House," movies that in other actors' hands would have been simply cheesy larks, and drove them to become hits by throwing himself entirely into making them epic cheesy larks. He had to beg to star in “Ghost." He had qualms about "Point Break." He had to beat out 30 other actors to play a drag queen with fists of steel for "To Wong Foo...." He never achieved much in the way of critical recognition. But audiences couldn't get enough.

Yet one of his most defining performances was one that few people would even know about now. At the peak of "Dirty Dancing" mania in 1988, Swayze did a sit down with Barbara Walters. He worried ahead of time that she would try to wring an emotional response out of him. Sure enough, she asked him about the loss of his father, and sure enough, he sobbed, openly, on national television. As his agent Nicole David recalls, "The moment that Patrick became a star was when he did the Barbara Walters show, not when he did 'Dirty Dancing.' That's when my phone rang off the hook. People loved him because he was a good-looking athletic guy who cried." Yeah, he cried. As Swayze himself might have said, what of it? And that was the secret sauce of Swayze's appeal. The sheer relentless physicality of his performances remains astonishing, but it's his defiant vulnerability that shines through in everything he did. Call it nontoxic masculinity.

Writer and directer Adrian Buitenhuis, whose previous documentaries include "I Am Heath Ledger" and "I Am Paul Walker," clearly has an affinity for those rare male performers with a tender brand of strength. "I Am Patrick Swayze" similarly offers an intimate view of an unconventional star. Rob Lowe remembers how, during the filming of "The Outsiders," "He taught us how to jump on freight trains and not get thrown under the wheels." Lori Petty recalls how Swayze got so hooked on skydiving that he'd jump out of a plane every morning before going to shoot "Point Break." Yet the darker elements of his life have their place too — a hard-driving mom who "trained him to be a god, not just excellent," his dashed dreams of parenthood after his wife's miscarriage, his "off and on" drinking problem and subsequent marital problems. And all of that was a warm up for his final challenge.

Swayze's tenacious, competitive nature and his zen-like good spiritedness were never more in force than near the end of his life. He not only survived a remarkable 20 months after receiving a fatal diagnosis of pancreatic cancer, he also worked 14-16 hour days of his drama series "The Beast" while undergoing his treatments on weekends.

"I Am Patrick Swayze" airs on what would have been Swayze's 67th birthday. Looking at his legacy, it's hard not to imagine what another decade of with him might have given to all of us. A generation or so ago, the options for older male actors — especially ones who did not have a shelf full of Oscars — were limited. Now, 68-year-old Kurt Russell and 70-year-old Samuel L. Jackson steal scenes in superhero movies. At 75, Robert DeNiro still gets to be a leading man and a reliable "SNL" comic player. And 54-year-old Keanu Reeves, his “Point Break” co-star who, like Swayze, is an action hero crossed with a golden retriever, is currently enjoying one of the biggest years of his career.

In an alternate universe, sexagenarian Patrick Swayze would be putting Andy Garcia out of business as the hot old guy in every Diane Keaton movie. He would be the best thing in "Mama Mia! How Can I Resist You?" He would absolutely be playing the dad of Channing Tatum — another eminently appealing actor with a broad chest and light feet — in something. And Ryan Murphy would have scooped him up for your next great dark, weird Netflix binge, as Jessica Lange's husband with a shocking secret.

Or maybe not. In an early clip in "I Am Patrick Swayze," the star says, "The moment I started making enough money, I brought a ranch and I got away from Hollywood." What would a man of such simple tastes, such playful authenticity, make of an industry in which every public and private moment is artfully curated now? What would he make of an audience with such an easy flair for trolling and abuse? Maybe by now he'd have long ago retreated to his ranch, to live out his days with his horses and his wife and no wi-fi. Either way, I can't picture a scenario in which having him still in the world wouldn't make it a far better place. I can't picture his example that real men cry going unnoticed or unappreciated right about now. We'd all have just a little more grace, a little more dancing in our days. And I feel certain if Swayze were still with us, whatever he'd be doing, he'd be having the time of his life.