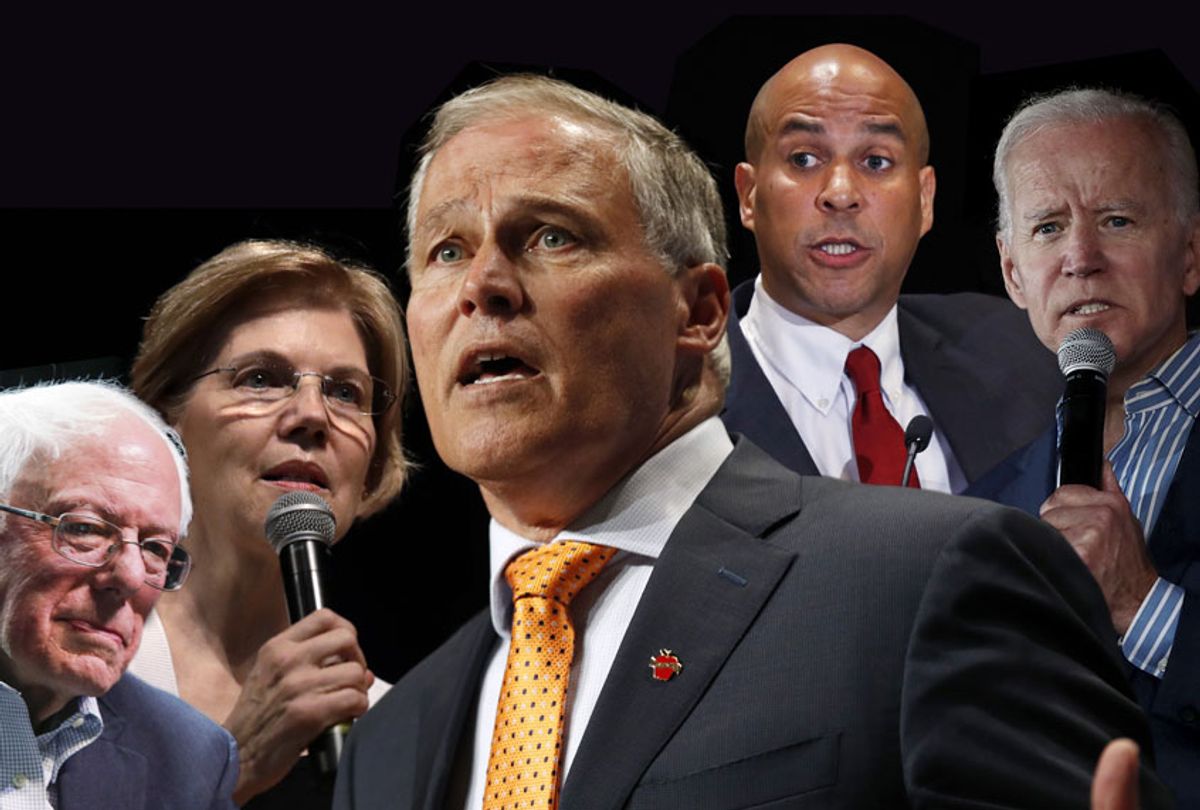 Nine Democratic presidential candidates have qualified for the party's upcoming town hall on climate change, which will be held on Sept. 4. But Washington Gov. Jay Inslee, who is the only candidate to make addressing the climate crisis the centerpiece of a 2020 campaign, will not be alongside them on the stage.

Eight of the nine qualifying candidates will participate in the town hall, according to The Hill. These include the three current frontrunners in the polls — former Vice President Joe Biden and Sens. Bernie Sanders of Vermont and Elizabeth Warren of Massachusetts — as well as lower-polling candidates like Sens. Cory Booker of New Jersey and Amy Klobuchar of Minnesota, former Rep. Beto O'Rourke of Texas, Mayor Pete Buttigieg of South Bend, Indiana, and the technology entrepreneur Andrew Yang.

Although eligible to participate in the town hall, Sen. Kamala Harris of California has declined to do so as the result of a scheduling conflict.

In order to qualify for the town hall before by the Wednesday deadline, candidates must receive at least 2 percent of voters' support in four qualifying polls approved by the Democratic National Committee. Thus, there are only two other Democrats who could wind up making the cut: Tom Steyer, the billionaire philanthropist who has been very active in progressive causes, and former Housing and Urban Development Secretary Julián Castro, who previously served as the mayor of San Antonio, Texas.

Salon spoke with Inslee in May about why he decided to make combatting climate change the focal point of his bid for the White House.

"We are facing the conclusion of a place to live that would be unrecognizable — and what year or decade that actually becomes the cliff is unknown — but it is out there and we are now facing very severe damage already today," Inslee told Salon. "This is not an issue of tomorrow. This is an issue of damage and pain today, and I've seen that from the people whose homes burned down in Seminole Springs, California, to the people whose nonprofits were flooded in Davenport, California."

The governor added, "So I think one of the points I'd like to make is that yes, there is an apocalypse out there where things become unrecognizable to us. But this is about our injury today and that's one of the reasons that people are recognizing the necessity of action today. It's one of the reasons why people in their polling have said this is now a top issue for them as it is with Democrats in Iowa, and it's one of the reasons we've had a surge of support for my candidacy since I announced what is the most substantive, robust, and comprehensive energy plan, I think clearly of anyone in the field."