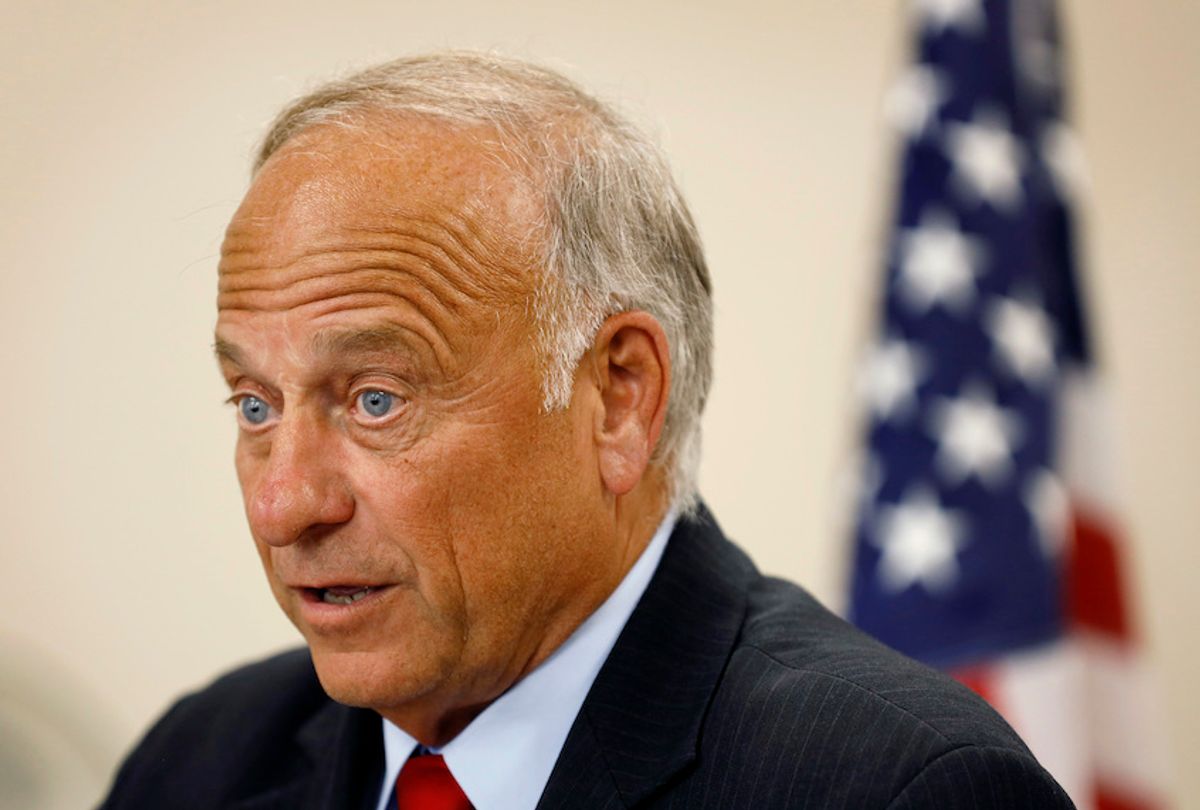 U.S. Rep. Steve King, R-Iowa, speaks during a town hall meeting, Tuesday, Aug. 13, 2019, in Boone, Iowa. King is defending his call for a ban on all abortions by questioning whether "there would be any population of the world left" if not for births due to rape and incest. (AP Photo/Charlie Neibergall)
--

Rep. Steve King, R-Iowa, is demanding an apology from both the media and Republicans in Congress after he questioned last week whether humanity would exist if rape and incest had not happened throughout history.

At a town hall in his hometown of Storm Lake, Iowa, on Saturday, King was asked if he would defend the controversial comments he made last week in which he questioned whether there would "be any population of the world left" if you did not count people who were "products of rape and incest."

The remarks, made last week at an event at the Westside Conservative Club in Urbandale, Iowa, and first reported by the Des Moines Register, sparked widespread condemnation from both Democrats and Republicans in Congress and renewed calls for King to resign.

King sought to defend himself over the weekend, blaming the controversy on a "misquote." He lashed out at the "very active and vibrant left-wing media," which he alleged had picked up the the Des Moines Register's reporting that misquoted him and decided to launch a "national, viral attack."

"Iowans are significantly more positive than they are negative, and they know it's a misquote," King said, according to a video from NBC affiliate WHO. "And so, when we have a national, viral attack that comes out on a misquote, and it's absolutely proven, all the folks that did that attack — I think they owe me an apology, including my own leadership."

The Des Moines Register and the Associated Press did issue a correction after they published King's remarks, but his comments about rape and incest were reported accurately. The news outlets said they misquoted King when he said he knew nearly 200 people who oppose exceptions for rape and incest, because they understand the fetus is not to blame for such instances. The Des Moines Register also published video of King's comments, which he made as he defended his belief that abortion should be prohibited after the detection of a fetal heartbeat, even in cases of rape and incest.

Also on Saturday, King sought to defend his stance on abortion and the legislation he has drafted, which would ban the procedure after the detection of a fetal heartbeat,  which can occur as early as six weeks of pregnancy — before many women know they are pregnant.

"I did not allow exceptions for rape and incest in that bill, because those babies that are born as a product of those activities [rape and incest] are as precious as you are or any of my grandchildren are," King said, per CNN.

King has a long and documented history of making remarks widely viewed as racist or offensive to minorities.

In the past, he has expressed support for far-right politicians, including Hungary's far-right prime minister Victor Orbán — an outspoken white nationalist who has argued for a ban of non-white immigration to his country — and the Dutch politician Geert Wilders.

King also re-tweeted a statement from well-known British Nazi sympathizer, Mark Collett, who was a subject in the 2002 documentary, "Young, Nazi and Proud." He defended his move by claiming that he did not know about Collett's affiliations.

Earlier this year, House Republican leaders stripped King of his committee assignments after he questioned how the terms "white nationalism" and "white supremacy" had become offensive.

In the wake of King's comments last week on rape and incest, House Republican leaders, as well as King's Democratic and Republican challengers in Iowa's 4th District, condemned his remarks.

House Minority Leader Kevin McCarthy, R-Calif., and House Minority Whip Steve Scalise, R-La., said King's recent comments underscore why he had been stripped of his committee assignments earlier this year, although both stopped short of calling for further action.

"This isn't the first time I've had concerns with what Steve King has said," McCarthy said last week. "I think this just continues to show why that action was taken."

Asked last week if he believes King should step down, President Donald Trump claimed that he was not familiar with "the situation."

"It looked like — I read a statement that supposedly he made. I haven't been briefed on it," the president said. "But certainly it wasn't a very good statement."