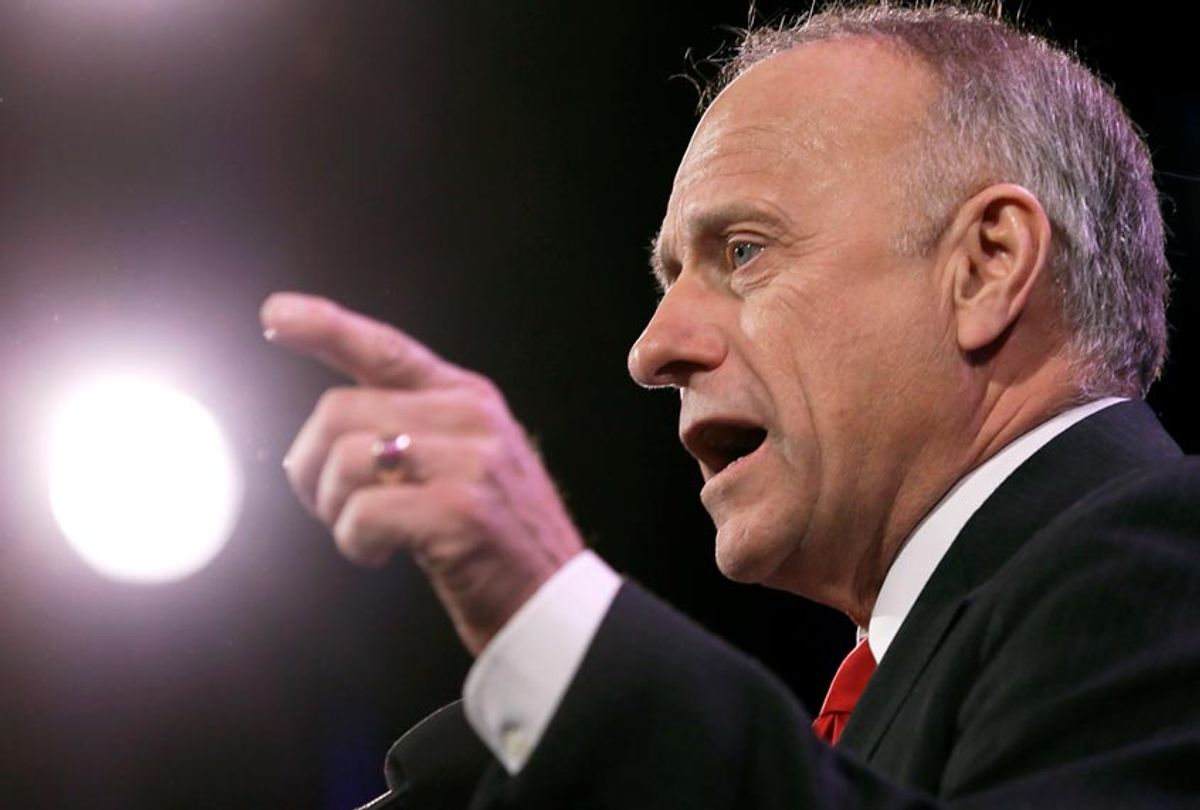 Rep. Steve King (R-Iowa),  the most overtly racist member of Congress who withstood a competitive bid for re-election against Democratic rival J.D. Scholten in Iowa's 4th Congressional District during the 2018 midterm election cycle, did not deny making racially-charged remarks to the New York Times earlier this week about white nationalism and white supremacy — although he insisted in an follow-up interview that he rejects both of those mindsets.

"I reject white nationalism. I reject white supremacy. It's not part of any of my ideology," King told NBC News Thursday. "I reject anyone who carries that ideology."

King insisted that he was really talking about "the continuation of applying labels onto people as freely as they are."

King came under intense scrutiny after he told the Times, "White nationalist, white supremacist, Western civilization — how did that language become offensive? . . . Why did I sit in classes teaching me about the merits of our history and our civilization?"

Asked why he made that comment, King told NBC News, "That was in the context of a long interview for the New York Times."

"I will accept this idea that I've supported Western civilization for a long time, and that’s the foundation of the American civilization," King added. "But 'American' means people of all races, all ethnicities, all national origins. And we're pretty proud of that."

After the story was published Thursday by the Times, the newspaper said King issued a statement, in which he described himself as a "nationalist" and supporter of "Western civilization's values." However, he added of "white nationalist" and "white supremacy" terminology: "I want to make one thing abundantly clear: I reject those labels and the evil ideology they define."

Regarding immigration, King has said overtly racist and insensitive comments — one of the most public being, in 2013, when he characterized some children brought into the U.S. illegally as drug mules with "calves the size of cantaloupes, because they're hauling 75 pounds of marijuana across the desert."

Before Election Day last year, King made a homophobic joke that the two women Supreme Court judges appointed by former President Barack Obama — Associate Justices Elena Kagan and Sonia Sotomayor — should elope to Cuba. He also attacked the National Republican Congressional Committee (NRCC) for backing an LGBTQ candidate. "They sent money over to support a candidate in a primary in California who had a same-sex partner that they put all over glossy mailers . . That's hard to write a check to those guys when they do that," he told an audience.

King's feud with the NRCC can be traced back to a decision by that organization's chairman, Rep. Steve Stivers of Ohio, to unequivocally denounce comments made by the Iowa congressman, such as endorsing a white nationalist running for mayor of Toronto and arguing that non-whites are superior to whites. Stivers responded to King's controversial statements by tweeting that "Congressman Steve King's recent comments, actions, and retweets are completely inappropriate. We must stand up against white supremacy and hate in all forms, and I strongly condemn this behavior."

King later replied by tweeting a statement saying that "these attacks are orchestrated by nasty, desperate, and dishonest fake news media. Their ultimate goal is to flip the House and impeach Donald Trump. Establishment Never Trumpers are complicit."

While King's overt racism has done little to hurt him among the Republican Party establishment, it has cost him the support of corporate donors like Land O'Lakes and Purina. During the 2018 midterm election cycle, Sioux City Journal, a major Iowa newspaper, also took the unprecedented step of endorsing King's Democratic challenger, J. D. Scholten, over the incumbent congressman himself because he "holds up this district to ridicule and marginalizes himself within the legislative body he serves, neither of which provides benefit to Iowans who live and work here." His racism also made his 2018 re-election campaign against Scholten much tighter than might have otherwise been expected in a traditionally-red district.

King has attracted negative attention since the 2016 election for expressing support for far-right politicians such as Hungary's far-right prime minister Victor Orbán — an outspoken white nationalist who has argued for a ban of non-white immigration to his country — and the Dutch politician Geert Wilders.

He also retweeted a statement from well-known British Nazi sympathizer Mark Collett, who was a subject in the 2002 documentary, "Young, Nazi and Proud." King defended this move by claiming to not know of Collett’s affiliations. He refused to apologize for the tweet and stood by the sentiment of the comment, which falls in line with his hardline views on immigration and american nationalist ideas.

King also displays a Confederate flag on his congressional desk — a decision that cannot be attributed to supporting his state's history, since Iowa fought on the side of the Union during the Civil War — and has also attempted to block the addition of Harriet Tubman to the $20 bill. He has previously argued that he is not worried about non-whites outnumbering whites, because "I will predict that Hispanics and the blacks will be fighting each other before that happens." He insisted just last year that "we can't restore our civilization with somebody else's babies," making clear that he opposes all immigration — not just people who cross the border illegally.

He also claimed that only white people had made meaningful contributions to human civilization. King's comments have received glowing praise from far-right activists, including from neo-Nazi Andrew Anglin, who called the congressman a "hero" and described him as "basically an open white nationalist at this point."