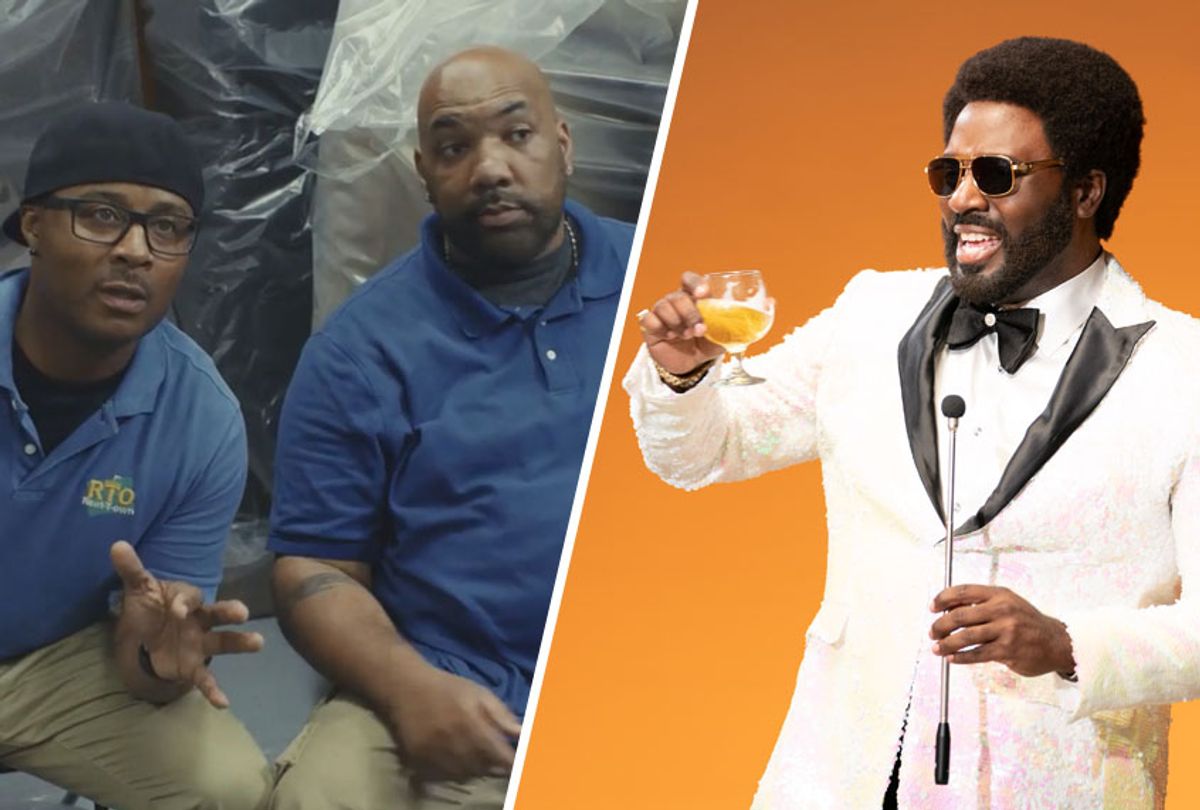 It can take years for TV writers to land a gig on an established show, let alone get their own concepts made into a series. It's even more unusual for first-time series executive producers and creators to witness two of their long-gestating series debut at the same time, or air new episodes within the same hour.

But this is where comedy writers Bashir Salahuddin and Diallo Riddle find themselves, with the successful launches of the side-splitting variety show parody "Sherman's Showcase" airing Wednesdays at 10 p.m. on IFC,  and "South Side," also currently airing on Wednesdays, but at 10:30 p.m. on Comedy Central.

Each comedy presents a vision of black American life that is infrequently depicted on TV.  "South Side" mines laughter from the struggles of the working poor on Chicago's South Side, a place typically associated with tragedy and portrayed in dramas . "Sherman's Showcase" is a spoof that celebrates the black music experience, flavored with a sweetly absurdist spark that recalls "Pee-wee's Playhouse."

"To some Hollywood development folk, there's only one type of black person," Salahuddin told Salon in a recent interview with him and Riddle, which took place in Los Angeles. "Now Diallo and I are like, 'that's ridiculous,' because we were two blue-collared black guys who happen to go to Harvard,  and have a lot of the same comedy influences, like 'Pee-wee's Playhouse' and 'The Simpsons.' In the DNA of our experience is that every single person is different. And you see that in the DNA of both of our shows."

The two got a sense of the  audience's hunger for a varied approach when they visited Chicago to shoot "South Side."

Riddle recalls being in a Lyft with a driver who asked him about the production, "and he was like, 'Y'all making a comedy about the south side?' It sounded like an aggressively worded question," he recalled.  But when he replied in the affirmative, the driver said, "'Thank you. People need to see the other side of this place.'"

Salahuddin, who grew up in Chicago, said he was tired of being asked by executives if a show like "South Side" would be "gritty enough."  "Is it gritty enough?" he replied. "I lived this."

His response to this misperception is a defiantly raucous show that can be loosely described a workplace comedy that delights in the characters working at a "Rent-T-Own" — or "RTO" — a seeming parody of Rent-a-Center.

Of course, "South Side" is less about the drudgery of the job than the foolishness its employees get into as they navigate Chicago's Englewood community — witnessing and participating in everything the people who live there do just to get by. The fact that it is a straightforward, frenetically-paced laugh machine makes it stand out among the more severe portrayals of the city that we see on shows like Lena Waithe's "The Chi," Gina Torres' "Pearson," and CBS's intense limited series "The Red Line."

The Englewood RTO is a close, dingy operation that profits off of misfortune and bad credit, leasing goods to lower-income customers and repossessing them when payments go into default. Tellingly, the team featured in "South Side" is more often seen heading out on repo runs than in the shop.

RTO employees and recent community college graduates Simon (Bashir's brother Sultan Salahuddin) and Kareem (Kareme Young)  illustrate what happens when ambition crashes against limitation. Simon scores an office job that lasts only a few hours, ending when his new boss discovers he has an arrest record. The astronomy-obsessed Kareem dreams of working at the planetarium but discovers his community college degree means nothing to the people who run it.

Simon and Kareem don't have the luxury of anger at their lot. Working for Kareem's twin brother Quincy (Quincy Young) at RTO is a survival necessity they make as entertaining as possible by diving into various misadventures and botching attempts to mount side-gigs that include everything from trying to score black-market Viagra to hawking snacks on the street.

Along with everyone else in the neighborhood, they're usually thwarted by  Sergeant Turner (Chandra Russell), who makes no effort to hide her willingness to accept bribes, and Officer Goodnight (Bashir Salahuddin), a Northsider banished to Englewood who is striving too hard to get back into his previous precinct's good graces.

Riddle's and Salahuddin's comedy forefronts the farcical nature of economic struggle, but doesn't hide the rougher aspects of Englewood life. The difference is that every character is likable. Even a local who so widely feared that RTO staffers have to ask for a police escort is written to highlight his foibles and humanity.

In the way of all great comedies, "South Side" has broad appeal while capturing the specific peculiarities of a place. One of the funniest lines among the episodes that have aired so far captures the divided feelings so many people have about Kanye West, summed up by an irate RTO worker. "I could kill that man!" she yells, adding more quietly, "But I could also kill for that man."

The hustle celebrated in "South Side" mirrors that of its creators, who turned to making web videos in 2004 to get their work out into the world. Those shorts led to positions writing for David Alan Grier's short-lived "Chocolate News" in 2008 and, afterward, gigs writing for "Late Night with Jimmy Fallon." Each has landed gigs in front of the camera since then, with Riddle appearing as a series regular on "Marlon" and Salahuddin playing the devoted husband to Cherry Bang in "Glow."

The world Riddle and Salahuddin spun together for Comedy Central is vastly different than their other work, and worlds apart from the bizarre funk carnival that is IFC's "Sherman's Showcase," a fake variety series homage to "Soul Train" and the live music performance series "The Midnight Special" infused with a Saturday morning kid show's goofiness.

"Sherman's Showcase" is fearlessly ridiculous in its presumption of the audience's familiarity with these shows and others. But even people who have never heard of Don Cornelius or Burt Sugarman, or can't even remember shows like "American Bandstand" or "Solid Gold," can access the sheer lunacy of Sherman McDaniels' show — which, according to the comedy's backstory, has been running nonstop since 1972.

The eight episodes of "Sherman's Showcase"  lampoon those half-hour paid advertisements for Time-Life music anthologies, with each episode hawking a partially complete 23-episode DVD box set for the low, low price of $19.99. At the same time, some of its funniest recurring segments are based upon real TV moments, probably the best being a series of commercials featuring Frederick Douglass showing up to school youngsters on everything from fist-fighting to drunk driving.

Thanks to the president's confusion over whether the abolitionist is still alive, that comedy callback works even if you didn't know it was based on a classic Afro Sheen commercial that aired on "Soul Train," where the historic icon rose from the grave and showed up at a young man's door to ask, "Are you going to go out into the world with your hair looking like that?"

This week's episode is a tribute to all the female artists who allegedly launched their careers on the show, hosted by none other than Mary J. Blige. Except it's not actually Blige, but a version stupendously brought to life by Bresha Webb.

But John Legend, who executive produces the series, brings along a number of famous musicians to play themselves throughout the season — including Quincy Jones, Common, and, quite unforgettably, Morris Day.

Riddle and Salahuddin are more central players here, with Salahuddin playing the egocentric host and Riddle portraying his producer Dutch Shepherd who, like everyone around Sherman, can barely stand him.  And this show calls upon Riddle's and Salahuddin's experience with writing for Fallon, where they originated popular segments like "Slow Jam the News."

Riddle recalls that they pitched TBS on a similar concept to "Sherman's Showcase," but it didn't go anywhere. A similar fate befell a pilot they created for HBO called "Brothers in Atlanta," which was commissioned in 2015 and cancelled in 2016.

Of course, that arrived before Donald Glover's "Atlanta" became a critically-acclaimed award magnet for FX. Like "South Side," that show captures the story of a place and its struggling characters; like "Sherman's Showcase," it is a work informed by feeling and aesthetic in addition to plot. However, that series' defining characteristic is its defiance of strict definition: it is neither comedy nor drama, and can be wrenchingly funny and deeply disturbing within the span of a single episode.

Riddle and Salahuddin emphatically give credit to Glover, "Black-ish" creator Kenya Barris, "Insecure" creator and star Issa Rae and Shonda Rhimes for paving the way for their two creations to finally get made and aired.

"I don't think Bashir and I have changed that much," Riddle said, "…but a little bit of it is just the industry saying, 'We know that there's a dwindling audience for a lot of our networks and the only way we're going to get them back is if we get something that's pure.' I feel like right now right now people are giving Bashir and I some leeway to try to actually create the shows that we come and say we want to create."

Both series are at the midway point in their series, with past episodes available for streaming on their respective network's apps. Riddle and Salahuddin are also pleased that they've earned rave reviews, although their experience tells them not to rest on that acclaim.

"These moments, as we all know, are fleeting," Salahuddin said. "Because at one point you looked up you had 'The Cosby Show' and 'A Different World' on at the same time. It never occurred to us back then that was a smorgasbord of quality content, and that it would not be happening again any time soon after that. I thought, 'This is the new reality, forever.'"

"I think now we're back in that moment," Salahuddin says, referring to the success he and Riddle are enjoying  in addition to the well-received work by "A Black Lady Sketch Show" creator Robin Thede, Waithe, Glover and others. "And I think that this moment should be appreciated and indulged in," he continues. "Because you never know."