Can humanity survive without the Amazon rainforest?

Massive fires in the Amazon rainforest, a result of far-right policies, call humanity's survival into question 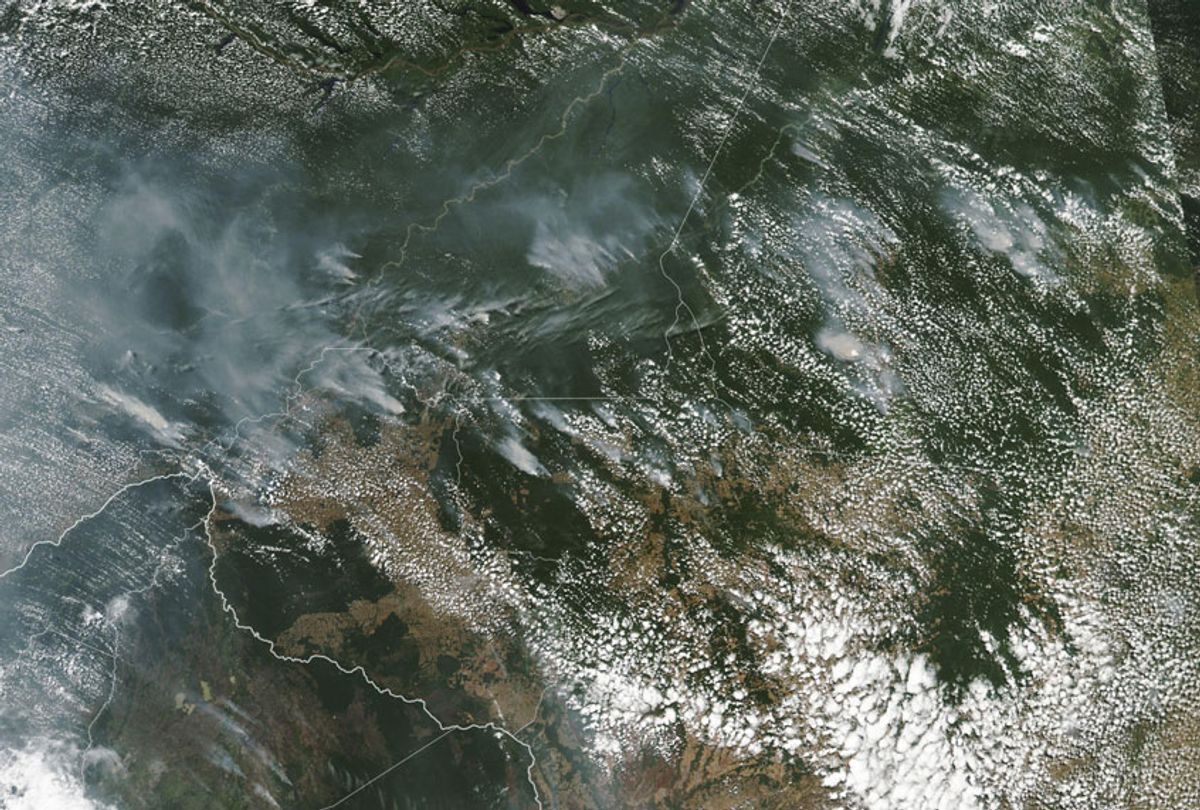 This satellite image provided by NASA on Aug. 13, 2019 shows several fires burning in the Brazilian Amazon forest. (NASA via AP)
--

No use worrying about whether you're achieving a Hot Girl Summer. This summer is uncannily hot all around the world, but especially in the Amazon.

The Amazon rainforest is the world’s largest tropical rainforest and covers much of northwestern Brazil, functioning as Earth’s "air conditioner," as it helps regulate the planet’s global temperature. This week, a Brazilian research center called the National Institute for Space Research (INPE) reported that the Amazon rainforest has experienced a 77 percent increase in wildfires in the Amazon from the same period in 2018. Multiple news outlets report that more than 9,000 of those fires have been spotted in the past week. The blazes and smoke, as NASA pointed out, are large enough to be seen from space.

Unlike in California, where wildfires have mostly been caused by atmospheric conditions and  an increase in dead tree fuel, many of the Amazon’s wildfires have been human-induced. As explained by Amazon Watch, a non-profit advocating for indigenous rights in the Amazon, the farmers who have started the fires were encouraged by Brazil’s right-wing president Jair Bolsonaro, a climate skeptic.

In July alone, the Amazon lost 519 square miles of rainforest, an area more than twice the size of Tokyo, due to deforestation.

“This devastation is directly related to President Bolsonaro's anti-environmental rhetoric, which erroneously frames forest protections and human rights as impediments to Brazil's economic growth,” Christian Poirier, Amazon Watch's Program Director, said in a statement. “Farmers and ranchers understand the president's message as a license to commit arson with wanton impunity, in order to aggressively expand their operations into the rainforest."

These unprecedented fires are not an isolated issue for South America. The fires happening this summer could contribute to climate change in an irreversible way, partly because the Amazon rainforest is the only tropical rainforest we have left.

Scientists say that global warming must be maintained at a maximum of 1.5°C warming in order to prevent the dangerous effects of climate change. The Paris Climate Agreement pledges to keep temperature increases between 1.5°C and 2°C, but as climate scientists have warned, that half degree could make a big difference in terms of destruction — which is why conserving a massive rainforest like the Amazon is critical.

Human activity, via burning fossil fuels, coal, oil and natural gas, has pumped massive amounts of carbon into the air, contributing to Earth’s temperature rising. Of course, trees are a natural way for the planet to filter and reprocessing the world’s harmful carbon dioxide output.

In the natural process of photosynthesis, trees and plants remove carbon from the air, absorb it, and release oxygen back into the air.  In total, the world’s forests suck up 2.4 billion metric tons of carbon each year. The Amazon absorbs a quarter of that total.

Romulo Batista, a Forest Campaigner for Greenpeace in Brazil, explained to Salon that every single tree in the Amazon helps “control the humidity and how the heat is exchanging in different parts of the world.”

“It is the air conditioning of the world,” he said.

However over the last few decades, scientists have warned that the Amazon rainforest is losing its ability to soak up carbon due to tree loss. According to a 2015 report, through analyzing data through 2011, the rate of tree growth in the Amazon forest has remained static in the last several years, but a number of trees dying each year is increasing.

The trees of the Amazon rainforest also release water vapor into the air which creates a process known as “flying rivers” in the atmosphere. These flying rivers help circulate water and weather patterns around the world.

As explained by the Food and Agriculture Organization of the United Nations, flying rivers are a result of the process of evapotranspiration, which is when forests replenish the supply of water vapor in the atmosphere.

“As much as 70 percent of the atmospheric moisture generated over land areas comes from plants, which has important impacts on water availability across landscapes,” the United Nations asserts. “Atmospheric moisture generated by forests not only affects water availability in the local catchment, it is also transported into other regions or even continents by prevailing winds.”

When the Amazon rainforest functions as it should, it creates a positive feedback loop. Unfortunately, the reverse is happening currently, which is bringing the rainforest toward an irreversible tipping point, one that scientists can’t predict.

“The biggest problem is once we have more of this change of climate in the Amazon, it gets harder, drier, more fires, and that becomes a cycle that can achieve the tipping point,” Batista told Salon.

Some models predict that by the year 2050, temperatures in the Amazon will rise between 2 and 3°C. Coupled with a  decrease in rainfall, and deforestation, the Amazon rainforest may transform into a dry savanna. And the deaths of trees, through human deforestation, is only expected to advance this process.

“Human activities such as deforestation, logging, and settlement obviously work in tandem with climate change and increase the drying effect that leads to forest fires,” the World Wildlife Fund for Nature explains. “For example, mortality of trees, which increases the fuel load for fire, has been observed to increase under dry conditions that prevail near newly formed edges in Amazonian forests from land clearing and harvesting.”

As far as what people can do, many outlets have been recommending to donate to non-profits that protect the Amazon. But as Amazon Watch has explained, the issue of deforestation is the result of countries and companies profiting off the rainforest's destruction.

"Indigenous people of the Amazon have been sounding the alarm about risks to the rainforest for years and resisting the destruction — sometimes at the cost of their own lives," Moira Birss, Amazon Watch's Finance Campaign Director, said in a statement. "Now that the world is finally paying attention, it's important to also understand that governments and companies around the world are emboldening Bolsonaro's toxic policies when they enter trade agreements with his government or invest in agribusiness companies operating in the Amazon."