Donald Trump and the Jews: He's exactly why most of us vote for Democrats 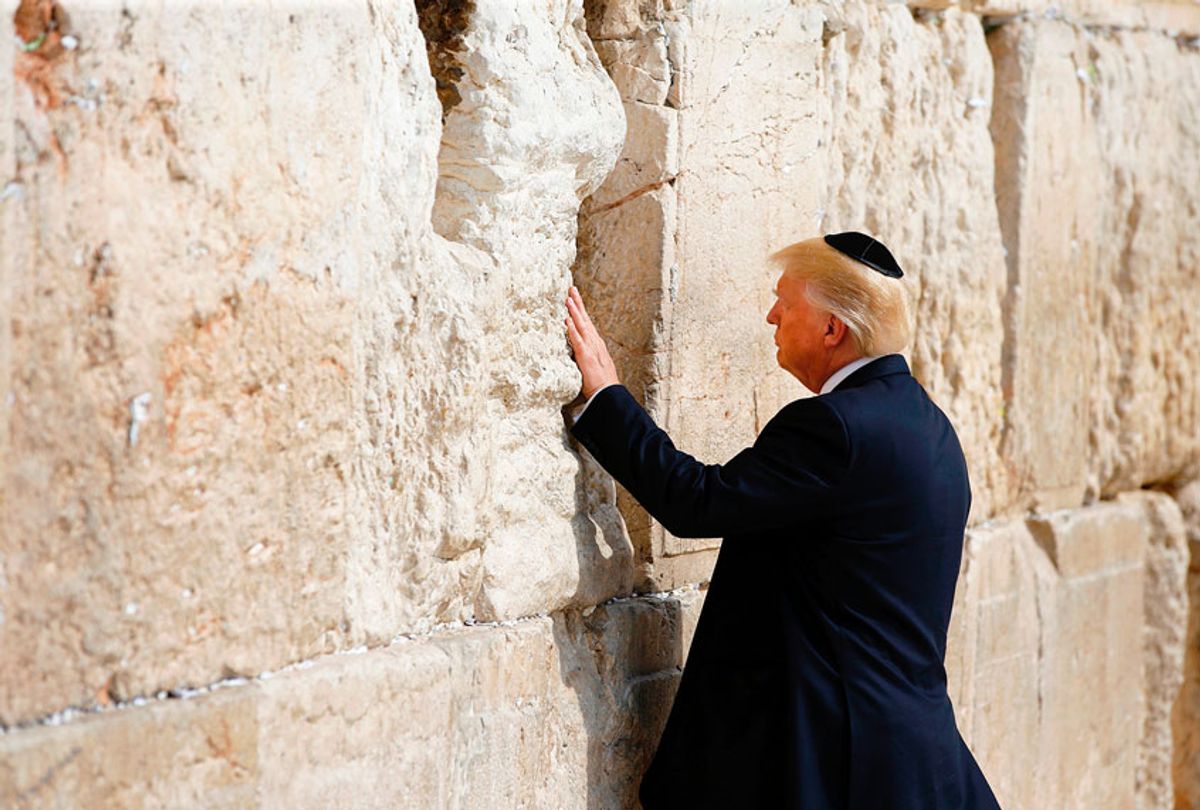 If President Trump doesn't understand why a large majority of American Jews are Democrats, maybe he should take a look in the mirror.

In case you need a quick refresher, Trump sparked an enormous furor on Tuesday when he said, "I think any Jewish people that vote for a Democrat, I think it shows either a total lack of knowledge or great disloyalty." He added that "five years ago, the concept of even talking about this . . . of cutting off aid to Israel because of two people that hate Israel and hate Jewish people — I can't believe we're even having this conversation. Where has the Democratic Party gone? Where have they gone where they're defending these two people over the State of Israel?"

The "two people" Trump referred to are clearly Rep. Ilhan Omar of Minnesota and Rep. Rashida Tlaib of Michigan. I'm not aware that either of them, or anyone else in the Democratic Party, has proposed "cutting off aid to Israel."

The next day the president doubled down, retweeting a bizarre claim that Israelis "love him like he is the second coming of God" and telling reporters outside of the White House that "if you vote for a Democrat, you're being disloyal to Jewish people, and you're being very disloyal to Israel. Only weak people would say anything other than that." Trump also quoted conservative radio host Wayne Allyn Root, who disparaged American Jews for disliking him: "They don’t even know what they’re doing or saying anymore. It makes no sense!"

Actually it makes perfect sense that American Jews oppose Trump and lean Democratic. It made sense even before Trump took to Twitter and "coincidentally" decided to express admiration for Henry Ford, one of America's most notorious anti-Semites and an inspiration to Adolf Hitler. It made sense even before Trump made anti-Semitic remarks before the Republican Jewish Coalition in 2015. (When I called him out on this, neo-Nazi Andrew Anglin attacked me online.)

For that matter, the fact that most Jews are Democrats made plenty of sense long before Trump became a player on the political scene.

In fact, for as long as American Jewish voting patterns have been reliably recorded, Jews have clearly taken the position that political movements which stand for oppression anywhere are unsafe for Jews everywhere.

"American Jews have tended to vote Democratic since 1928, mostly because they perceived that their values and interests aligned more with the Democratic Party, especially on issues like immigration, civil rights, church-state separation and Israel," Jonathan Sarna, professor of American Jewish history at Brandeis University, told me by email:

Every Democratic candidate since FDR, with the exception of Jimmy Carter in his second term, has won more than 50 percent of the Jewish vote. The shift away from Carter [in 1980], whom many Jews perceived as anti-Israel, demonstrates that Jewish voters have been willing to punish candidates whom they perceive as anti-Israel, but it is important to note that many Jews voted for the third-party candidate, John Anderson, rather than moving into the ranks of the Republican Party.

Sarna cites the election of 1928 because that was when the Democratic Party took a notable turn toward more liberal, cosmopolitan politics — and, not coincidentally, picked the first Roman Catholic major-party nominee, New York Gov. Al Smith. Ever since then, Jews became a reliable Democratic voting bloc.

Hasia Diner, a professor of American Jewish history at New York University, agreed that Jews have voted for Democrats "in national, state, and local elections since the late 1920s." She offered a succinct summary of why, also by email:

They have done so for the most part because they have accepted the basic premises of the party: calls for state responsibility for the welfare of its citizens, a state that is active for those who find themselves in need, and efforts, like civil rights broadly understood, which envision an society in which access to resources are not tied to race, religion or national origin. This formula appealed to most of them throughout this period because it worked for them and helped strengthen their own place in America as it also worked for others.

"These were, however, not Jewish issues explicitly," Diner continued, stressing that it's mistaken to view Jews as single-issue voters, when it comes to Israel or anything else:

They have not since 1948 voted for candidates in the United States on the basis of either Israel as an issue or the explicit or implicit directions from Israel. This does not hold for all Jews, but in the last few elections the numbers run about 25 percent for the Republicans and 75 percent for the Democrats, reflecting the general coincidence between the Democratic Party's larger message, as I sketched out above, and the majority of American Jews' sense that it was a message that fit their own visions of a good, or even better, America.

Sarna echoes this view, suggesting that Trump appears to believe he can turn Jewish voters against the Democratic Party by appealing to their presumed tendency to vote entirely based on the perceived interests of the State of Israel.

Across the world, in England, Canada, Australia and elsewhere, Jews have turned away from liberal parties that had once been their favorite home if those parties abandoned support for Israel. President Trump is hoping that he can help effect a similar shift in the US by painting the Democratic Party as anti-Israel and akin to the Corbyn Labour Party in England [which has been accused of harboring anti-Semites]. Whether that indeed happens remains to be seen.

At least for now, American Jews overwhelmingly tend to vote Democratic, and generally hold liberal views. Nearly all the Jewish members of Congress are Democrats — one who technically isn't would be Sen. Bernie Sanders — and all three of the Jewish justices on the Supreme Court (Stephen Breyer, Ruth Bader Ginsburg and Elena Kagan) are regarded as reliable liberal votes. For many Jewish people, although certainly not all, there is a strong historical connection between the oppressive mentality that led to the election of President Trump and the mentality of anti-Semitism.

I'm not saying all Republicans share Trump's bigoted views. That's emphatically not the case. But there is a strong undercurrent of bigotry in the modern Republican Party, one that caused Trump to be nominated in the first place and that is visible in the persecution of other marginalized groups.

In many ways, Trump symbolizes everything that makes Jews lean Democratic. While Trump has made anti-Semitic comments for years, he largely avoided those during the 2016 campaign, which focused on stigmatizing Muslim and Latino immigrants, along with  African Americans and women. When Trump added the notoriously homophobic Mike Pence as his running mate, one could safely add the LGBT community to that list. Yet it was inevitable that Trump would eventually turn his animus against the Jews because bigoted mentalities are rarely confined to a single group of people.

While the the modern Democratic Party has an imperfect record on bigotry — and until the early 1960s was allied with Southern segregationists — it has at least held out the governing ideal of resisting or overturning racism and discrimination. Gradually, Democrats came to support civil rights, women's rights and LGBT equality, even if all those areas remain contentious today.

The Republican Party, by contrast, blamed the poor for their suffering during the Great Depression, and turned sharply against civil rights during the 1960s, with the losing campaign of Barry Goldwater and then the election of Richard Nixon, driven by the "Southern strategy" of dog-whistle racism. At least in effect, Republican ideology has been closely allied with preserving the power of white, straight men and resisting equality for people of color, women and LGBT people.

Many Republicans strongly support Israel, or at least claim to. For many American Jews, that's practically irrelevant at this point. Conservatives may support Israel for theological reasons or purely strategic ones — because they hate and fear Islam — but that hardly equals a genuine sympathy for a historically marginalized and oppressed group. It's an alliance of convenience, at best.

Last year I interviewed Charlotte Pence, the vice president's daughter. She was promoting a book about her father and happened to mention a trip to Mount of Olives, a mountain ridge in East Jerusalem where some Christians believe Jesus will return to earth. When I asked her whether she thought Jews would go to hell when that happened, she avoided the question. As with so many evangelical Christians, her supposed affection for Jews struck me as anti-Semitic — because it does not actually reflect respect for Jewish people, Jewish culture or the Jewish faith.

Donald Trump isn't religious, but his attitudes toward Jews are driven by similar impulses. He views us not as distinct individuals worthy of respect in a diverse, pluralistic society, but as a collective who only matter insofar as we affirm or threaten the prevailing power structure. If we support Trump and the current Republican Party, they're willing to give us what they think we want, which is military and financial support for the State of Israel. If we dare to think for ourselves, we'll be reminded of what they think our place truly is in society.

Trump didn't create this mentality, but he is without question a product of it. As such, he offers a textbook example of why American Jews vote Democratic — and why we will continue to do so into the foreseeable future.