Despite the fact that his nation's rainforest is in flames, Brazil's president makes time for Twitter misogyny 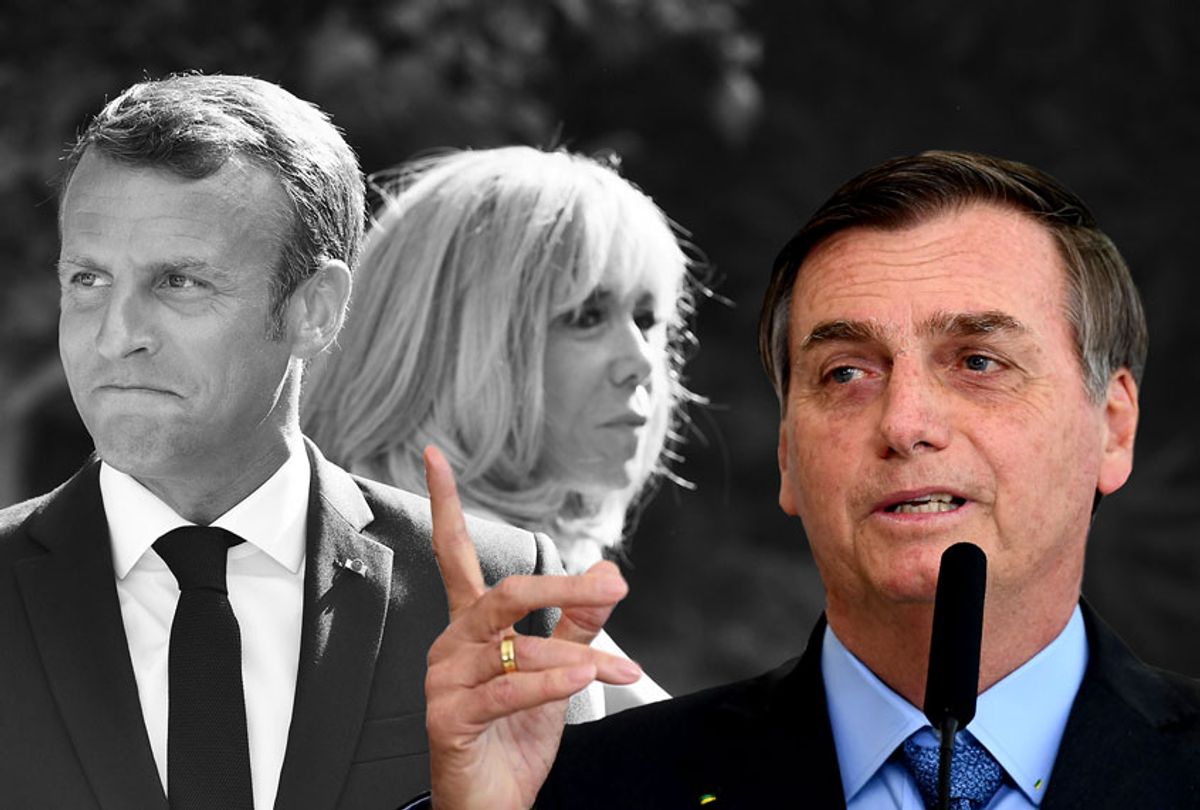 An insulting social media post by Brazilian President Jair Bolsonaro aimed at French first lady Brigitte Macron offered a window into the worldview of powerful men whose destructive policies show no regard for vulnerable populations and the planet at large, Canadian author and activist Naomi Klein observed Monday.

Bolsonaro remarked on Macron's appearance while she and her husband hosted the G7 summit and as thousands of acres of the Amazon rain forest burned as a result of Bolsonaro's pro-deforestation policies. Climate action groups have pointed to the president's encouragement of farmers, loggers and ranchers who want the forest cleared for their own use as a primary reason for the blazes.

On Saturday as leaders from the world's major economic powers gathered in Biarritz, France, a supporter of the Brazilian president posted a photo of Bolsonaro and his wife Michelle alongside one of the Macrons, commenting that Macron was jealous of the Brazilian president. Bolsonaro responded in Portuguese, "Do not embarrass the guy ... man, ha ha," prompting anger from critics including the French president.

"I have great respect for the Brazilian people and can only hope they soon have a president who is up to the job," Macron told the press on Monday, adding that Bolsonaro's comments were "extraordinarily rude" and a "sad" testament.

In her response to the episode, Klein — who has been an outspoken critic of the policies of both Bolsonaro and President Trump — said the dismissive and objectifying behavior toward women on the world stage by both men goes hand in hand with their shared style of governance during a time when the damaging effects of pro-corporate, pro-fossil fuel policies are becoming increasingly clear.

Anti-climate and anti-women's rights policies betray the need for both Bolsonaro and Trump to assert dominance over the the planet and women — which they know they can never truly control, Klein suggested on Twitter.

"Disdain for women's bodies and disdain for the earth are deeply connected," Klein tweeted. "Both remind idiotic baby men like Bolsonaro and Trump that they are part of web of interdependent life and not the lone heroic figures pretend to be."

Bolsonaro's comment mirrored Trump's treatment of the French first lady in 2017. On an official trip to Paris to meet Macron, Trump drew criticism from lawmakers and women's rights groups when he was caught on video telling the Macrons that Brigitte was "in such good physical shape."

Bolsonaro has undone years of work to protect the Amazon by insisting agribusiness interests should have free rein over the forest that some call "the lungs of the Earth." Meanwhile, Trump has opened up 378 million acres of public lands for oil and gas drilling, refused to take part in global agreements to curb the climate crisis, and imposed punishing tariffs on burgeoning sustainable energy sectors in order to shore up climate-warming fossil fuel industries — which are run by some of his top financial backers.

"As a Brazilian, I'm ashamed for Bolsonaro's rudeness against President Macron," Diniz tweeted. "Sexism was the language to ventilate his fascist ideology which is commonly expressed by sexual anxiety against his political 'opponents.'"