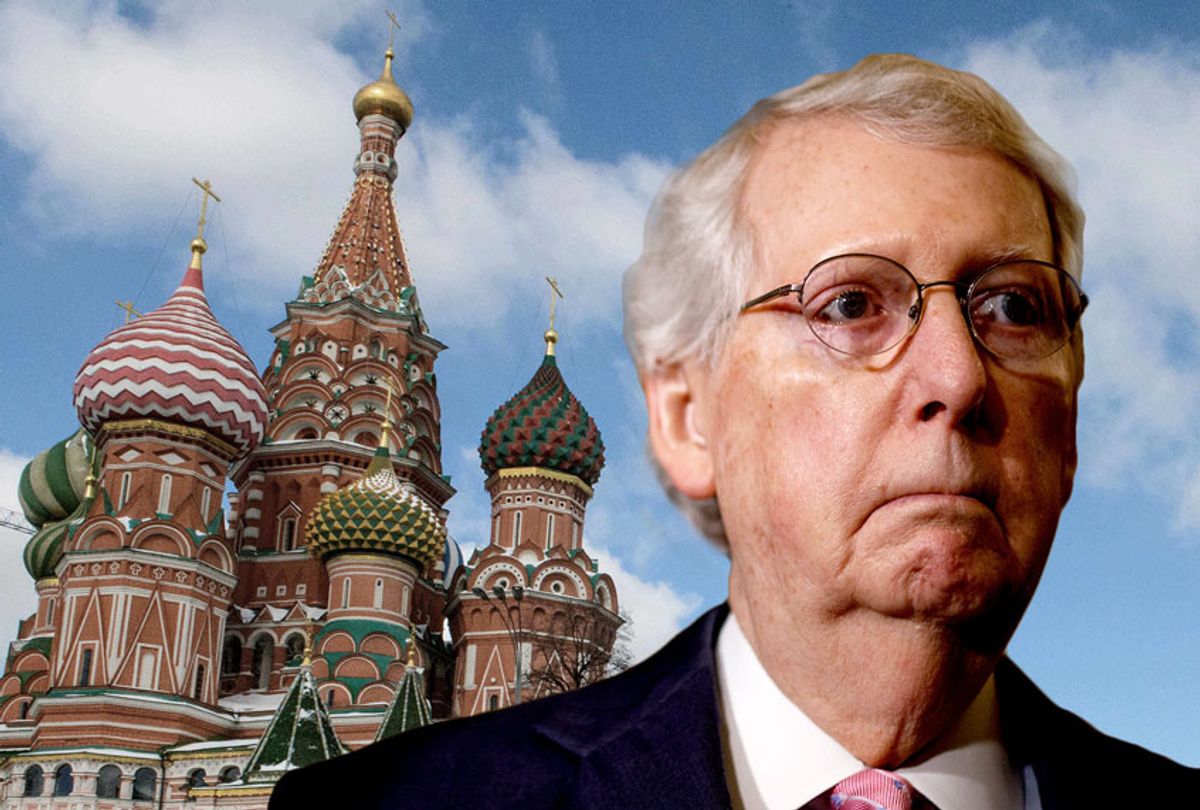 Senate Majority Leader Mitch McConnell, R-Ky., complained to right-wing radio host Hugh Hewitt on Tuesday that "Moscow Mitch," the nickname given to the top Republican by critics of his decision to block election security legislation despite documented evidence of Russian interference in the 2016 elections, was "over the top" and a form of "modern-day McCarthyism."

After Hewitt referred to the disparaging moniker as "McCarthyism," the Senate Majority Leader responded that "I mean, it’s modern-day McCarthyism. Unbelievable for a Cold Warrior like me who spent a career standing up to the Russians to be given a moniker like that. It’s an effort to smear me. You know, I can laugh about things like the 'Grim Reaper,' but calling me 'Moscow Mitch' is over the top."

Hewitt agreed, telling McConnell that "it is simply an assertion that you’re doing the bidding of Moscow, which is, of course, pure McCarthyism. I thought we were past that in this country. I really did, and especially if you’ve overseen the biggest defense spending hikes out of the Congress in a decade."

Historically speaking, McCarthyism did not refer merely to politicians who were viewed as being soft on Russia but rather those who were specifically perceived as being sympathetic to communism. McCarthyists attacked liberals by implying that their progressive politics meant they were emotionally aligned, if not outright betraying America toward, authoritarian states like China and the Soviet Union. The term "Moscow Mitch," by contrast, is not used to disparage McConnell's ideology but instead to call him out for his opposition to take up election security legislation that would prevent Russia from further meddling in America's democratic process, as it did in the 2016 elections.

Rep. Alexandria Ocasio-Cortez, D-N.Y., made a similar point after McConnell first began complaining about the nickname on the floor of the Senate in July.

"McCarthyism is the practice of baselessly accusing political opponents of being communists as unjust grounds for targeting & harassment. You are blocking action to protect US elections despite official DoJ pleas. That doesn’t make you a communist. It just makes you a bad leader," Ocasio-Cortez wrote on Twitter.

He later added, "These theatrical requests happen all the time here on the Senate. I promise that nobody involved, including my friend the Democratic leader who made the request, actually thought he’d get a Republican Senate to instantly, unanimously pass a bill that got one Republican vote over in the House."

Senate Minority Leader Chuck Schumer was unsympathetic at the time to McConnell's complaints.

"If Leader McConnell doesn't like being criticized on election security, I challenge him: Let's debate it on the floor with amendments," Schumer said in response to McConnell's speech. "I challenge him: Support additional appropriations for states to harden their election systems."

"In both cases, Leader McConnell has not done that. In fact, he has said he opposes more money to the states, even though they say — I believe it is 21 attorneys general have said they need more money," Schumer continued."Leader McConnell, despite our requests, has not only blocked unanimous consent requests but has not put any other legislation on the floor to deal with this."