Are Trump and his traitorous enablers modern-day McCarthyists? 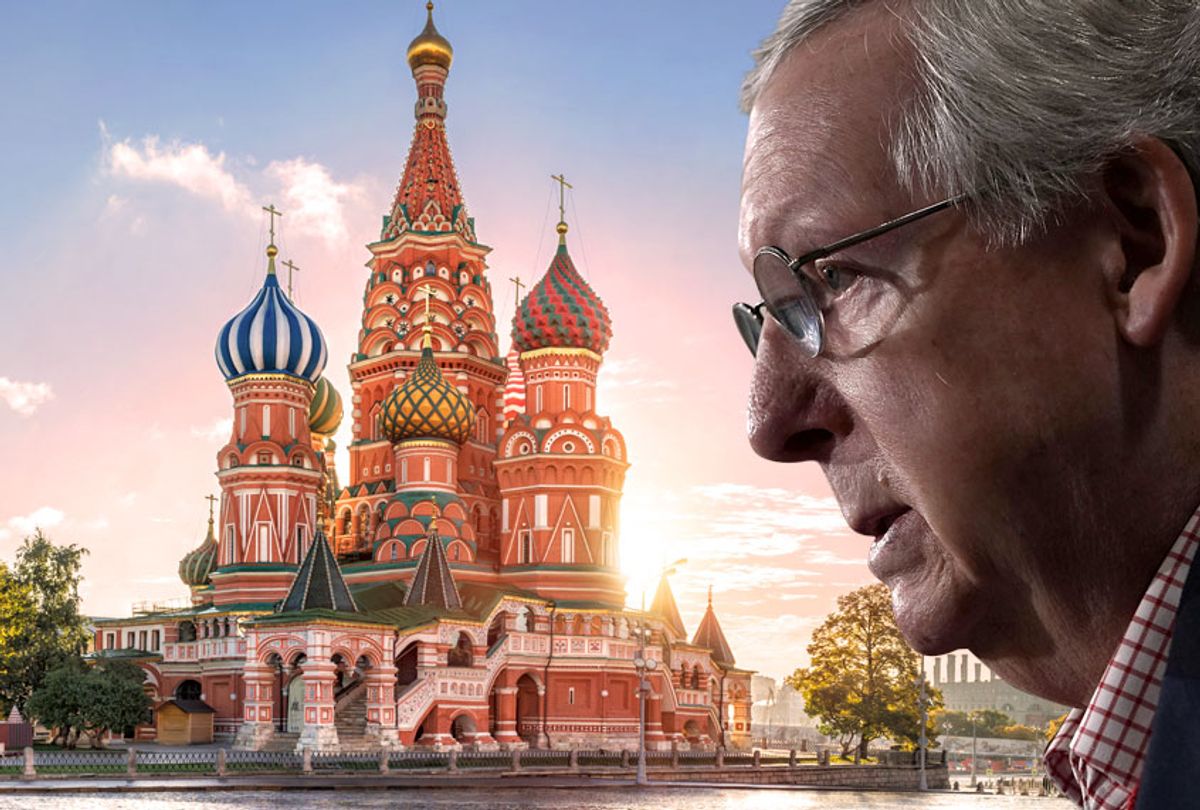 Senate Majority Leader Mitch McConnell doesn't like it when you call him #MoscowMitch. He hates it so much that he'll accuse you of being a McCarthyist for doing so. If the accusation was untrue — that is, if McConnell, President Donald Trump and other Republicans weren't empowering Russia at the expense of America for their personal benefit — then #MoscowMitch and talk of collusion in Trump's 2016 presidential campaign would be unfair, even unjust. As the facts currently stand, however, it is a perfectly fair label.

A quick history lesson. Joseph McCarthy was a United States senator from Wisconsin who served between 1947 and 1957. His political heyday, however, lasted from 1950 to 1954. On February 9, 1950, he delivered an infamous speech in Wheeling, West Virginia in which he claimed without evidence that he had "a list of 205 [State Department employees] that were known to the Secretary of State as being members of the Communist Party and who nevertheless are still working and shaping the policy of the State Department." Notice that he did not say "Russians" or "traitors to Russia." This isn't because the Soviet Union (the empire controlled by Russia during the bulk of the 20th century) wasn't America's primary geopolitical enemy at the time, or that there wasn't a valid and widespread fear of that nation. Rather it is because the assumption wasn't simply that people would betray America to Russia, but that they would do so because the Soviet Union's authoritarian left-wing ideology was being conflated with all forms of liberalism. When McCarthy warned of "Communists," he was using a dog whistle to vilify anyone whose beliefs were to the left of what he and his supporters deemed acceptable.

McCarthy and his followers continued with their attacks for the next four years, targeting anyone and everyone whose liberalism they regarded as potentially suspicious (they also went after homosexuals and other marginalized groups, although this chapter of McCarthyism tends to be less explored). They even accused wielded the accusation of "Communist" against President Harry Truman, a Democrat who was also one of history's most ardent Cold Warriors; the Democratic presidential candidate in 1952, Illinois Gov. Adlai E. Stevenson; and President Dwight D. Eisenhower, a moderate Republican. While Truman, Stevenson and Eisenhower were politically strong enough to not be ruined by their accusations, countless people without their power who dared express views that McCarthyists deemed too liberal had their personal and professional lives ruined by false accusations of being Communist. It wasn't until exactly 52 months had passed — when Army counsel Joseph Welch humiliated McCarthy on national television for smearing an innocent man — that the Wisconsin senator's reign of terror ended.

This isn't to say that his tactics aren't still used, of course. They are — but by conservatives. Whenever you hear liberals described as "communists" or "socialists," or liberal policy proposals denounced as preemptively authoritarian, it is because men and women are following McCarthyist tactics. Their goal isn't to protect America from possible treason, but to intimidate liberals by forcing them to fend off false accusations about their ideology. It is a classic example of a straw man fallacy but made worse by the facts that (a) it can be used to scare people into silence and (b) it means that policy proposals which might help innocent people won't be implemented. Indeed, everything from the 1960s civil rights movement to virtually all left-wing economic policies have been attacked by those who wish to quiet them as "socialist" or "communist."

To be clear: There were traitors to the United States working from the left during the Cold War. This was demonstrated by the successful prosecutions of spies like Alger Hiss and Julius and Ethel Rosenberg, by the funneling of money from international Communist organizations into far-left groups that wanted America to adopt a neo-isolationist position, by the revelations of the Venona papers. The point here isn't that there were no leftists who were Communists and subversives, but rather that the threat of left-wing Communist subversion was exaggerated — either due to paranoia or deliberate malice — by opponents of liberalism so that all liberals would be discredited. That, in a nutshell, is McCarthyism.

Now contrast this with the accusations against Trump and McConnell. As former special counsel Robert Mueller's report revealed, members of Trump's campaign knew that Russia was interfering in America's election in a manner that was not only illegal but "sweeping and systematic," and they actively encouraged them to do so. Trump himself publicly asked Russia to dig up dirt on Democratic nominee Hillary Clinton during a press conference that July, and one month earlier the president's son and assorted other advisers (including campaign chairman Paul Manafort, who had helped install a puppet of Russian President Vladimir Putin as president of Ukraine) met with a Kremlin-connected lawyer to likewise obtain "dirt" on Clinton.

None of these things are open to dispute. Indeed, the president's own words and those of his family and closest advisers confirm that these things are true. On the occasions when Trump's associates have denied their contacts with Russians — such as longtime Trump adviser Roger Stone did when I interviewed him in 2017 — they have usually been revealed to be liars. Stone, for what it's worth, is currently facing criminal charges for his alleged attempts to obstruct the investigation into the Trump-Russia scandal.

Where does McConnell factor into all of this?

Well, considering that the intelligence community unanimously agrees that Russia is still actively interfering in America's elections, it stands to reason that patriots on both sides of the aisle should want to beef up our election security so that our democracy will remain intact. Yet McConnell has obstructed legislation that would do precisely this, and the only logical explanation for him doing so is that he knows Russian meddling is likely to benefit Republican candidates. When he was called out on this with the insulting but deserved epithet "Moscow Mitch," he responded with a Senate speech in which he whined, "Keeping our republic means we can't let modern-day McCarthyism win. So here is my commitment: No matter how much they lie, no matter how much they bully, I will not be intimidated."

Rep. Alexandria Ocasio-Cortez, a New York Democrat who has actually been accused of being a traitor simply because of her politics, responded to an analogous McConnell tweet by writing on Twitter: "McCarthyism is the practice of baselessly accusing political opponents of being communists as unjust grounds for targeting & harassment. You are blocking action to protect US elections despite official DoJ pleas. That doesn’t make you a communist. It just makes you a bad leader."

Ocasio-Cortez is absolutely correct, of course. McConnell isn't being accused of sympathy to Moscow because his opponents lack valid grounds for criticism and are resorting to a straw man fallacy. He is being accused of this because his political actions are inscrutable except as those of a man who so badly wants his party to win that he doesn't care if Russia needs to be empowered for that to happen.

I close with an observation from former Ambassador Michael McFaul, who served as President Barack Obama's point man in Russia from 2012 to 2014 and who Trump considered selling out to Putin during the Helsinki summit last year. When I spoke to him in January, I asked McFaul about what ideology if any is held by the current Russian despot. After all, the disintegration of the Soviet Union eliminated Russia as a force for spreading Communism throughout the world. If Russia has an ideology today, what is it?

"It looks like a president is facing one of the biggest political scandals in American history because he really did have these illicit contacts with Russia, and it was a conservative Republican pushing the party and the country to the right. What does that say? How do you think someone looking at this from a distance will view that, aside from being ironic?" I asked McFaul.

"I hadn't thought of it in those terms," McFaul replied. "Thanks for reminding me. That is an ironic twist, most certainly. I don't have a great answer... I think it's in part the nature of President Trump and the people around them that this is happening, and their kind of wheeling, dealing style. Obviously, some people around him, including Michael Cohen, were trying to use his notoriety and his campaign to advance their financial opportunities. That's something new to him, but there's another piece, which is that there is an ideological affinity between Donald Trump and Vladimir Putin."

He added: "They're both kind of a self-styled conservative, self-styled nationalist, anti-multilateralist, kind of 'nation-state should come first.' I think that ideological affinity is also something that's radically new in the era that we live in, not unlike the intellectual affinities that you had from people on the left with communist organizations and communist countries during the Cold War."

In other words: We need a culture where people stop throwing stones at each other, but if rocks are going to be pelted regardless, anyone aligned with Trump needs to think very carefully about whether their house is made of glass.