Trump's advisers believe their cruelty toward vulnerable people is a strength. But it's a massive moral weakness 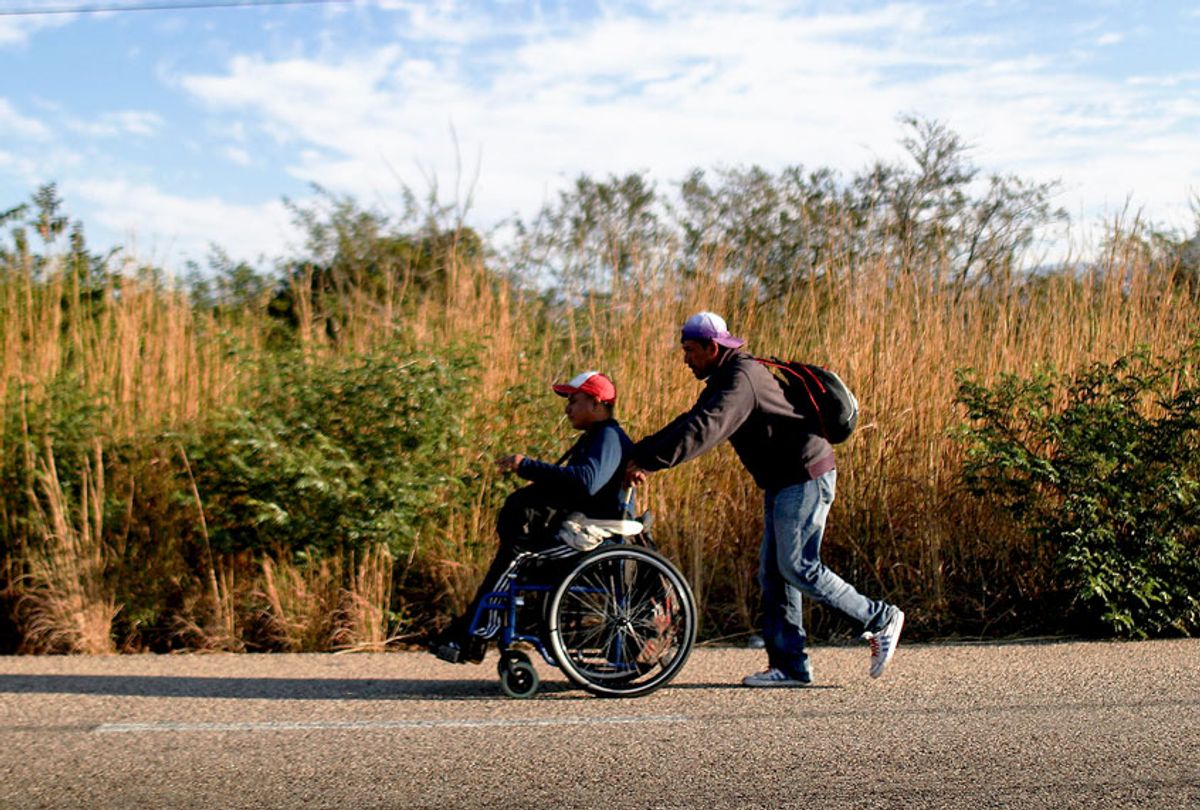 It is possible to hurt a person without ever meeting them. Donald Trump and his regime have done that millions of times in the almost three years he has been president of the United States.

Cruelty, especially against nonwhite people, is one of the Trump regime’s guiding principles. Trump, his supporters, and enablers take great pleasure in hurting the weak, the sick and any other people they deem vulnerable. This is a function of "social dominance behavior," a trait that is common to conservative-authoritarian personalities.

As I explained in an 2017 essay here at Salon, Republicans and conservatives widely believe

... that those who seek assistance from society have no right to receive it. If people do not have the resources to provide adequate health for themselves and their families, that's their own fault. Most important, the sick deserve their illnesses; the healthy and strong have earned their advantages.

Once again, the repeated efforts by the Republican Party to repeal the minimal protections offered by the Affordable Care Act serve to remind us that conservatism is a type of socially-motivated cognition that minimizes any sense of human obligation and connection to other people, outside a narrowly defined kin or other peer group.

Today's version of American conservatism is also a celebration of selfishness — and a belief that true freedom and liberty are based on a perverse individualism with little sense of common decency or linked fate with someone's fellow citizens. Today's American conservatism also embraces an extreme form of neoliberalism whereby human worth and dignity are determined by profit-and-loss statements, and capitalism and democracy are confused with one another. Ultimately, American conservatism is a value system that is antisocial, anti-democratic and anti-freedom.

In keeping with those values, the Trump administration recently proposed deporting critically ill immigrants who are receiving medical care in the United States.

Earlier this week the New York Times reported that on Aug. 7:

... the United States Citizenship and Immigration Services, without public notice, eliminated a 'deferred action' program that had allowed immigrants to avoid deportation while they or their relatives were undergoing lifesaving medical treatment. The agency, part of the Department of Homeland Security, had sent letters informing those who had asked for a renewal, which the immigrants must make every two years, that it was no longer entertaining such requests. The letters said that the immigrants must leave the country within 33 days, or face deportation.

Because of public outrage at the wanton cruelty of sending sick people — including many children — back to their home countries to die, USCIS announced a temporary pause in the deportations:

On Monday, the agency said in a statement that while limiting the program was “appropriate,” officials would “complete the caseload that was pending on August 7.” The statement said that deportation proceedings had not been initiated against anyone who had received the letter. However, it did not say whether it would continue to grant immigrants extensions to stay in the country or whether the program would be continued after current applications are processed. When asked for clarification, an agency official said the agency “is taking immediate corrective action to reopen previously pending cases for consideration.”

This should be no comfort for the people who are in the United States under the "deferred action" program. Moreover, the safe and reasonable assumption should be that the Trump regime will resume its efforts to deport immigrants receiving lifesaving medical care once the controversy and resulting public and media attention subsides. This is part of the Trump regime's fascist strategy of creating controversy through its "shocking" and "surprising" assaults on democracy, the rule of law and human decency. Predictably, the public and news media react to the outrage of the day, week or month. In response, the administration then appears to back down.

Testing the limits of societal norms is one of the primary ways through which fascists and other authoritarians break a democracy and in so doing train the public into a state of constant distraction, exhaustion and learned helplessness.

As with banning Muslims from entering the United States, building a wall along the U.S.-Mexico border, and intentionally breaking up the families of migrants, refugees and immigrants before interning them in concentration camps, the Trump administration will likely find another way to advance its original goals at a later date.

The Trump regime's efforts to punish the sick and the dying because they happen to be immigrants reflects a broader problem: Donald Trump and his policies are literally making the American people sick. Mental health professionals and other researchers have shown that the Age of Trump is a public health crisis characterized by high rates of anxiety, sleep disorders, stress and a generalized sense of fear and worry, as well as the other negative health outcomes (heart attacks and strokes; an increase in interpersonal violence such as mass shootings) that accompany such a diminished state of well-being.

These effects are most pronounced among those groups such as Hispanics and Latinos (and nonwhite people in general) who have been specifically targeted by Donald Trump and his campaign of cruelty and other vile behavior.

In total, the Trump regime has taken the pain and other harms caused by institutional racism and racial battle fatigue in America and — instead of working to heal such problems — has actively made them worse, weaponizing the suffering of nonwhite people as fuel for a racist political project.

The Trump regime's sadism has also impacted the American people as a whole. In July of this year the Washington Post reported that "a Gallup poll recently documented an increase of stress, anger and worry among all Americans, which match or top the highest levels since it began tracking these negative feelings in 2006. Those who disapprove of Trump’s performance were significantly more likely to experience each of those negative emotions, the survey found."

Donald Trump’s cruelty is a political opportunity that the Democrats would be wise to exploit in the 2020 presidential contest. Public opinion polls indicate that many Americans — including key demographics such as suburban white women — are becoming increasingly tired of Trump's nativism and racism. Contrary to what the New York Times' Thomas Edsall and others have suggested, the Democrats should emphasize Donald Trump and his regime’s cruelty by making the 2020 election a litmus test for both the character of the nation and the American people.

To most effectively turn Trump's cruelty into a tool for defeating him, the Democrats should run campaign ads featuring the families and children who are being hurt by the government's efforts to take medical care away from immigrants with life-threatening illnesses. They should also feature personal stories and profiles of Americans who will likely die if Trump and the Republicans finally succeed in killing the Affordable Care Act. Democrats and their allies should also show the children of migrants and refugees in Trump's concentration camps, along with testimonials from civil rights attorneys (and former ICE and Border Patrol enforcers) about the inhumane conditions in those facilities.

Donald Trump's image should be superimposed over the images of the horrors he and his minions are creating in America and around the world. Trump's words should be used as a soundtrack for that suffering.

As shown in a much-discussed Washington Post profile, Stephen Miller, Trump’s senior adviser — an apparent white supremacist — wants the world to see images of nonwhite babies and children being torn away from their families at the U.S.-Mexico border and then put in concentration camps. Miller believes such images would serve as a "deterrent" for migrants and refugees from Latin and South America, scaring them into not coming to the United States. Democrats should grant Miller's wish by featuring him and other members of Trump's inner circle in campaign ads that explain direct personal physical and emotional harm they are causing real human beings.

Of course, Trump’s supporters will not be shamed by seeing the human cost of their Great Leader’s actions. In fact, Trump's supporters likely enjoy seeing black and brown people suffer. For that and many other reasons the Democrats cannot base their 2020 presidential campaign strategy on winning back Donald Trump's "white working-class" voters. Many of the latter are now lost to Trump's political cult, fully addicted to what anti-racism activist and author Tim Wise accurately describes as the president's political opioid of white rage and white supremacy.

By highlighting in a direct and personal way how Donald Trump’s policies are hurting real people the Democrats can rally their own voters. They must make the 2020 election not just an exercise in the practical politics of deposing a fascist authoritarian, but also a great moral crusade.

This narrative will also force undecided voters, swing voters and others who are souring on Trump to make a decision about their personal values and about what kind of human beings they want to be. Do they support Trump and his regime's evil, and by implication share in that guilt and moral rot? Or do these people want to take a moral stand at last against the Trump regime and in doing so validate their own deeply held belief that they, unlike Trump and his supporters, are inherently good people?

Whoever the Democrats nominate to run in 2020, the party faces a great task. It must force a moral reckoning in America in order to defeat Donald Trump.