“There has to be a point where you say, ‘What am I going to believe?’" Joy Behar said of the abuse allegations 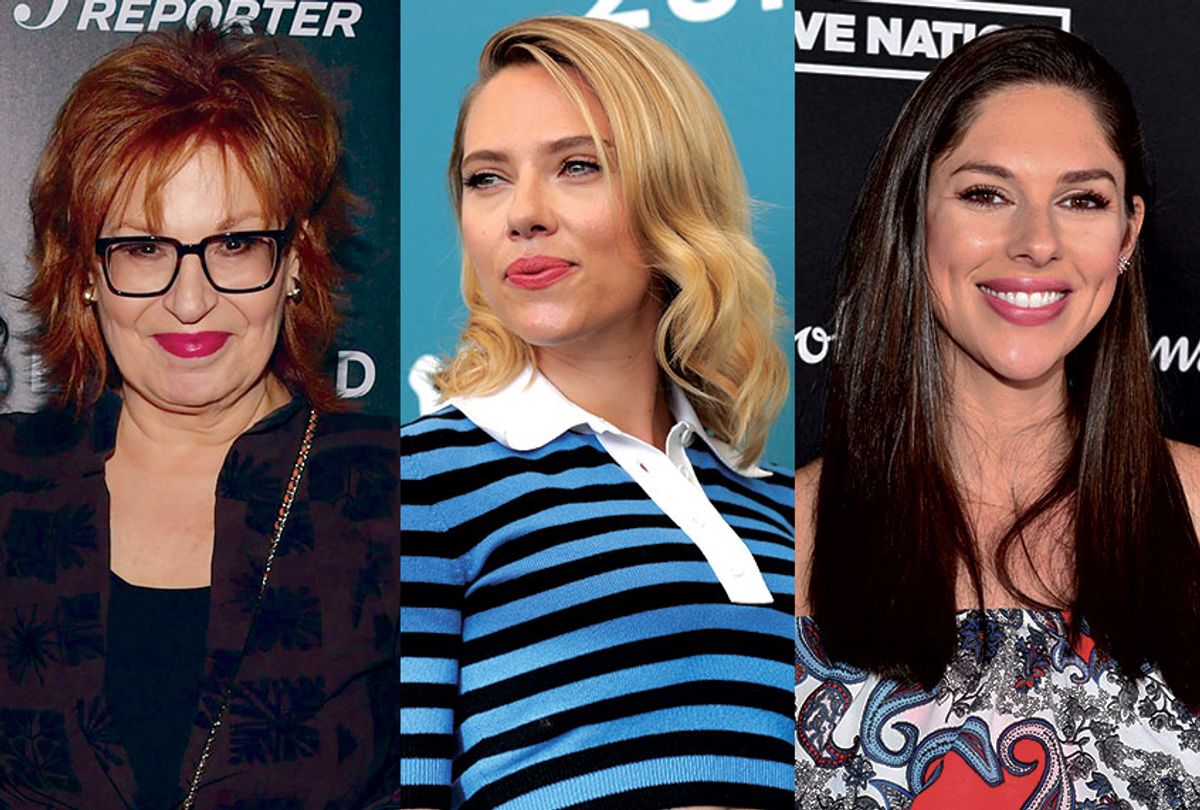 Actress Scarlett Johansson defended Woody Allen against the long-public sexual abuse allegations against him made by his daughter, Dylan Farrow, in a new profile published Wednesday in the Hollywood Reporter. While other actors who have worked with the director — including Michael Caine, Timothée Chalamet and Greta Gerwig — have distanced themselves from Allen in light of the #MeToo Movement, Johansson asserted her belief in the filmmaker’s innocence

“I love Woody,” Johansson told reporter Rebecca Keegan. “I believe him, and I would work with him anytime.”

“I see Woody whenever I can, and I have had a lot of conversations with him about it. I have been very direct with him, and he's very direct with me,” the actress continued. “He maintains his innocence, and I believe him.”

It is not surprising that Johansson does not see her support of Allen at odds with her recent work with Time’s Up, a movement encompassing more than 1,000 women in entertainment to foster accountability for and combat sexual misconduct in the workplace. At this point, Johansson’s inconsistent public actions and statements are a well-established pattern, most recently highlighted by her contradictory comments about “political correctness” in casting.

Also not surprising is that Johansson’s defense of Allen served as a “hot topic” discussion Thursday on the daytime television show “The View," during which the hosts expressed wildly different perspectives on the topic — the most outspoken being Joy Behar in her support of the filmmaker, with whom she has worked in the past.

“This situation is one of those things that’s out there constantly,” Behar said. “When somebody is accused of such a heinous crime as child molestation, you say to yourself, ‘What do I believe?'”

“There is evidence,” she continued. “The Connecticut State Police brought in an investigative team from the Yale New Haven Hospital. Their six month-long inquiry, which included medical examinations, concluded that Dylan had not been molested.”

Behar went on to say that while she was not defending “Woody’s behavior with Soon-Yi,” Mia Farrow’s adopted daughter and Allen’s wife of 22 years, she did believe Allen’s innocence regarding any allegations of molestation.

“There has to be a point where you say, ‘What am I going to believe?’ The authorities who investigated this? Or people who are making accusations?” Behar asked.

Co-host Sunny Hostin, who during her career as a lawyer was granted a special achievement award from Attorney General Janet Reno for her successful prosecution of sex offenders, immediately pushed back on Behar’s remarks. Hostin said that sexual predators often groom their character witnesses just as carefully as their eventual victims.

“There were experts that also found — a judge, in particular, found that she [Dylan Farrow] had to be protected against his advances towards her,” Hostin said. “So there are other people on the other side of it.”

Hostin was referring to a 1993 ruling in which Justice Elliott Wilk stated, “Mr. Allen’s behavior toward Dylan was grossly inappropriate, and . . . measures must be taken to protect her.”

At that point, co-host Abby Huntsman declared that the #MeToo Movement had gone too far, as she feels that facts and due process have been disregarded.

Behar then concluded the segment by saying that the answer in this particular case had been decided long ago.

“The only people you trust are the experts on the situation, which is the Yale New Haven Hospital,” Behar said.