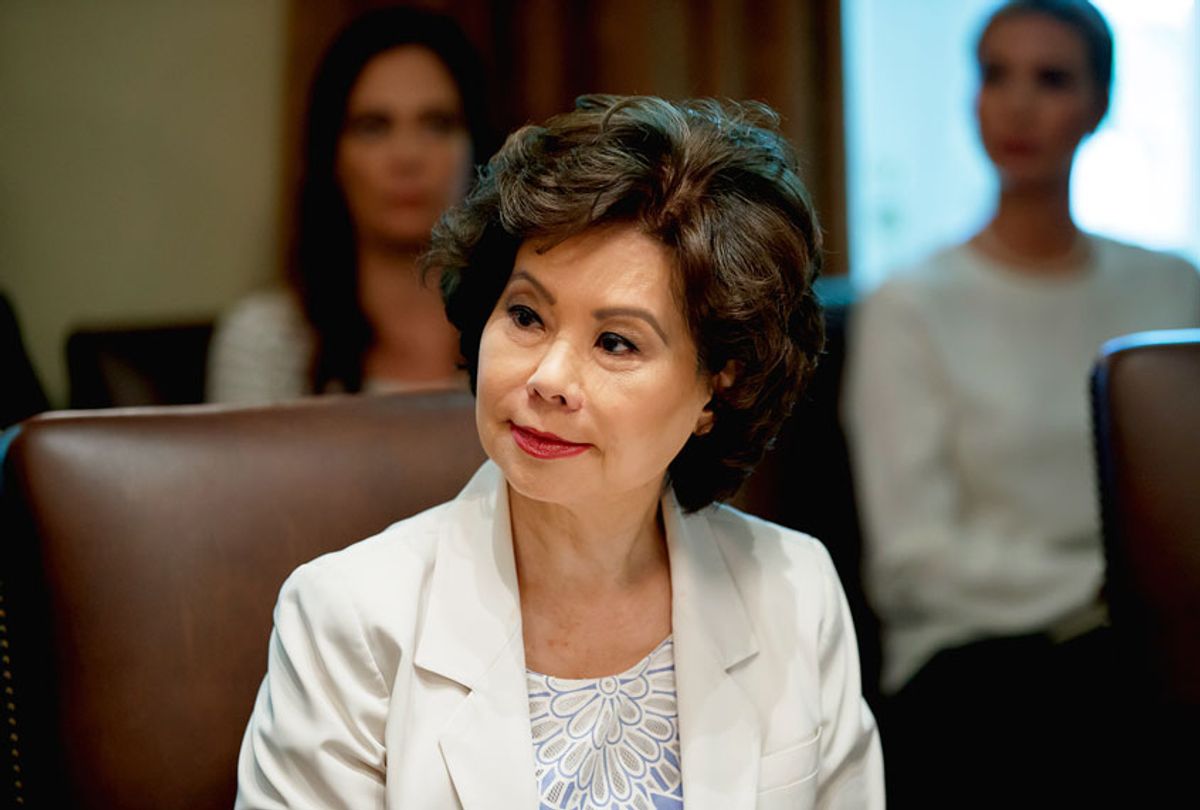 Elaine Chao, who serves as President Donald Trump's transportation secretary and is married to Senate Majority Leader Mitch McConnell, is being investigated by House Democrats over accusations of conflicts of interest involving her family's shipping company.

"Several reports indicate that you have used your official position to benefit Foremost Group, a shipping company owned by your father and sisters that is headquartered in New York and operates a fleet that transports materials to and from China," House Oversight Committee Chairman Elijah Cummings wrote in a letter to Chao that was co-signed by Economic and Consumer Policy Subcommittee Chairman Raja Krishnamoorthi. "These reports suggest that you used your official position to elevate Foremost Group's influence and status with the Chinese government, which has extended hundreds of millions of dollars in low-interest loans to the company for the purchase of foreign-flagged ships."

The letter also pointed out that Chao had appeared with her father, who founded the Foremost Group, in Chinese media interviews, many of which included her seal as secretary of Transportation. Cummings and Krishnamoorthi also described how an official trip to China in 2017 was cancelled after Chao attempted to include her family members in meetings with the Chinese government and how policies implemented by Chao have harmed U.S.-flagged vessels in favor of foreign-flagged vessels owned by her family's company.

The congressmen also detailed Chao's promise to divest herself from a construction-materials company called Vulcan Materials, which she never followed through on. When that story came to light in May, Walter Shaub, who headed the Office of Government Ethics until July 2017, told The Wall Street Journal that "if you look at her ethics agreement, it provides for a complete disentanglement of her interest from Vulcan Materials, and that’s what was represented to the Senate. For the head of the DOT to have a financial interest in an asphalt company — that is not sending a message to employees of DOT that she is making ethics a priority."

"Secretary Elaine Chao’s potential conflicts of interest that the House Democrats’ letter targets are extremely serious, especially given Chao’s proximity to the center of Republican legislative power and Senate confirmation power in her husband, Majority Leader Mitch McConnell," Tribe told Salon by email. "That said, I wouldn’t hold my breath waiting for anything significant to happen as a result of those deep conflicts. The swamp that defines this entire administration will not be drained while the president himself is the corrupter-in-chief and is essentially on the take from foreign powers in violation of the Foreign Emoluments Clause of Article I and continues to rob America’s taxpayers in violation of the Domestic Emoluments Clause of Article II. As the old saw has it, the fish rots from the head."

Delaney Marsco, the legal counsel for ethics at the Campaign Legal Center, told Salon by email that "given the information we have about Secretary Chao's close ties to her family's business, which can benefit from her work as Transportation secretary, and her failure to divest from Vulcan, there are serious questions about potential conflicts that need answered. An investigation seems warranted here."

Aaron Rodriguez, press secretary for Citizens for Responsibility and Ethics in Washington, told Salon by email that "we are glad that the House Oversight and Reform Committee will be looking into Secretary Chao's apparent conflicts of interest and ethics violations. It seems pretty straight forward to understand that public officials cannot use their position for private gain for themselves or their families. Unfortunately, due to chronic ethics abuses across the Trump Administration, we cannot give Chao the benefit of the doubt here."

In a statement to the New York Times, the Department of Transportation said that "we look forward to responding to the committee’s request. Media attacks targeting the secretary’s family are stale and only attempt to undermine her long career of public service."

The department further claimed that Chao's failure to sell the Vulcan stock was an innocent oversight and that her eventual decision to divest "demonstrates her commitment to going above and beyond what is required in terms of compliance."

Before being tapped as Trump's transportation secretary, Chao was best-known for serving as a Cabinet official under former President George W. Bush, then as secretary of labor. She is both the first Chinese American and the first Asian American woman to hold a position in a presidential Cabinet, which has caused her to be targeted by racist attacks from individuals like West Virginia Republican Don Blankenship, who in 2018 said called her a "wealthy Chinaperson" and asserted "there’s a lot of connections to some of the brass, if you will, in China."