“In my four decades of public service, my integrity has never been questioned until now," Maguire told Congress 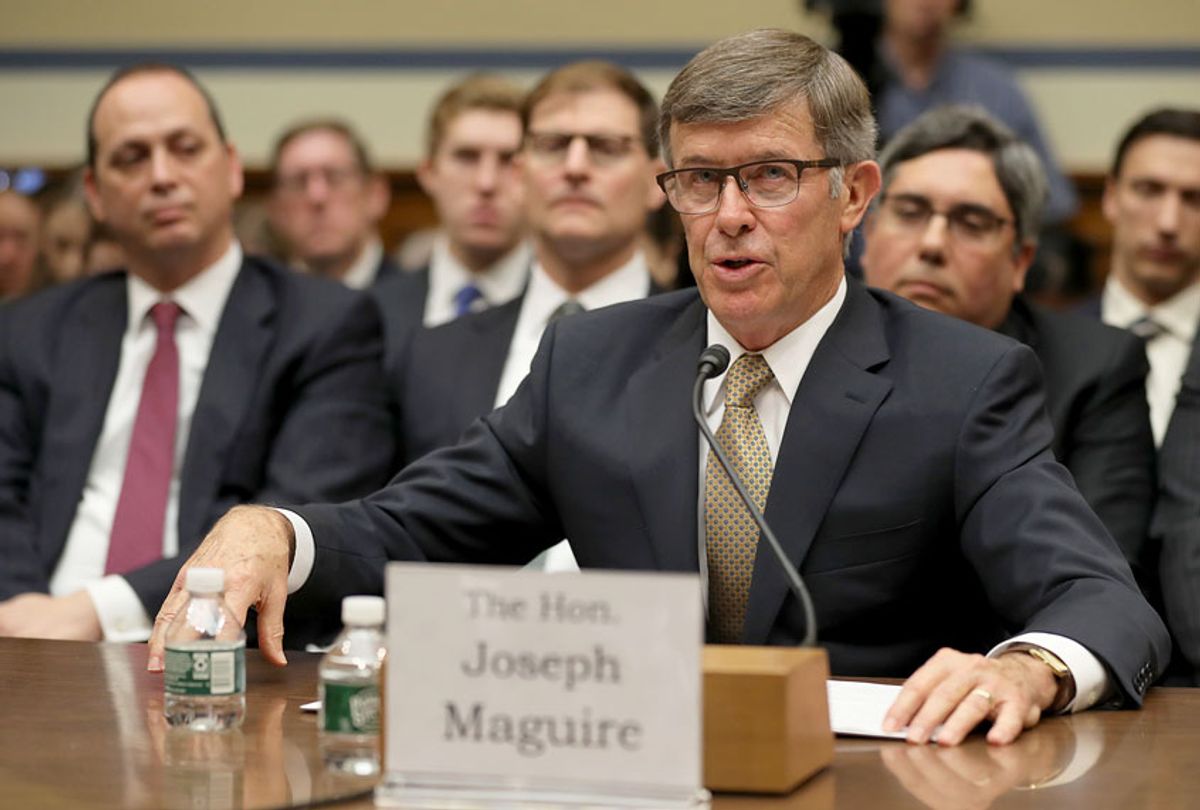 Joseph Maguire, the acting director of national intelligence, told members of the House Intelligence Committee that he was neither "partisan" or "political" Tuesday as he fielded questions about why he did not turn over a whistleblower complaint to Congress in the timeframe set forth by the law.

“In my four decades of public service, my integrity has never been questioned until now," Maguire said.

Released with redactions prior to the hearing, the whistleblower's complaint alleged that President Donald Trump solicited Ukraine to interfere in the 2020 presidential election. It also accused the White House of attempting to cover up those efforts. Maguire acknowledged that the allegations were "unique and unprecedented."

“It would be funny if it wasn't such a graphic betrayal of the president's oath of office,” Chairman Adam Schiff, D-Calif., said at the beginning of the hearing.

The chairman added that it was “bewildering” that Maguire did not go directly to the committee with the whistleblower’s complaint.

“We were immediately struck by the fact that many of the allegations in the complaint are based on a conversation between the president and another foreign leader," Maguire told Schiff. "Such calls are typically protected by executive privilege.”

Thought the hearing, Maguire continued to assert that he was “not authorized, as the director of national intelligence, to provide executive privileged information” and needed first to determine whether the White House regarded the information as such.

Schiff expressed dissatisfaction with this answer, calling attention to the fact that Maguire "went to the subject of the complaint about whether you should provide the complaint to Congress.”

By contrast, Ranking Member Devin Nunes, R-Calif., said that the Democratic Party's handling of the controversy was similar to the “Russia collusion hoax" and was motivated by a desire to undo the results of the 2016 presidential election.

Nunes also echoed the Trump administration’s attempts to make Biden the focus of the scandal, claiming that he "bragged that he pressured the Ukrainians into firing a prosecutor who happened to be investigating the vice president's own son.” (No proof of this claim exists.)

When Nunes asked Maguire if he had "investigated the veracity or the truthfulness of this complaint," the intelligence chief acknowledged he had not. However, Maguire asserted that the individual, whose name he claimed not to know, acted in "good faith."

"First, I want to stress I believe the whistle-blower and the inspector general have acted in good faith throughout," he said. "I have every reason to believe that they have done everything by the book and followed the law."

When asked by Rep. Terri Sewell, D-Ala., if he agreed the way the complaint was handled could have a “chilling effect” on future whistleblowers, Maguire affirmed that “I think that's a fair assessment. I don't disagree with what you've said.”

He later confirmed to Rep. Andre Carson, D-Ind., that “this is the first time that an intelligence community whistleblower complaint has been withheld from Congress. It's unprecedented.”

At the close of the hearing, Schiff told CNN his committee would work through Congress' upcoming recess to further probe the whistleblower's claims.

“It’s hard to imagine a more serious set of allegations than those contained in the complaint,” Schiff said. “At the end of the day, what is alleged in this whistleblower complaint goes to the very heart of the president’s oath of office."