"Beyond repugnant": Cracks in GOP begin to show as Trump suggests "civil war" over impeachment 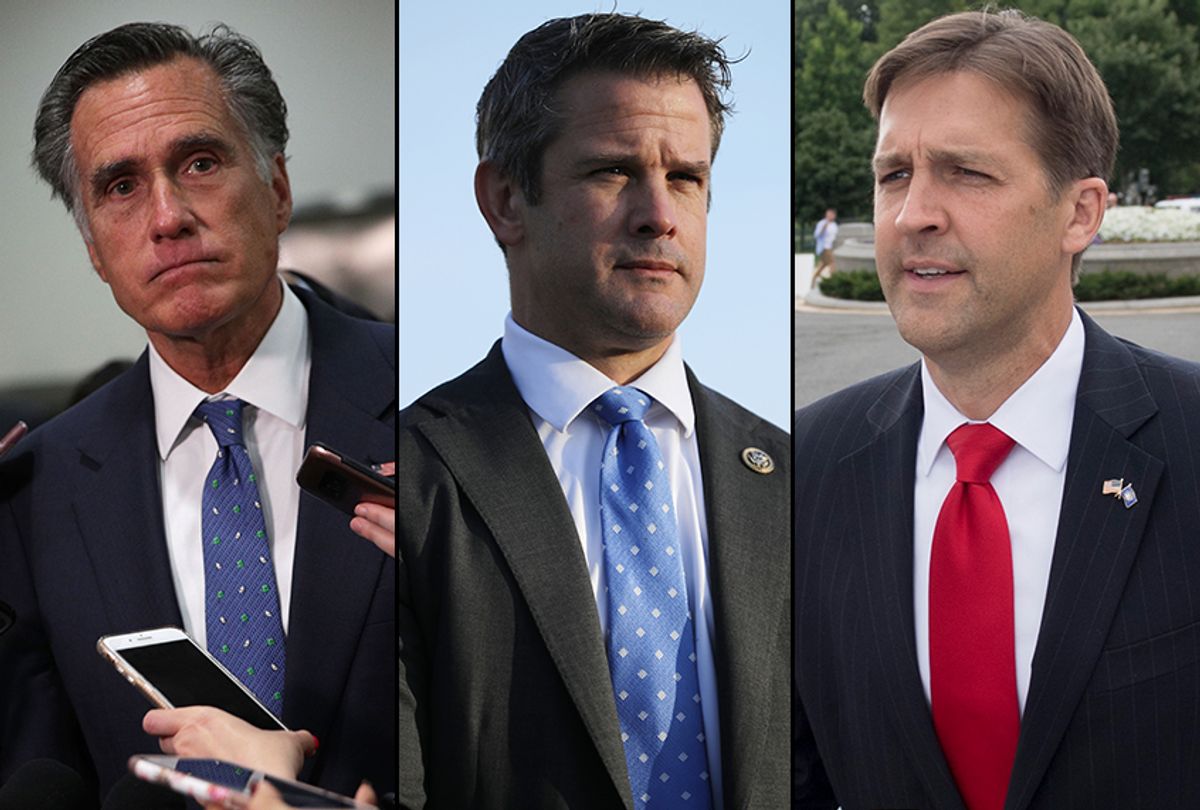 President Trump lashed out at Democrats over the weekend over the House of Representatives’ impeachment inquiry, which came as no surprise. This time, not all Republicans are standing behind him.

Trump spent much of his weekend lashing out at the revelations in a whistleblower complaint, apparently filed by a CIA officer, that accused him of pressing Ukraine to investigate former Vice President Joe Biden and help discredit the Russia probe. Trump insisted that the complaint misrepresented his call with Ukrainian President Volodymyr Zelensky, even though a partial transcript of the call released by the White House confirmed the whistleblower’s account.

On Sunday, Trump demanded to “meet” the anonymous whistleblower, whose attorney has expressed “serious concerns” over his personal safety.

“Like every American, I deserve to meet my accuser, especially when this accuser, the so-called ‘Whistleblower,’ represented a perfect conversation with a foreign leader in a totally inaccurate and fraudulent way,” Trump wrote, even though the Trump-appointed acting director of national intelligence and the intelligence community’s inspector general found the complaint to be “credible” and had submitted criminal referrals over Trump’s call to the Justice Department before the White House essentially confirmed the whistleblower’s allegations by releasing the transcript.

Trump went on to suggest that the others in the intelligence community were “spying on the US president” and warned of “big consequences.”

Trump later quoted Pastor Robert Jeffress, a member of Trump’s Evangelical Advisory Board, who warned of a “civil war” if Democrats impeach and successfully remove the president.

“The Democrats don’t care if they burn down and destroy this nation in the process. I have never seen the Evangelical Christians more angry over any issue than this attempt to illegitimately remove this President from office, overturn the 2016 Election, and negate the votes of millions of Evangelicals in the process,” Trump quoted. “If the Democrats are successful in removing the President from office (which they will never be), it will cause a Civil War like fracture in this Nation from which our Country will never heal.”

The final tweet drew a harsh rebuke from Rep. Adam Kinzinger of Illinois, an Iraq and Afghanistan veteran who represents a solidly Republican district.

“I have visited nations ravaged by civil war,” he wrote. “I have never imagined such a quote to be repeated by a President. This is beyond repugnant.”

Kinzinger’s condemnation was a rare moment of Republican pushback against Trump, though not the first since the Ukraine scandal imperiled Trump’s first term.

Gov. Phil Scott of Vermont and Gov. Charlie Baker of Massachusetts, Republican chief executives of largely Democratic states, have both come out in support of the Democrats’ impeachment inquiry. Rep. Mark Amodei of Nevada last week became the first House Republican to back the investigation into Trump’s conduct, although he has since said he does not support impeachment. No Republican senators have backed the inquiry so far, but both Sen. Mitt Romney of Utah and Sen. Ben Sasse of Nebraska have called the transcript and whistleblower revelations “troubling.”

The comments underscore the difficult position Republican lawmakers find themselves in. While hundreds of national security experts have called Trump’s conduct on Ukraine impeachable, roughly 90 percent of Republican voters approve of the job he is doing, according to Gallup.

Former Arizona Sen. Jeff Flake, a Republican who retired amid his criticism of Trump rather than face a pro-Trump primary challenger, said last week that the majority of Republicans would vote to remove the president if their votes weren’t made public.

"I heard someone say if there were a private vote [on impeachment in the Senate] there would be 30 Republican votes,” he said at the Texas Tribune Festival. “That's not true. There would be at least 35."

Still, Republican support for Trump may be softening since the impeachment push began.

Flake wrote an op-ed for the Washington Post on Monday, urging his former Republican colleagues to consider the evidence showing that Trump “has abused the power of his office to pressure a foreign government to go after a political opponent” and, even if they oppose impeachment, to oppose his re-election.

“I am not oblivious to the consequences that might accompany that decision. In fact, I am living those consequences. I would have preferred to represent the citizens of Arizona for another term in the Senate. But not at the cost of supporting this man. A man who has, now more than ever, proved to be so manifestly undeserving of the highest office that we have,” he wrote. “Trust me when I say that you can go elsewhere for a job. But you cannot go elsewhere for a soul.”