With "Bob Hearts Abishola" and "Sunnyside," sitcoms are showcasing the immigrant's story

Immigrants have been in sitcoms since TV's early days, but new shows centralize the experience of coming to America 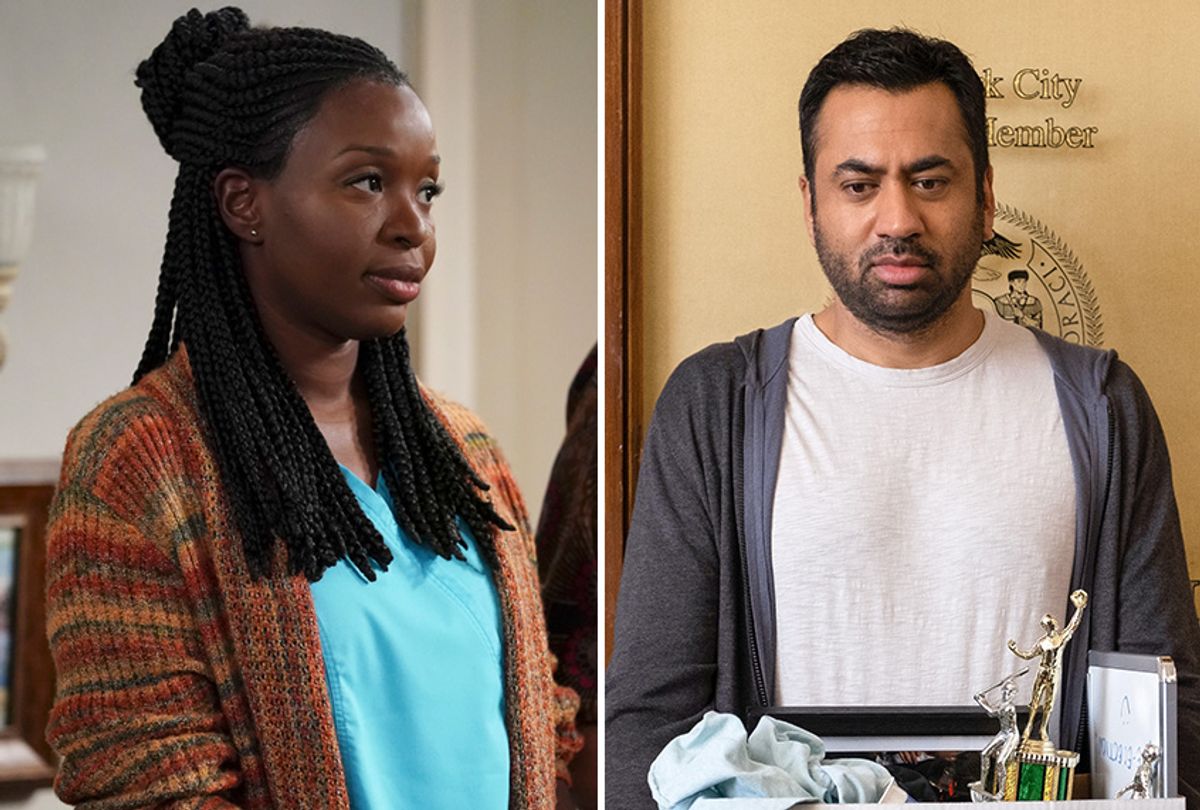 In the view of producer Chuck Lorre, the most important narrative on television elevates the greatness of America’s immigrants.  His means of doing so, “Bob Hearts Abishola,” might raise a few eyebrows and questions, strictly on the face of it.

Lorre’s new CBS comedy is a love story, you see— one that involves a well-meaning, lonely sock salesman pursuing a relationship a hard-working woman who is uninterested in him. This is an ages-old romantic comedy set-up that could very well have shaped up to be a lighthearted yarn about a stalker. It’s not that, fortunately.

What seems to be making a few people balk at the show, is that Bob is a standard-issue Michigan white guy played by Billy Gardell, who wakes up in the hospital after a heart attack to the sight of Abishola, a Nigerian nurse played by Folake Olowofoyeku.

Bob isn’t immediately smitten, but when she sings a lullaby to him in her native Yoruban language, a switch flips and suddenly he’s gifting her with bags of compression socks. Her family is confused, as is Bob’s. Soon enough, though, the though of Bob and Abishola getting together becomes all that anyone can talk about.

However, rooting for their “extreme opposites attract” love affair is not the primary reason Lorre co-created “Bob Hearts Abishola” with British comedian Gina Yashere. What he wants to highlight is how hard these foreign-born men and women who come to this country work once they get here, and how much they add to the fabric of American culture.

“People come to this country and work their asses off to make a life for themselves and their family,” he told critics and industry reporters at a CBS press event in August. “That’s a story worth telling.”

Lorre’s sentiment is timely, although the political environment would seem to be a tough one for “Bob Hearts Abishola,” airing Mondays at 8:30 p.m. on CBS, or  NBC’s“Sunnyside,”  another immigrant-centric comedy co-created by Kal Penn, to crack into. Anti-immigrant sentiment is at the highest it has been in modern times, with racial animus between whites and people of color ranking not too far behind it.

In the same week that both series premiered, the Trump administration slashed the number of refugees the United States would accept over the next 12 months to 18,000, substantially lower than the current limit of 30,000. In 2016, President Barack Obama’s final year in office, his administration proposed that the United States let in 110,000 persecuted people from war-torn parts of the world.

This, following a summer of raids by Immigration and Customs Enforcement officials and what seemed to be endless headlines about the squalid conditions in border detention facilities, when even youngest and most vulnerable migrants were denied basic hygiene necessities such as soap and toothbrushes.

With “Bob Hearts Abishola,” Lorre says he hopes to take some of the anger out of the conversation about immigration and migrants seeking a path to American citizenship.

“I don't understand the anger. I really don't,” Lorre told Salon in a brief interview conducted in August. “A cursory look at American history says that's what we're all about, is immigration. It really is. Just a brief glance at history says that's exactly the greatness of this country: the melting pot. So if we bring a little bit of laughter to that conversation, that would make this worthwhile.”

Penn echoed this sentiment in a separate interview about “Sunnyside,” airing new episodes Thursdays at 9:30 p.m. on NBC. “The idea of immigration is the idea of America. It's not a thing that is happening only in the last couple of years. It was happening in the five years since I had the initial idea for this show. It was happening the hundreds of years before,” Penn said. “And comedy is the great unifier. Especially since we are living in kind of polarizing times, it's nice to have a show that we hope appeals to everyone in that unifying way.”

As much as Penn and his co-creator Matt Murray, an alumnus of “The Good Place,” desire to centralize the stories of its immigrant characters and their lives, they’re also cognizant that the viewer doesn’t necessarily want to get bogged down in minutiae about the labyrinthine process to attaining citizenship. Similarly Lorre promises that the writers will take their time developing the romance between Bob and Abishola, focusing first on Abishola’s family dynamics and culture and what it means to entertain the possibility of bringing a milquetoast white guy into their orbit.

“Bob Hearts Abishola” is the first American comedy airing on a major network to featuring a Nigerian character and her story as a co-lead alongside Gardell, a stand-up comic who co-starred alongside Melissa McCarthy in Lorre’s sitcom “Mike & Molly.” But it is far from the first to feature characters born in other countries who are not naturalized citizens, or might be undocumented.

The history of television includes many immigrant stories, dating as far back to Desi Arnaz’s Ricky Ricardo on “I Love Lucy.” In most cases, though, these characters are so blended into the lives and plots of the white Americans surrounding them that we somehow divorce them from any negative narratives surrounding immigrants and immigration. In the short-lived "I Married Dora," Elizabeth Peña's undocumented domestic from El Salvador married her employer to stay in the country, but a central part of the initial premise rests in the marriage being agreed to under false pretenses.

Characters such as Andy Kaufman’s Latka Gravas on “Taxi” or Bronson Pinchot’s Balki Bartokomous on “Perfect Strangers,” are othered to the point of being harmless comic relief. The Soup Nazi on “Seinfeld”? Definitely not born in Yonkers. Also, hilariously mercurial!

Closer to the current era, however, are the likes of Gloria Delgado Pritchett on “Modern Family,” whose history of being deported twice is breezily written into humorous dialogue and not substantially dwelt upon. And Lorre himself is no stranger to featuring immigrants in his series, the best known being Raj Koothrappali from “The Big Bang Theory,” who only briefly faces deportation when his research project concludes, only to have his friend Sheldon Cooper come to his rescue by hiring him to assist in his work.

On “Young Sheldon,” it is revealed that his best boyhood friend is Tam Nguyen, who immigrated with his family to escape a war-torn Vietnam. But then, the “Big Bang” spinoff is a period piece, a reminder that the late 1980s and early 1990s were very different times.

Today’s visions of detention and deportation play a central role in the final season of Netflix’s “Orange Is the New Black,” which debuted this past summer. “One Day at a Time” and “Fresh Off the Boat” each tackled the immigration and naturalization processes for major characters, with each resolving satisfactorily if not necessarily smoothly.

“Superstore,” in contrast, makes the detention of its beloved character Mateo (Nico Santos) an important focus of its fifth season plotline. In a season premiere featuring the usual workplace comedy shenanigans at Cloud 9, when two characters visit him, the writers do not gloss over the horrible hardship he faces at the ICE facility where he’s being held.

Such narratives help define the stakes simmering underneath the breezy “Sunnyside” A-plot featuring Penn as disgraced politician Garrett Modi, himself the son of immigrants. A drunken caught-on-video moment ends his career, but it also eventually leads him to a group of people desperate to get on the path to citizenship and stay a few steps ahead of deportation.

Penn, as if we need to be reminded, became wildly famous after co-starring in “Harold and Kumar Go to White Castle” and its sequels, a series of stoner buddy-comedy flicks that have the distinction of also being stories about first-generation immigrants. He went on to co-star in the long-running Fox drama “House” and to work in the Obama administration, but his association with that film franchise and what it represents helps to sell “Sunnyside,” which he smartly describes as  “a patriotic comedy.”

Hence, Garrett’s makeshift citizenship class is comprised of people whose stories should feel very familiar to viewers. There’s Hakim (Samba Schutte) a former cardiothoracic surgeon from Ethiopia who drives a taxi to make ends meet; Brady (Moses Storm), an all-American looking kid who finds out his Moldovan parents lied about his citizenship status; Griselda (Diana Maria Riva), a Dominican woman who has an endless number of jobs; and Mei Lin (Poppy Liu) and Jun Ho (Joel Kim Booster), siblings from an unspecified country in Asian whose father might be an international supervillain.

Save for the last two, these characters exemplify aspects of the immigrant experience most Americans are familiar with. They are people doing jobs to make our lives easier who we tend to take for granted. Owing to the ongoing debate on what to do with DACA recipients, stories resembling that of Brady may be familiar to more viewers than in years past.

Regular reminders in newscasts by way of tragic deportation cases such as that of Jimmy Aldaoud, a diabetic man who was sent to Iraq after spending his whole life in Detroit only to die there when he couldn’t get the medical help he needed, we’re also not able to entirely forget what could happen to these characters.

“We all know the horror stories that those are very serious and real. But we're also trying to show that immigration is not a monolith,” Murray said of “Sunnyside.”

He points to “Will & Grace” as an influence on their comedy’s approach, citing that comedy’s role in changing the way Americans thought about queer culture in America. “If we can do something like that, then we will really have succeeded in showing the audience that, yes, these people are going through this process, but they have the same problems and issues that everyone has.”