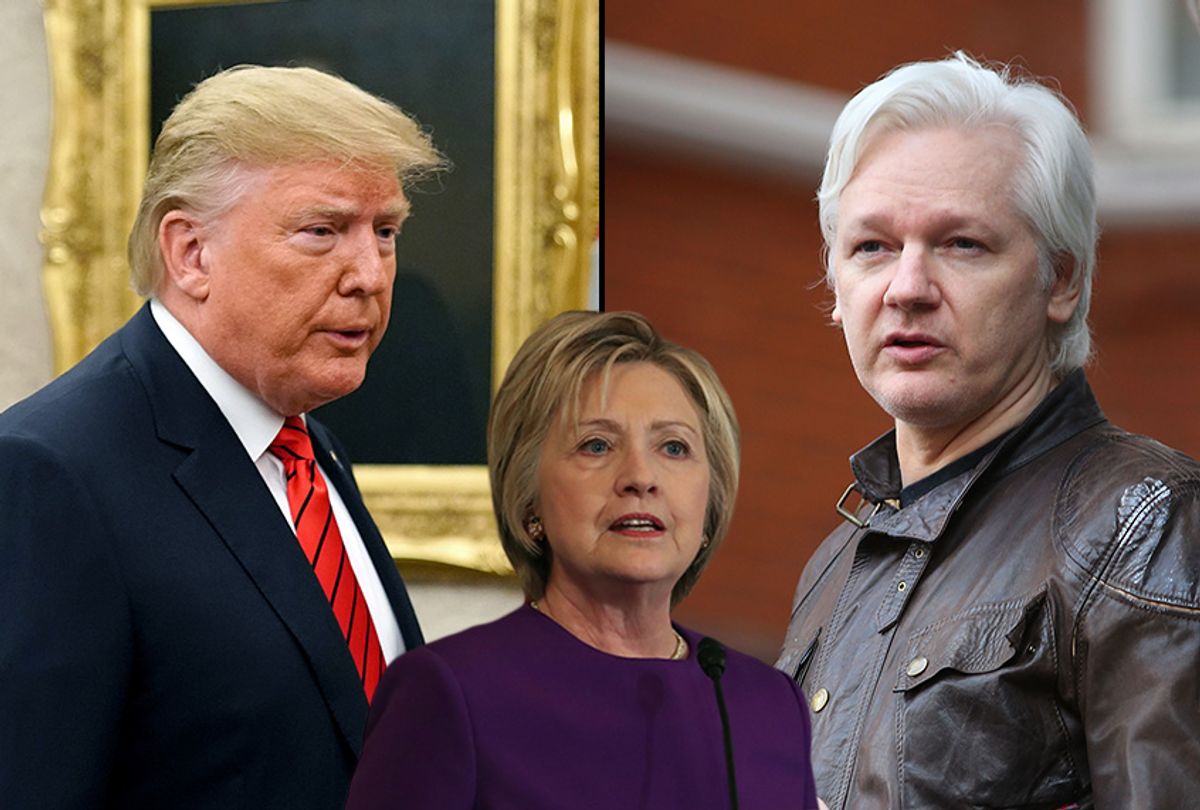 Lawyers for the House Judiciary Committee suggested that the redactions in former special counsel Bob Mueller’s report show that President Trump may have lied about his campaign’s ties to WikiLeaks, according to a court filing obtained by Politico.

The filing was submitted Monday as part of the House Judiciary Committee’s lawsuit to obtain grand jury materials in the Mueller probe.

"Not only could those materials demonstrate the president’s motives for obstructing the special counsel’s investigation, they also could reveal that Trump was aware of his campaign’s contacts with WikiLeaks," the filing said. The Mueller report revealed that WikiLeaks released thousands of emails stolen from the Democratic National Committee by Russian intelligence operatives.

The filing noted that one part of Mueller’s report cited former Trump campaign chief Paul Manafort saying he “recalled” Trump asking to be “updated” about disclosures of stolen Democratic National Committee emails, but the passage included a grand jury redaction.

“The text redacted ... and any underlying evidence to which it may point are critical to the committee’s investigation,” the attorneys said. “Those materials therefore have direct bearing on whether the president was untruthful, and further obstructed the special counsel’s investigation, when in providing written responses to the special counsel’s questions he denied being aware of any communications between his campaign and WikiLeaks.”

The filing also said that the materials could be useful to investigators probing Trump’s pressure campaign on Ukraine to investigate a debunked claim against former Vice President Joe Biden and help discredit the Mueller probe.

"Those events may also be relevant to the House’s investigation of the president’s solicitation of Ukrainian interference in the 2020 election,” the filing said.

But House lawyers hope the impeachment inquiry into Trump’s efforts to enlist Ukraine's interference in the 2020 election will help them obtain the Mueller documents they have sought for months. The Justice Department previously argued that it did not have to turn over the documents because House Speaker Nancy Pelosi had said that the investigation was not a true impeachment proceeding.

“This Court should likewise reject DOJ’s attempt to claim for itself the power to declare when an impeachment inquiry is underway in the House,” the Democrats’ new filing said. “Under the Constitution’s separation of powers, and the authority the Constitution vests in the House alone to structure its proceedings, that power is not DOJ’s for the taking. As Speaker Pelosi recently confirmed, the House is ‘moving forward with an official impeachment inquiry.’”

While the court considers the Democrats’ new filing, details about the redacted information concerning WikiLeaks could be made public in the trial of longtime Trump adviser Roger Stone, who claimed to have been in contact with the group during the 2016 campaign. Stone was indicted in January on seven counts of obstruction, lying to Congress and witness tampering. He pleaded not guilty and has walked back his claims that he communicated with WikiLeaks.

The indictment against Stone alleges that he was the campaign’s contact on matters related to WikiLeaks.

“A senior Trump campaign official was directed to contact Stone about any additional releases and what other damaging information Organization 1 had regarding the Clinton campaign,” the indictment said. "Organization 1" is known to refer to WikiLeaks.

In emails obtained by The New York Times, Stone promised then-Trump campaign chief Steve Bannon “a load” of stolen DNC emails “every week going forward” one month before the election.