Mark Zuckerberg: We will "go to the mat" to fight Elizabeth Warren if she tries to break up Facebook

"If someone’s going to try to threaten something that existential, you go to the mat — and you fight" 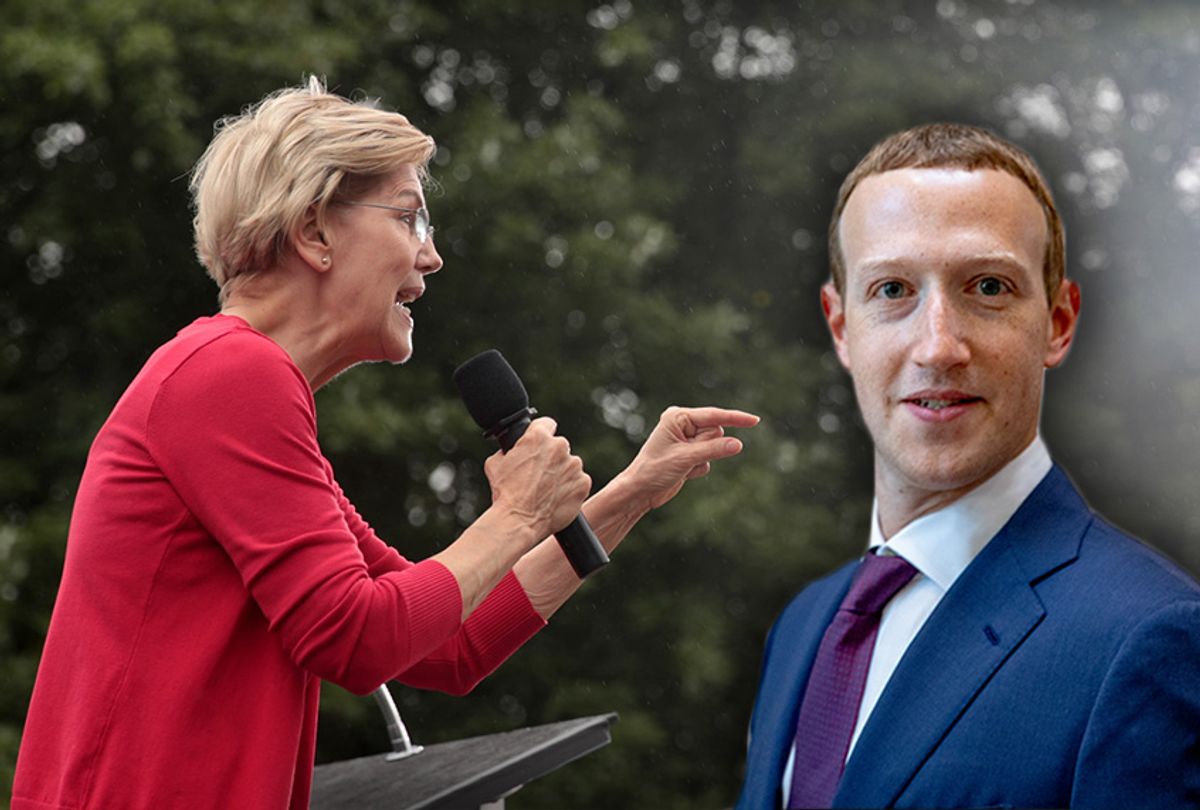 Facebook CEO Mark Zuckerberg told employees in two open meetings that he would be willing to “go to the mat” against Sen. Elizabeth Warren if the Massachusetts Democrat tries to break up Facebook after being elected president.

“You have someone like Elizabeth Warren, who thinks that the right answer is to break up the companies . . . If she gets elected president, then I would bet that we will have a legal challenge, and I would bet that we will win the legal challenge,” Zuckerberg told his employees during two hours of leaked audio published by The Verge. “And does that still suck for us? Yeah. I mean, I don’t want to have a major lawsuit against our own government . . . At the end of the day, if someone’s going to try to threaten something that existential, you go to the mat — and you fight.”

“It's just that breaking up these companies — whether it's Facebook, or Google or Amazon — is not actually going to solve the issues,” Zuckerberg said. “And, you know, it doesn't make election interference less likely. It makes it more likely, because now the companies can't coordinate and work together.”

The Facebook founder also took a swipe at Twitter, arguing in the leaked remarks that the company’s comparatively smaller business meant it would not be as effective at combating electoral interference as Facebook.

“Our investment on safety is bigger than the whole revenue of their company,” Zuckerberg said to laughter.

In her call to break up tech giants, Warren has written that “we need to stop this generation of big tech companies from throwing around their political power to shape the rules in their favor and throwing around their economic power to snuff out or buy up every potential competitor. That’s why my administration will make big, structural changes to the tech sector to promote more competition — including breaking up Amazon, Facebook and Google.”

At one point, Zuckerberg polled evenly in a hypothetical head-to-head match-up against Trump as rumors swirled about his possible White House ambitions. However, the fallout from the 2016 election has not subsided, and Facebook has courted controversy for a number of controversial business practices beyond its steps to block election interference. These include: allegations of behaving like a monopoly, allowing third parties to access users’ data, monitoring users’ web browsing after they log out and tracking people who have never registered for the service.

Warren's words were echoed by one of Zuckerberg's co-founders, Chris Hughes, who publicly called for the company to be broken up in May. In an editorial in the New York Times, Hughes called Zuckjerberg's power "unprecedented and un-American."

"[Facebook CEO Mark Zuckerberg's] influence is staggering, far beyond that of anyone else in the private sector or in government," Hughes wrote. "He controls three core communications platforms — Facebook, Instagram and WhatsApp — that billions of people use every day. Facebook’s board works more like an advisory committee than an overseer, because Mark controls around 60 percent of voting shares. Mark alone can decide how to configure Facebook’s algorithms to determine what people see in their News Feeds, what privacy settings they can use and even which messages get delivered. He sets the rules for how to distinguish violent and incendiary speech from the merely offensive, and he can choose to shut down a competitor by acquiring, blocking or copying it."

Last month, New York Attorney General Letitia James, a Democrat, revealed that she was leading a bipartisan coalition of attorneys general in a probe of Facebook over possible antitrust violations. Joined by the attorneys general of Colorado, Florida, Iowa, Nebraska, North Carolina, Ohio, Tennessee and the District of Columbia, James said that the purpose of the investigation was “to determine whether Facebook’s actions may have endangered consumer data, reduced the quality of consumers’ choices or increased the price of advertising.”