With an estimated net worth of $1.3 billion, Betsy DeVos is the wealthiest member of President Trump's Cabinet 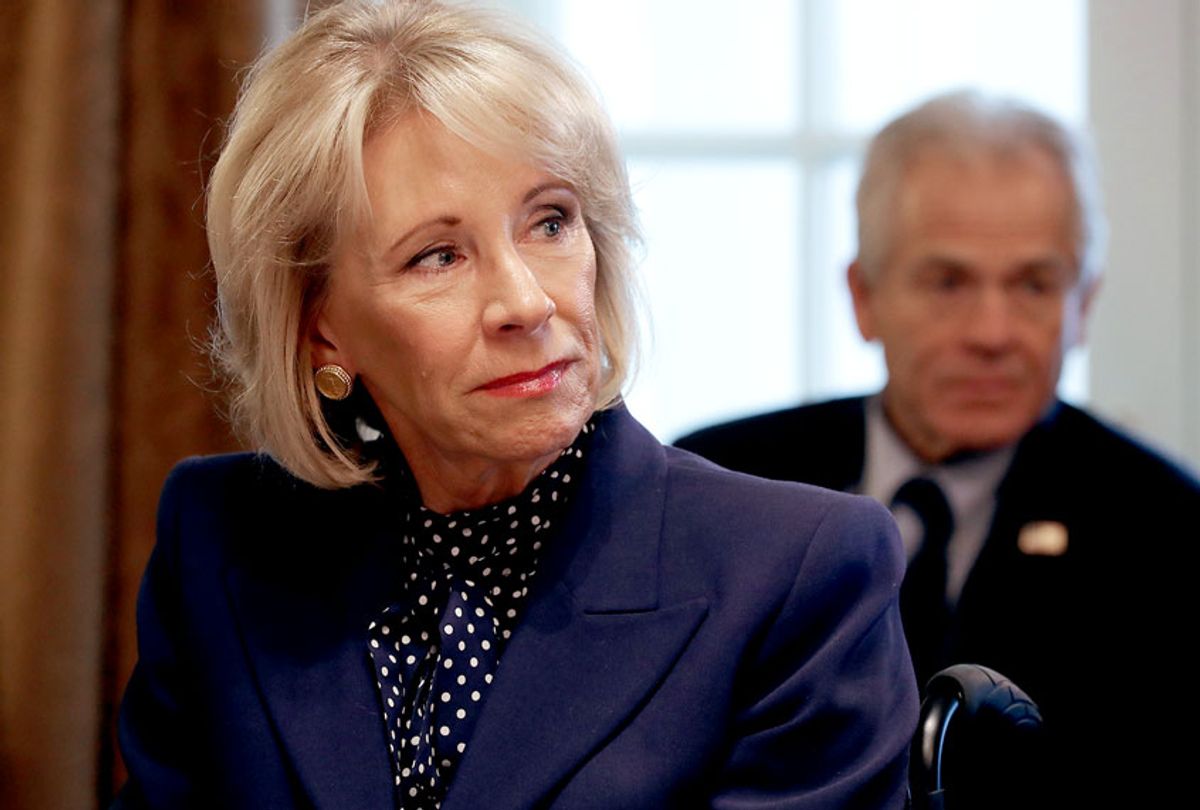 The security detail for Secretary of Education Betsy DeVos, who is the wealthiest member of President Donald Trump's Cabinet, is expected to cost American taxpayers $7.87 million between now and the end of September 2020.

That figure represents an increase from the $6.24 million spent on DeVos’ security during the 2019 fiscal year and the $6.79 million spent during the 2018 fiscal year, according to Politico. When coming up with an estimate for fiscal 2019, which ended on Monday, the agency had anticipated it would spend $7.74 million to protect the billionaire education secretary.

It is not normal protocol for an education secretary to receive such an extravagant security detail. The four secretaries to serve prior to DeVos were all protected by the department’s small security force, with an exception being made for DeVos when then-Attorney General Jeff Sessions ordered her to receive protection from the Marshals Service. It is unclear why the cost of DeVos' protection is expected to increase in the 2020 fiscal year, as the Marshals Service did not clarify the situation to Politico. DeVos’ case is also notable, because she is the wealthiest member of Trump’s Cabinet, with an estimated net worth of $1.3 billion, according to a report from Business Insider published last year.

DeVos has faced a number of other controversies during her tenure. In April, DeVos dodged questions at a congressional hearing about a report which found that the department had been scammed by fraudulent or poorly managed charter schools. DeVos herself is a long-time advocate of using taxpayer money to fund charter schools.

Jeff Bryant, the director of the Education Opportunity Network, and Carol Burris, the executive director of the Network for Public Education, co-authored a report which found that up to $1 billion awarded by the federal government’s Charter Schools Program (CSP) had been allocated to schools that only opened for brief periods or did not open at all. They estimated that roughly one-third of the $4.1 billion spent by CSP had ultimately been wasted.

DeVos has also been criticized for pursuing policies perceived as discriminatory. Under her tenure, the Department of Education has attempted to delay implementing President Barack Obama’s regulations to fight racism in special education, expressed support for schools that bar transgender people from working or attending and threatened to pull money from a Middle East studies course jointly run by the University of North Carolina and Duke University for supposedly portraying Islam too positively.