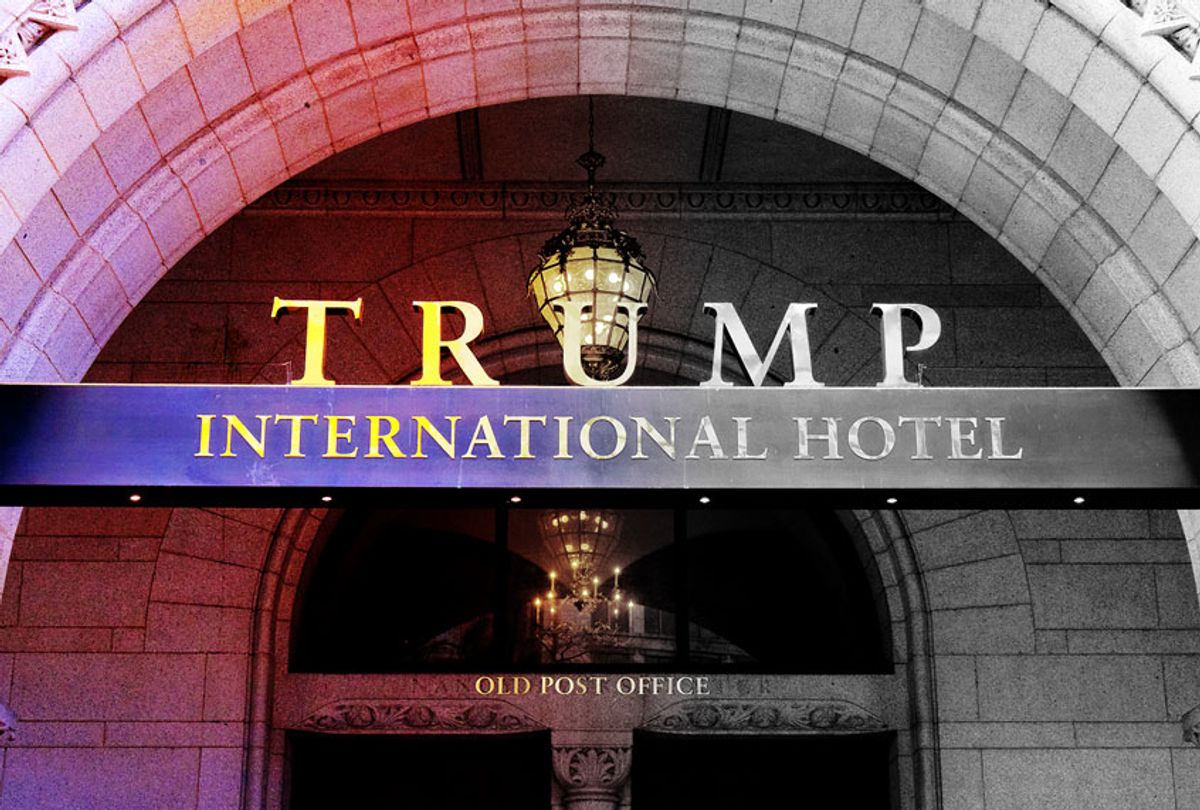 The north face of the Trump International Hotel is seen in this general view. Monday, March 11, 2019, in Washington D.C. (AP Photo/Mark Tenally)
--

House investigators are probing allegations that groups, including at least one foreign government, have tried to curry favor with President Trump by booking rooms at his hotel but never actually using them.

Democrats are investigating these “ghost bookings” as part of a larger probe by the House Oversight Committee into whether Trump violated the emoluments clause of the Constitution by accepting money from foreign governments at his businesses, Politico reports.

“Now we’re looking at near raw bribery,” Rep. Gerry Connolly, D-Va., who chairs an Oversight subcommittee with jurisdiction over Trump’s Washington hotel, told the outlet. “That was the risk from Day One: foreign governments and others trying to seek favor because we know Trump pays attention to this. ... It’s an obvious attempt to curry favor with him.”

House investigators began looking at these bookings after being alerted that a foreign government and a trade group booked a “large quantity of rooms but used only a fraction of them,” according to the report.

Rep. Ro Khanna, D-Calif., who sits on the Oversight Committee, told Politico that the bookings would violate the law if they were solicited by Trump or his staff. Even if they didn’t, he said, it shows that groups and foreign governments with business before the federal government think they can ingratiate themselves with the administration by patronizing Trump’s properties.

“If true, at minimum, this suggests there is a culture of corruption that the administration has created,” Khanna said. “There’s a sense that to curry favor you have to engage in pay to play. That’s exactly what the American people hate about Washington.”

The probe into the bookings could factor into the House impeachment inquiry into Trump. Though House Speaker Nancy Pelosi is considering limiting the probe to Trump’s pressure on Ukrainian President Volodymyr Zelensky to investigate former Vice President Joe Biden, a lawmaker told Politico that allegations into whether Trump is illegally profiting from his office and whether he obstructed justice in former special counsel Robert Mueller’s probe could be included in the inquiry.

“The unifying theme of congressional investigations is examining the president’s abuse of his office and his power to advance his personal political agenda and his goal of financial self-enrichment,” Rep. Jamie Raskin, D-Md., told the outlet.

Trump has admitted to asking Zelensky to look into Biden and released a partial transcript showing as much, but the call included more than just that request. Trump also pressed Zelensky to help discredit the Mueller probe. Zelensky spent much of the call trying to flatter Trump, praising his “drain the swamp” message and his big plane.

At one point, Zelensky appeared to try to curry favor with Trump by noting that he recently stayed at his property.

“Actually last time I traveled to the United States, I stayed in New York near Central Park and I stayed at the Trump Tower,” Zelensky told Trump.

That largely overlooked part of the call is part of a much larger trend. More than 110 officials from nearly 60 different countries have been spotted at Trump hotels and other Trump properties since he took office in 2017, The New York Times reported last month. Numerous companies with business before the government have stayed at Trump’s properties as well. T-Mobile executives have spent $195,000 at Trump’s D.C. hotel since they sought government approval for a $26 billion merger with Sprint, for example.

The Republican Party has also spent millions at Trump’s properties. The Trump Organization was paid $4.2 million by Republican candidates and campaign committees during the last election cycle, The Washington Post reported. Trump’s own re-election campaign has spent more than $740,000 at his properties since he took office. In all, at least 117 Republican lawmakers and candidates have spent campaign or PAC money at the president’s properties.

House Oversight Committee chairman Elijah Cummings, D-Md., and Judiciary Committee chairman Jerry Nadler, D-N.Y., said that the payments represent a possible violation of the emoluments clause and must be investigated as part of the broader impeachment inquiry.

“Potential violations of the Foreign and Domestic Emoluments Clauses of the Constitution are of grave concern to the Committee as it considers whether to recommend articles of impeachment,” the chairmen said.