Trump and Giuliani have embraced many nutbar theories. The one that may doom them was a political hit gone wrong 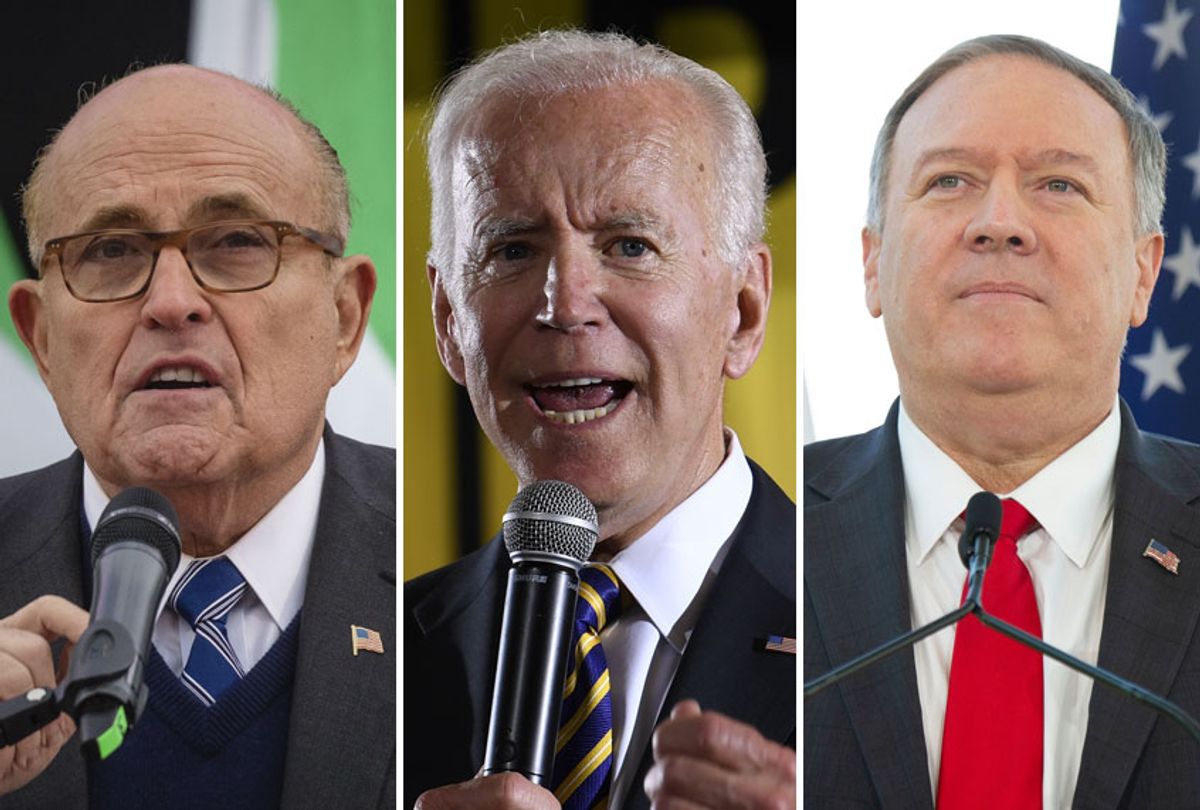 Bossert was talking about two of the strands of what turns out to be a convoluted set of interlocking conspiracy theories, all of which involve Rudy Giuliani and all of which are, quite frankly, completely nuts.

There's the one about former Trump campaign manager Paul Manafort and the "Black Ledger," which forms one strand of the ludicrous "Ukraine framed Russia to help Hillary Clinton" 2016 collusion theory. Manafort knows his way around Ukraine and Giuliani has reportedly been consulting with him in prison, where Manafort is serving time for various felonies he committed during his work there.

The "CrowdStrike scandal" mentioned by Bossert intersects with the "Black Ledger" theory. This one holds that the security firm that first identified the Russians as being behind the Democratic National Committee hack was actually owned by a Ukrainian (it isn't and never has been) and was in on the plot — as were the FBI and the DNC, including murdered DNC staffer Seth Rich, who supposedly did the actual hacking as an "inside job." All of it is utter nonsense. (The New York Times' Scott Shane did a nice report on how Trump got hooked on this stuff.)

There's also Attorney General William Barr's "investigation of the investigation" which has him gallivanting all over the globe trying to prove that the CIA had it in for Trump and set up the bogus Russia investigation to trap him. This must also means that Robert Mueller was in on the scheme, since his team indicted a whole bunch of Russians.

As I said, Rudy Giuliani is at the center of all of these conspiracy theories, working under the influence of a couple of Ukrainian conmen in Florida with the full participation of his client, the president of the United States. They are both wallowing in the right-wing fever swamps and it's as fetid and poisonous as Chernobyl during the meltdown.

Of course, there is also the other big Ukraine scandal that has gotten Trump into such hot water: the alleged influence-peddling extravaganza around Joe and Hunter Biden. As is his wont, Trump has blurted out a confession of wrongdoing, admitting that he asked the Ukrainian president to gather some dirt on his potential political rival as Trump was inexplicably holding up promised military aid. On Thursday, he said it again, adding that he thinks China should investigate the Bidens as well — in the same breath that he made new threats about the ongoing trade war.  He just can't quit self-impeaching.

Later on Thursday evening, the House Intelligence Committee released transcripts of Trump's Ukraine and EU ambassadors and envoys texting back and forth about Trump's "crazy" quid pro quo, which makes clear that they were all aware of what was going on and were either trying to document their displeasure or cover the whole business up. They worked very hard to get Ukrainian President Volodymyr Zelensky to sign a statement saying his government was taking up the investigation of Joe and Hunter Biden. in exchange for a visit to the White House and the release of nearly $400 million in military aid. To his credit, Zelensky didn't do it, perhaps understanding that he was dealing with people who were unreliable.

Unlike all the other Ukraine scandals, this Biden conspiracy didn't spring from the right-wing fever swamps, nor did Rudy Giuliani "uncover it" as he likes to brag he did. This one was a professional hit job carried out by the same team that brought you "Clinton Cash," the book about the Clinton Foundation that formed the basis of the "Crooked Hillary" campaign.

This time it was a book called "Secret Empires: How the American Political Class Hides Corruption and Enriches Family and Friends," by "Clinton Cash" author Peter Schweizer, who is now an editor at Breitbart News and president of the Government Accountability Institute, a nonprofit he founded with Steve Bannon and right-wing billionaire Rebekah Mercer. Its purpose is clear enough: To launder far-right smears and dirty tricks .

I wrote about this gang back in 2015 for Salon when Schweizer gulled the New York Times and the Washington Post into partnering with him on the Clinton story, apparently convincing them that the man who wrote "Architects of Ruin: How Big Government Liberals Ruined the Global Economy and Will Do It Again if We Don't Stop Them" was a straight journalist just looking for a little accountability.  The book was a huge success at what it set out to do: Tar Hillary Clinton as a corrupt criminal. Why not do it again with Joe Biden, who everyone knew was likely to run against Trump in 2020?

This time, with the notable exception of a couple of dubious stories in the New York Times, the media didn't bite on the Biden story with quite the same eagerness. Bloomberg's Joshua Green points out in this article on the subject that while it didn't catch on in the mainstream press, it was huge in the conservative media, which apparently bothered Bannon a great deal. After all, the GAI was formed to push its smears into the mainstream.  Stories that exist only in the conservative bubble simply don't have the same power to move the broader electorate.

Green notes that because Trump mainlines conservative media, he saw the story as very beneficial to his cause, adding that "what differentiates Trump from other power-consumers of conservative media is that he’s the president and was willing to use his governmental powers to attack a political rival." Indeed he was. And it was a big mistake — it finally got the Democrats off the dime on impeachment.

Schweizer denies working with Giuliani or the White House. But then, he didn't have to. He planted the seeds and then Fox News and Rush Limbaugh and the Trump and Rudy show made it grow. Green writes:

[T]here’s no question the anti-Biden effort has boomeranged on Trump, who is suddenly under siege from the Democrats’ fast-moving impeachment inquiry. ... At this point, no one can say what effect all this will have on the 2020 election. But it looks increasingly like it won’t be the one that Biden’s antagonists, from Trump to Schweizer, were aiming for.

It's possible this will end up hurting Joe Biden, as these smears almost always do. But it's hurting Trump even more. And to be honest, I'm not sure that Schweizer and company care that much. If a pain in the neck like Donald Trump gets caught in the crossfire I doubt they'll lose any sleep over it. Political hitmen aren't sentimental. They just move on to their next assignment.