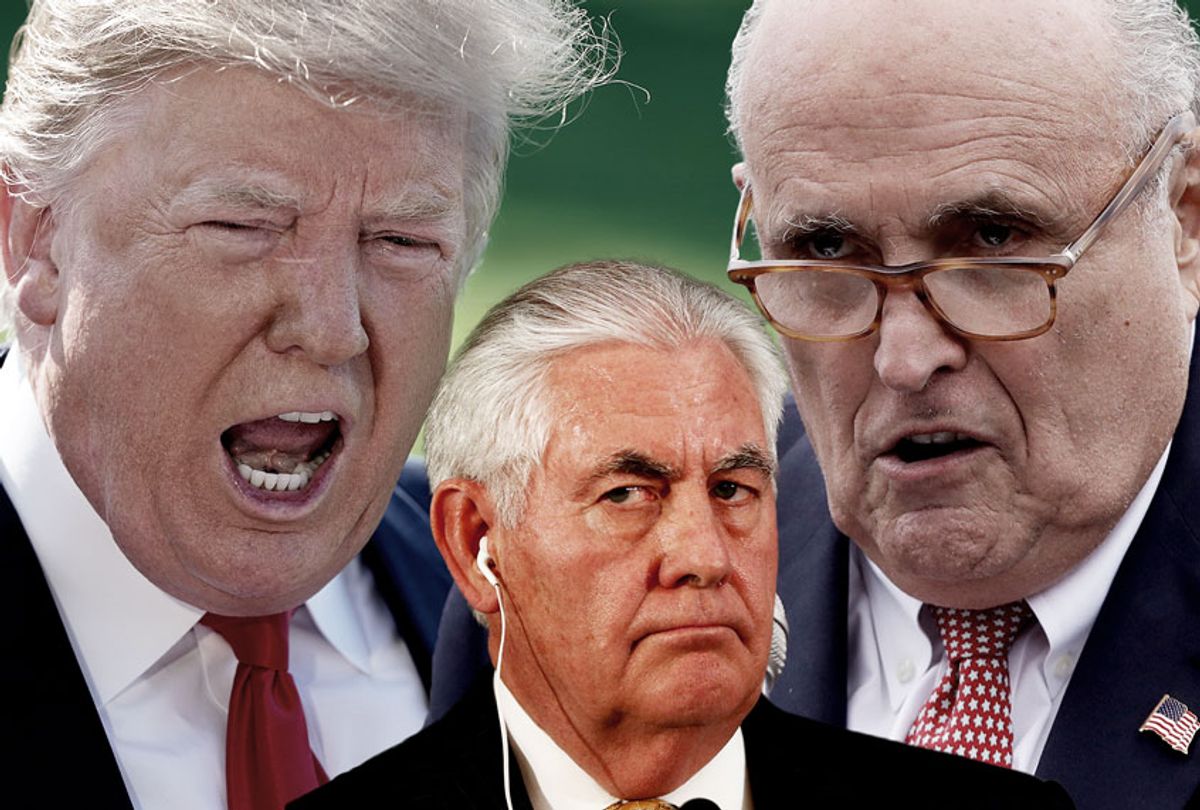 Tillerson reportedly refused, saying the move would constitute an interference in an active investigation. He repeated his objections to then-chief of staff John Kelly in a hallway conversation in the White House.

At the time, the trader, Reza Zarrab, was being prosecuted by a New York federal court on charges of evading U.S. sanctions against Iran's nuclear program. He hired the president's personal lawyer, Rudy Giuliani, and former Attorney General Michael Mukasey to represent him.

Part of the president's request included asking him Tillerson to speak with Giuliani, who was not the president's personal attorney at the time but is now. Giuliani initially denied ever mentioning Zarrab's case with Trump but later said he might have done so, according to the report.

"Suppose I did talk to Trump about it — so what? I was a private lawyer at the time," Giuliani told the news outlet. "Maybe I'm wrong. Maybe at some point I dropped his name in a conversation."

He then suggested that perhaps one of Trump's staffers spoke to him about Zarrab's case when he discussed arranging a swap of Zarrab for Andrew Brunson, an American pastor jailed in Turkey who was later released in 2018, with U.S. officials.

Giuliani also said he discussed Zarrab's case with State Department officials, although he did not say if he spoke to Tillerson about the matter.

The White House, along with representatives for Tillerson and Kelly, all declined comment.

He eventually pleaded guilty and reportedly testified against Mehmet Hakan Atilla, who headed international banking at Halbank, a state-owned Turkish bank. Zarrab reportedly said Erdoğan knew of and supported the laundering effort on behalf of Iran. The Turkish leader has denied those allegations.

The details of the case and Tillerson's objection come as the president faces an impeachment inquiry in the House of Representatives, which grew from a whistleblower report on his communications with another foreign leader, Ukrainian President Volodymyr Zelensky. Giuliani is also steeped in events in Ukraine.

It also comes as the president faces sharp bipartisan criticism over his abrupt decision on Sunday to withdraw U.S. troops from northern Syria.

Trump announced the move after a phone call with Erdoğan. He has invited the Turkish leader to the White House in November.

Sanctions against Turkey are already on the table. Erdoğan said Wednesday that Turkey had already launched its military offensive in northern Syria against U.S.-backed Syrian Kurdish fighters, which have been a crucial U.S. ally in the fight against ISIS.

Tillerson, who was fired by Trump as the country's top diplomat in a tweet last March, has said publicly that he frequently had to push back on requests from Trump he said would have broken the law.

"So often, the president would say, 'Here's what I want to do and here's how I want to do it.' And I would have to say to him, 'Mr. President, I understand what you want to do but you can't do it that way,'" Tillerson told CBS News veteran Bob Schieffer at an event in Texas last year.  "It violates the law. It violates treaty. You know, and he just — he got really frustrated when we'd have those conversations."