Kamala Harris, a Democratic presidential candidate and former prosecutor, applauded the move: "I have questions" 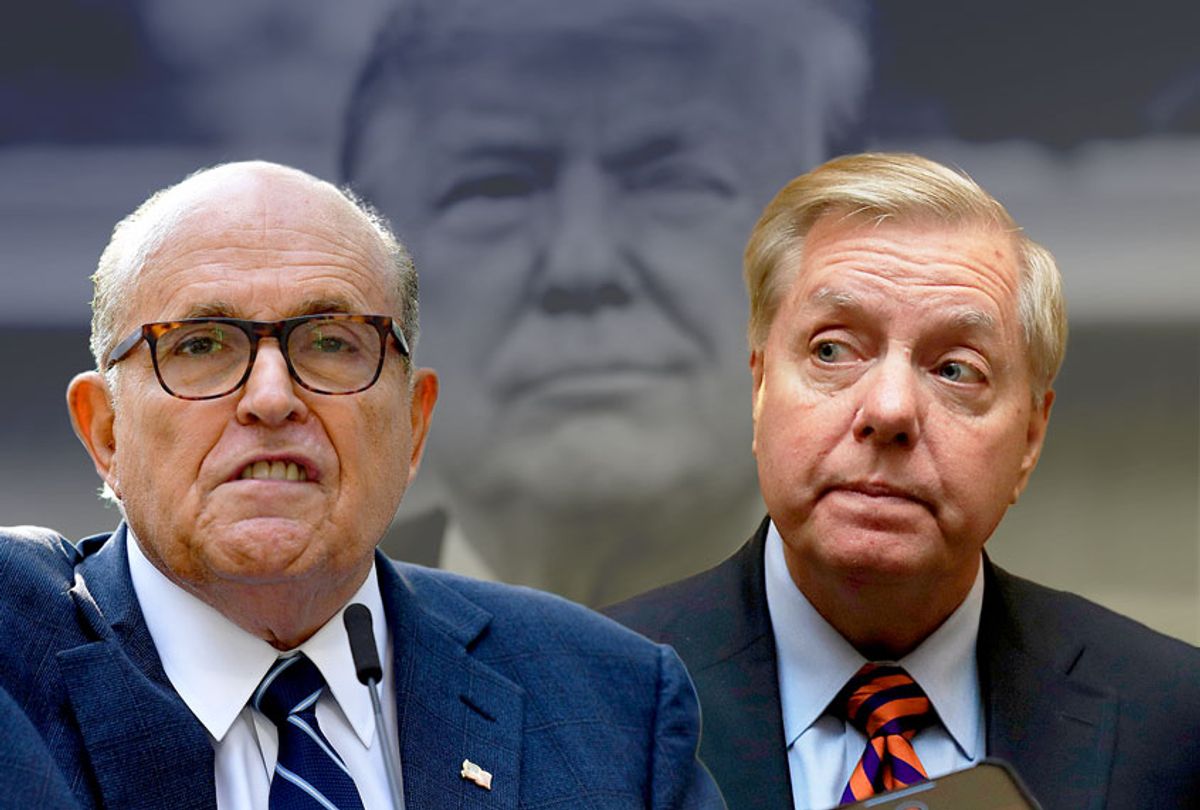 Sen. Lindsey Graham, R-S.C., has invited Rudy Giuliani, President Donald Trump's personal attorney, to appear before the Senate Judiciary Committee in order to testify about his client's communications with Ukraine.

Graham, one of the president's most vocal defenders on Capitol Hill, said in a tweet Tuesday morning that he has "heard on numerous occasions disturbing allegations by [Giuliani] about corruption in Ukraine."

"Given the House of Representatives' behavior, it is time for the Senate to inquire about corruption and other improprieties involving Ukraine," Graham added. "Therefore I will offer to Mr. Giuliani the opportunity to inform the committee of his concerns."

California Sen. Dianne Feinstein, the top Democrat on the Senate Judiciary Committee, said having Giuliani testify before the panel would give lawmakers "an opportunity to help separate fact from fiction."

"I welcome the opportunity to question Rudy Giuliani under oath about his role in seeking the Ukrainian government's assistance to investigate one of the president's political rivals," Feinstein said Tuesday in a statement.

Giuliani, the former mayor of New York, has emerged as a central figure in the Democratic-led impeachment inquiry into Trump. The investigation centers on Trump's July 25 call with Ukrainian President Volodymyr Zelensky.

Trump asked Zelensky on the call to do him "a favor" and investigate the business dealings of former Vice President Joe Biden's son, Hunter Biden, and a conspiracy theory about Ukrainian meddling in the 2016 election.

In recent weeks, Giuliani has repeatedly alleged that Joe Biden, a leading Democratic presidential candidate, improperly pushed Ukraine to fire its top prosecutor in order to protect his son's business interests. However, there has been no evidence of wrongdoing by either Biden.

A whistleblower complaint to the intelligence community, made public late last month by the House Intelligence Committee, describes Giuliani and William Barr, Trump's attorney general, as the president's "personal envoys" on matters related to Ukraine.

Ukrainian officials were allegedly "led to believe that a meeting or phone call between the president and President Zelensky would depend on whether Zelensky showed willingness to 'play ball'" on the messages they were receiving from Giuliani and Ukraine's top prosecutor, Yuriy Lutensko.

Giuliani has repeatedly refuted the claims made in the whistleblower report, claiming that the State Department asked him to meet with one of Zelensky's top advisers, Andriy Yermak.

Giuliani has stated that he shared all of the details of his conversations with Yermak with the State Department. He has claimed that he also has a "nice little trail" of text message exchanges with the former U.S. special envoy to Ukraine, Kurt Volker, to back up his claims. (Volker resigned from his post amid the fallout from the scandal.)

It is unclear if Giuliani will accept Graham's invitation and appear before the Senate Judiciary Committee. Trump would likely have to waive attorney-client privilege in order for Giuliani to testify before Congress, and it appears unlikely that he will do so.

If Giuliani was to testify before the Senate Judiciary Committee, he would face questions from three Democratic presidential candidates: Sens. Cory Booker of New Jersey, Kamala Harris of California and Amy Klobuchar of Minnesota. The top Democrats would likely use the high-profile setting in order to take on Trump and grill Giuliani.

Shortly after Graham invited Giuliani to appear before the panel, Harris, a former prosecutor, applauded the move.