"It clearly wasn't working, so we stopped it during an executive order," Nielson said of the controversial policy 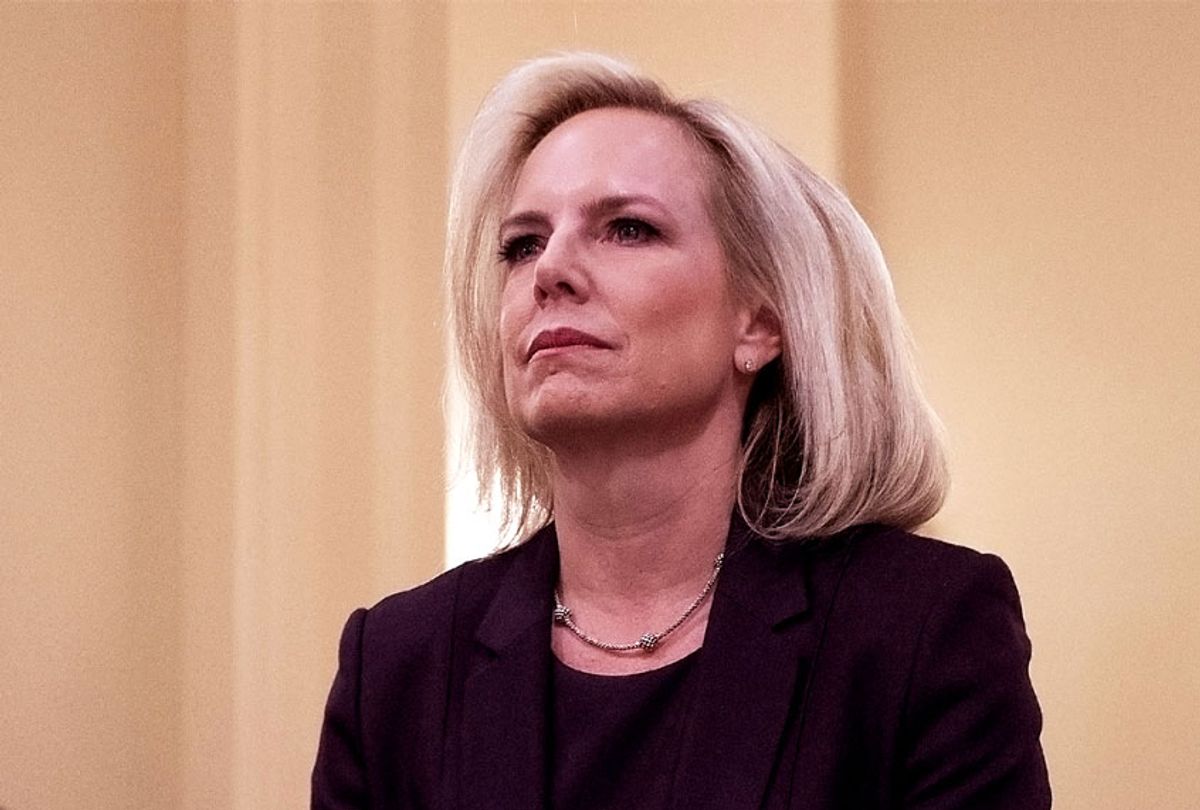 Former Homeland Security Secretary Kirstjen Nielsen said Tuesday that she has not regrets about "enforcing the law" last year as the Trump administration implemented its "zero tolerance" policy, which caused thousands of migrant children to be separated from their families.

"I don't regret enforcing the law, because I took an oath to do that," Nielsen said at Fortune's Most Powerful Women Summit in Washington, adding that her role at DHS was to "enforce the law — not to separate families."

However, Nielsen said she wished the coordination and information flow had "worked a lot better."

Her comments came during a brief and combative interview with Amna Nawaz, the national correspondent for "PBS NewsHour," which focused on Nielsen's controversial role in the separation of families at the U.S.-Mexico border.

In 2018, thousands of children were ripped from their families and placed in detention centers because of the White House's decision to prosecute people found entering the country illegally. Nielsen signed off on a memorandum, which allowed for the child separations.

Health experts have repeatedly warned that separating children from their parents — even for a short period of time — can result in long-term trauma, behavioral and developmental issues. Last month, a government watchdog found that separated children suffered "significant trauma" as a result of the policy. Some separated children experienced "psychological pain," which translated into physical symptoms.

When asked if anyone had raised concerns about the harm separation could inflict on children, Nielsen said no concerns were raised from staff.

Last year, Nielsen denied that a policy of separating families at the border existed, despite then-Attorney General Jeff Sessions' admission that the administration's "zero-tolerance" policy was likely to cause children to be separated from their families.

Tuesday marked Nielsen's first public interview since her resignation in April. She had been scheduled to appear at the Atlantic Festival last month but eventually dropped out.

Fortune came under scrutiny for including Nielsen in its speaker lineup. More than 54,000 people signed a petition asking the magazine to remove Nielsen from the event.

2016 Democratic presidential nominee and former Secretary of State Hillary Clinton pulled out of the summit last week, citing a scheduling conflict, but a person close to Clinton told Slate that she made the decision after learning of Nielsen's inclusion in the lineup.

Dream Hampton, the executive producer of "Surviving R. Kelly," also canceled her appearance at the event, saying in a statement that "Fortune should not be giving Kirstjen Nielsen a platform to rehabilitate her image."

Singer-songwriter Brandi Carlile became the latest celebrity to drop out of the event Monday. In a statement shared to Twitter, she wrote: "Respectfully, I absolutely cannot support Kirsten Nielsen having a voice among the most powerful and inspiring women in America."

A host of liberal politicians and activists still participated in the summit, along with business leaders major players in the entertainment industry, despite pressure to withdraw from the event in protest of Nielsen.

Nielsen on Tuesday revealed that she had stepped from her post at DHS, because "saying no" and pushing back against some of the policies that the president and his aides supported was "not going to be enough."

"What led me to resign is there were a lot of things — that there were those in the administration who thought that we should do," Nielsen said. "Just as I spoke truth to power from the very beginning, it became clear that saying no and refusing to do it myself was not going to be enough, so it was time for me to offer my resignation."

Nielsen was replaced with Kevin McAleenan, but he stepped down from his post earlier this month.

Earlier this month, President Donald Trump announced that he would nominate Nielsen to the National Infrastructure Advisory Council, an entity of DHS. Nielsen told the audience Tuesday that the position is unpaid, and she would be advising the government on cyber and critical infrastructure needs.

Pressed on why she was currently advising the White House, Nielsen retorted: "Are you telling every CEO in here that they should never advise the government?"

"I wish we had gotten to cyber, because that's why I was originally here," Nielsen said at the end of the heated interview. " Cyber is the biggest threat that we face in homeland today."