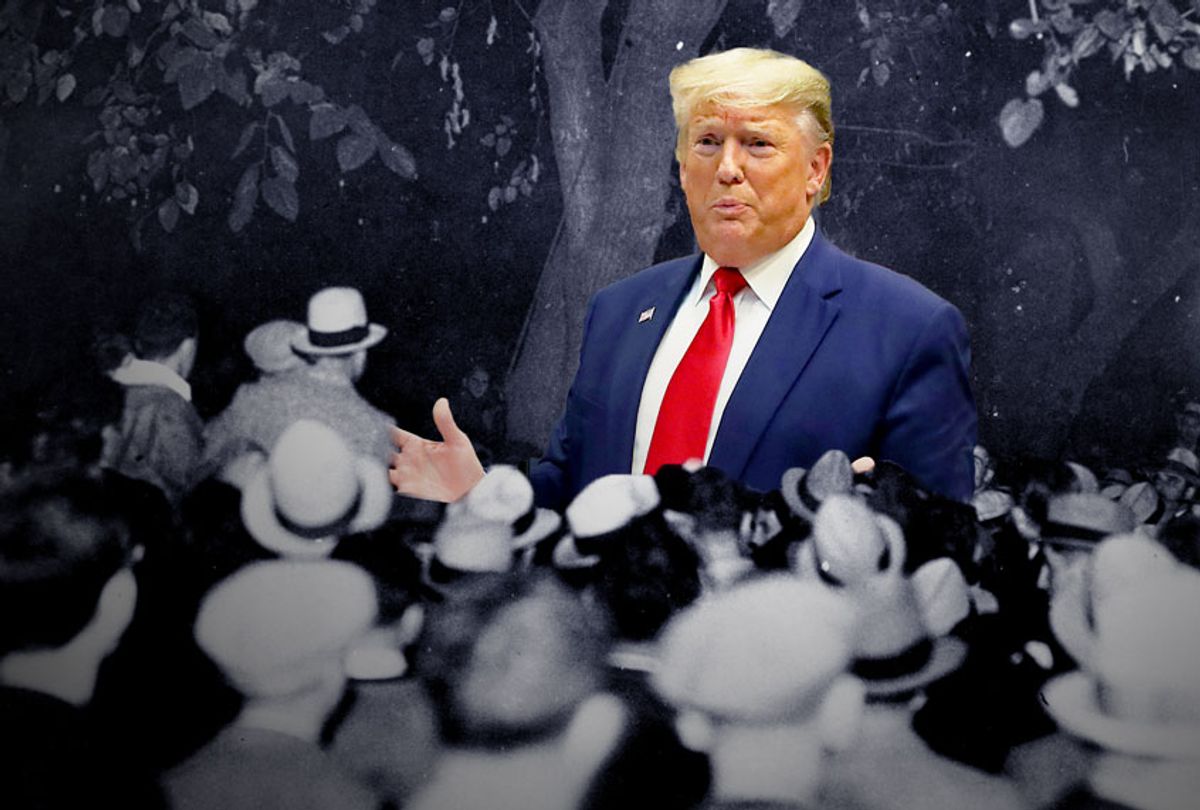 Historian Ibram X. Kendi believes Donald Trump is the second most racist president in American history, ranking only behind Andrew Jackson. Based on Trump’s ongoing behavior, Kendi may need to re-evaluate that assessment.

On Tuesday, America’s racist in chief managed to combine his lawlessness and white supremacy in a single tweet:

So some day, if a Democrat becomes President and the Republicans win the House, even by a tiny margin, they can impeach the President, without due process or fairness or any legal rights. All Republicans must remember what they are witnessing here — a lynching. But we will WIN!

In the worst of ways, Donald Trump has shown himself once again to be a deft multitasker of ignorance, hate and authoritarianism.

Lawlessness: Donald Trump does not believe in the rule of law or the U.S. Constitution. He has said as much, describing the Constitution as “phony.”

Impeachment is also one of the most important elements of the Constitution because it is the ultimate protection against a tyrant. Trump and his regime, of course, do not believe that any substantive restrictions on the president’s behavior exist — as long as the president is Donald Trump or another Republican.

White supremacy: At least 4,000 black Americans were killed by white mobs and individuals in the extrajudicial killings known as lynchings across the United States during the 19th and 20th centuries. This political terrorism was not confined to the South. Black people were also lynched in states such as Indiana. The goal of white-on-black racial terrorism was to intimidate and control black people who desired, struggled for and demanded their full human rights as citizens of the United States. Racial pogroms and lynchings — especially what are known as “spectacular lynchings,” attended by hundreds or even thousands of white people — were a for of terrorism used by whites to intimidate and control black Americans.

Trump’s comments on Tuesday are also a reminder that lawlessness and white supremacy are not discrete and separate from one another. They have a complex relationship.

White supremacy is maintained through the law: Racists ignore the law when they need to, and invoke the law when it serves their purposes.

White-on-black lynchings were not vile acts perpetrated by outliers in white society, people who were exceptionally barbarous compared to the “ordinary” white person. Lynchings were part of a regime of racial terrorism with the goal of maintaining white control over black people in all areas of American life. This culture of racial terrorism that Trump references so casually was central to American society. That ethos of racism as violence against black people specifically, and against nonwhite people (including Latinos and Muslims) more generally, continues through to the Age of Trump. This violence has “evolved” to fit the sensibilities of the post-civil rights era.

In his book "Trouble in Mind,"  historian Leon Litwack writes about America’s culture of lynching:

Neither crazed fiends not the dregs of white society, the bulk of the lynchers tended to be ordinary and respectable people, animated by a self-righteousness that justified their atrocities in the name of maintaining the social and racial order and the purity of the Anglo-Saxon race. The mobs who meted out "summary justice” were pronounced by one Georgian as "composed of our best citizens, who are foremost in all works of public and private good”…. Drawn from all classes in southern white society, from the "red-necks” to the best people,” lynchers came together in an impressive show of racial and community solidarity ….

But white solidarity almost always prevailed. Townspeople closed ranks to protect their own kind, thereby becoming partners in the crimes committed. Eyewitnesses refused to testify, and grand juries refused to bring indictments against easily identifiable mob participants; even if they had, juries would have refused to convict, whatever the evidence.

Trump defenders, as they always do, have summoned ridiculous defenses. They note that Supreme Court Justice Clarence Thomas said, some decades ago, that he was a victim of a “high-tech lynching.” They claim people are too "sensitive" because of "political correctness.” They claim that lynchings don’t necessarily have anything to do with race. of course, they insist that Trump is not a racist; he is misunderstood or being persecuted by Democrats and the "liberal media.”

Like almost all defenses of Trump’s behavior, such claims are easily dismissed by honest and ethical human beings.

The racism of Trump’s comments about lynching is easily exposed through several basic questions.

Who is Donald Trump? He is a white supremacist who rose to public prominence through the racist “birtherism” campaign against Barack Obama. Trump believes that Hispanics and Latinos are a race of “rapists” and “murderers.” Trump has said that nonwhite Americans who criticize him are “traitors” who “should go back to where they came from.” In 1989, Trump took out full-page ads in New York newspapers calling for the execution of five black and Latino teenagers who were falsely accused of raping a white woman in Central Park. As shown by a federal lawsuit in the 1970s, Donald Trump and his father refused to rent property to blacks or Latinos.

Despite an escalating pattern of white supremacist violence, Donald Trump has not forcefully condemned such people, nor has he marshaled the federal government’s resources against them. Trump infamously described the white supremacists and neo-Nazis of the “New Right” who engaged in a violent rampage in Charlottesville in 2017 as “very fine people.”

It was not Trump’s ancestors who were the “strange fruit” of Billie Holiday’s song of the same name, thousands of black human beings whose bodies were shot full of holes, burned alive, harvested for souvenirs, and left “swinging in the southern breeze; strange fruit hanging from the poplar trees” as a warning to other black people who dared not to know "their place” in American society.

Trump has neither the capacity for empathy and sympathy or the carefulness, intelligence, grace and human dignity required to speak in an intelligent way about the thousands of black human sacrifices that were made to America’s cult of white supremacy.

What do we know about Donald Trump’s policies as president? Trump’s overall public policy is centered upon cruelty toward nonwhite people and doing everything possible under the law (and often in violation of it) to ensure that white people remain the country’s most powerful group. Trumpism is a white rage backlash against the civil rights movement and American multiracial democracy. Donald Trump is the human distillation of white racial resentment and white rage.

Who are Donald Trump’s public? Racists are more likely to be Republicans. Conservatism and racism are fully now one and the same thing in post-civil rights America. Social scientists and other analysts have repeatedly shown that overt racism, racial resentment, nativism and racial authoritarianism motivate Trump’s voters.

Trump is looked at as a hero and role-model by individual white supremacists as well as white racist terrorist organizations such as the Ku Klux Klan and the Nazis. In fact, the Ku Klux Klan formally endorsed Donald Trump’s presidency in 2016.

There is NO reason to liken the Constitution’s formal remedy for removing a president to an illegal mob action that seeks to subvert the rule of law with the kidnapping, murder and mutilation of a suspect…. Comparing impeachment proceedings to a lynching is even more insulting when you’ve cozied up to the very forces of white supremacy that historically have used lynching as a tool to terrorize racial minorities….

[L]ynching is essentially the subversion of the rule of law. Impeachment, in sharp contrast, is the rule of law. It's the constitutional provision for handling a president who has disgraced his office, as designed by the founding fathers. YOU are seeking to subvert that….

[Y]ou are seeking to subvert the rule of law here by spreading fear, confusion and hatred. Again, I think it’s insulting to bring lynching into this, but if anything here even remotely resembles the dynamics of a lynch mob, it’s not your critics.

It is no coincidence that on Tuesday the acting ambassador to Ukraine, Bill Taylor, told members of Congress that the Trump administration did in fact make military aid to Ukraine contingent on that country’s president publicly announcing that he would investigate Joe Biden and his son. Taylor’s testimony is more proof that Donald Trump should be impeached, convicted and removed from office for abuse of power and other apparent crimes, including bribery and extortion as well as encouraging foreign interference in the 2020 election on his behalf.

As the impeachment process against Trump moves forward, he will dig deeper and deeper into his bucket of racist political scatology, throwing it about in an effort to blind and distract those Americans who believe in the Constitution, the rule of law, and democracy. Donald Trump's political cult members and other supporters will rally around him, and will be further stained and soiled by Trump’s foul antics.

Of course, Trump and his supporters should be condemned for their racism and white supremacy. But decent Americans who are fighting to protect American democracy from the onslaught of Trumpism should always ask toward what end the president and his movement are using racism, white supremacy and other abominable behavior.

Resistance against Trump need not be binary. It must be multi-spectrum. But to defeat Trumpism, the resistance must first grasp Donald Trump’s strategic goals. Of course his tactics matter. But the big picture should always be in focus.