"You can't pick and choose which aspects of due process you're going to use,” Gowdy said as he recalled Benghazi 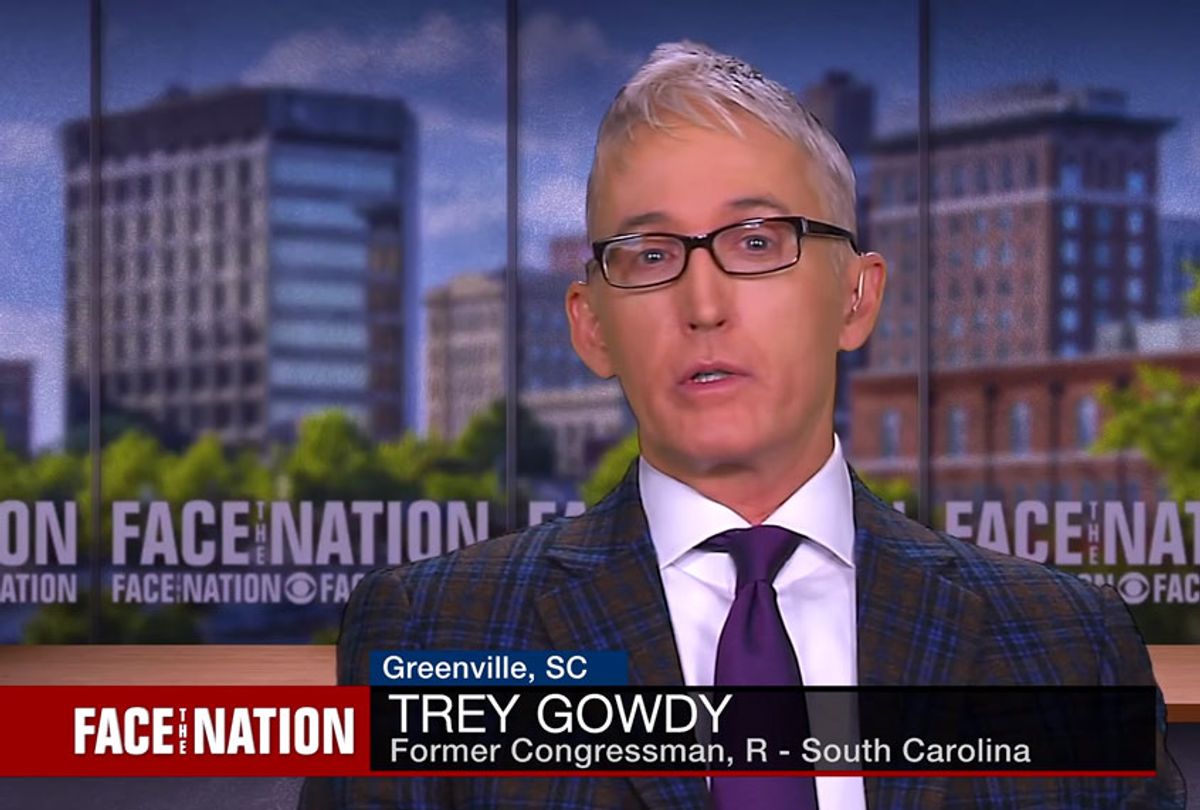 Trey Gowdy, the former Republican congressman from South Carolina who became a household name as the chairman of the House Select Committee on Benghazi, said he supports Democrats’ decision to hold hearings in the impeachment inquiry against President Donald Trump behind closed doors.

During an appearance Sunday on CBS News’ “Face the Nation," moderator Margaret Brennan showed Gowdy a clip from April 2018 in which he advocated in favor of closed-door hearings. Although current Republican members of Congress have criticized the process as "secret," a similar one was used by Gowdy during the administration of former President Barack Obama. Gowdy confirmed to Brennan that he "100 percent” stands by his original position.

“You can't pick and choose which aspects of due process you're going to use,” Gowdy said. “It's not just the privacy. I mean, the reason we respect executive branch investigations isn't because they're behind closed doors — it's because there are no leaks."

At the same time, Gowdy took a swipe at House Intelligence Committee Chairman Adam Schiff, D-Calif., for holding regular press conferences about the hearings, alleging that there had been too many leaks regarding the contents of the inquiry.

"I do understand the Republican frustration with the current investigation. My bias has always been towards investigations that wait until the end before they share their conclusions,” Gowdy said. "It’s just not fair to do it in an hour-by-hour basis."

Gowdy also addressed questions Sunday about the Trump administration’s effort to hire him for its impeachment defense team, which was reported by The New York Times earlier this month.

“I don’t represent the president as of today. I don’t know what, if anything, will exist in January. It may be over,” Gowdy told Brennan. "My sense is that the president needs folks who can represent now before the House, the Senate and indirectly through television shows and print media."

Despite being an outspoken conservative, Gowdy has been willing to stand up to the Trump administration in the past when it comes to legal issues. Last year, while still chairman of the House Oversight Committee, Gowdy demanded that the Trump White House turn over information about Ivanka Trump’s use of private email as she conducted official government business.

“In light of the importance and necessity of preserving the public record and doing so in a manner that is reflective of relevant statutory and regulatory requirements, the committee must assess whether the White House took adequate steps to archive Ms. Trump’s emails and prevent a recurrence,” Gowdy wrote in a letter at the time.

In the Senate, where Republicans would hold a trial if the House of Representatives chooses to impeach the president, many caucus members have "voiced exasperation at the expectation that they defend the president against the troublesome picture that has been painted, with neither convincing arguments from the White House nor confidence that something worse won’t soon be discovered," according to a report by The Washington Post.

One veteran Republican senator told the newspaper that the situation felt "like a horror movie.”