Trump’s own rules of civility taught World Series fans to boo and chant, “Lock him up!”

Many presidents have been booed before, but Trump’s reception turned his usual rally behavior against him 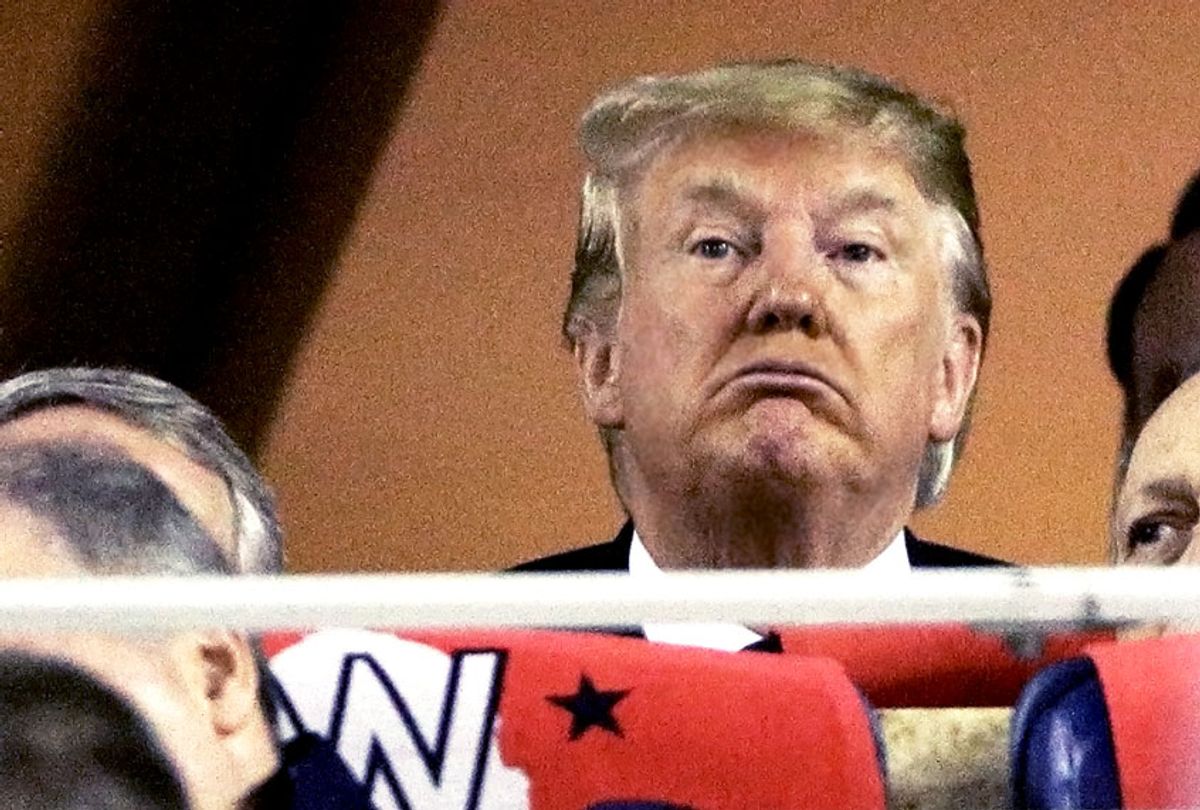 Donald Trump attends Game Five of the 2019 World Series between the Houston Astros and the Washington Nationals at Nationals Park on October 27, 2019 in Washington, DC. (Photo by (Patrick Smith/Getty Images)
--

All I could think of when watching President Donald Trump’s Sunday appearance at Game 5 of the World Series was his August rally in Cincinnati Ohio.

There he stood in the middle of U.S. Bank Arena, smirking as nearly 17,000 people chanted, “Lock her up! Lock her up!” He had just mentioned his former political opponent Hilary Clinton, asking the crowd if they remembered the day she used the word “deplorable.”

As Trump has returned to the campaign trail in advance of the 2020 election, he’s gotten a surprising amount of mileage out of that chant, which supporters of the President commonly used during the 2016 election. But last night, in the midst of the his jumbotron introduction, a flood of boos erupted through Nationals Park. An “Impeach Trump” sign was hung on the left field ramps, while a series of “Veterans for Impeachment” posters were spotted behind home plate.

It was a surprisingly unifying moment in the midst of a wave of political unrest. By this morning, however, the public display had already brought about some pearl-clutching from some political commentators, including “Morning Joe” hosts Joe Scarborough and Mika Brzezinski, who called the behavior “just un-American.”

"We find it sickening when it happens at his rallies," Brzezinski said.

"Of course it's sickening. We are Americans,” Scarborough said. “And we do not do that. We do not want the world hearing us chant, 'Lock him up,' to this president or to any president."

Trump isn’t the first politician to be booed at a baseball game. It’s happened to former Presidents Barack Obama, George W. Bush, and George H.W. Bush, as well as former Mayor of New York and Trump attorney Rudy Giuliani. But conversations of civility in public spaces have certainly heightened in the Trump Era; this is a topic I considered in June, after Eric Trump alleged he was spit on by an employee at Aviary, a high-end cocktail bar in Chicago.

At the time, Eric Trump told Breitbart News that it was “a purely disgusting act by someone who clearly has emotional problems.”

“For a party that preaches tolerance, this once again demonstrates they have very little civility,” he said.

This came after other Trump-associated politicians like Mitch McConnell, Elaine Chao, and Kirstjen Nielsen had been heckled or confronted while in public. Following an incident where Nielsen was protested at a Mexican restaurant, The Washingtonian’s Jessica Sidman wrote that the culture of D.C. — a city of politicians — is changing.

“Encountering powerful and controversial people shopping for groceries, dining at restaurants, or hitting up SoulCycle has always been a normal facet of DC life,” Sidman wrote. “And for the most part, there’s an unspoken code that we allow them to go about their daily lives uninterrupted.”

As I wrote, the culture change isn’t only evident in the nation’s capital, as the Chicago and Louisville incidents demonstrate. When the daily lives of the politically powerful are interrupted — whether by a lone heckler or a group of protesters — and the inevitable story makes the social media rounds, the question of  “What happened to common courtesy?” quickly follows, much like today’s lament from Joe Scarborough.

But in the midst of our current administration, what this question tends to ignore are the factors that can drive the general level of contempt to such a boiling point. Days before Eric Trump was spit on, the deplorable conditions of a detention facility in Clint, Texas, became public after investigators spoke with nearly 50 children about their time in the facility.

Last night’s “lock him up” chants come as, according to polls from both Politico and the Washington Post, over half of Americans believe that Donald Trump should be impeached, and then also removed from office.

But as Salon’s Amanda Marcotte reported, the White House immediately hit back with a letter declaring that the House impeachment inquiry was, in its view, illegal and illegitimate, “and that the president is therefore under no obligation to comply with any subpoenas or other legal demands to cooperate.”

“The letter, ostensibly written by White House counsel Pat Cipollone, used language aping that of a legal document and presented vague constitutional claims, but make no mistake: The central point was simply to refute the constitutional right of Congress to impeach a president,” Marcotte wrote.

Essentially, Trump is positioning himself above the law. That’s a position that’s easy to take when walled away from your constituents in the White House, surrounded by enablers and illusions of “fake news,” but less so when confronted with a stadium full of citizens chanting for him to answer for his illegalities.