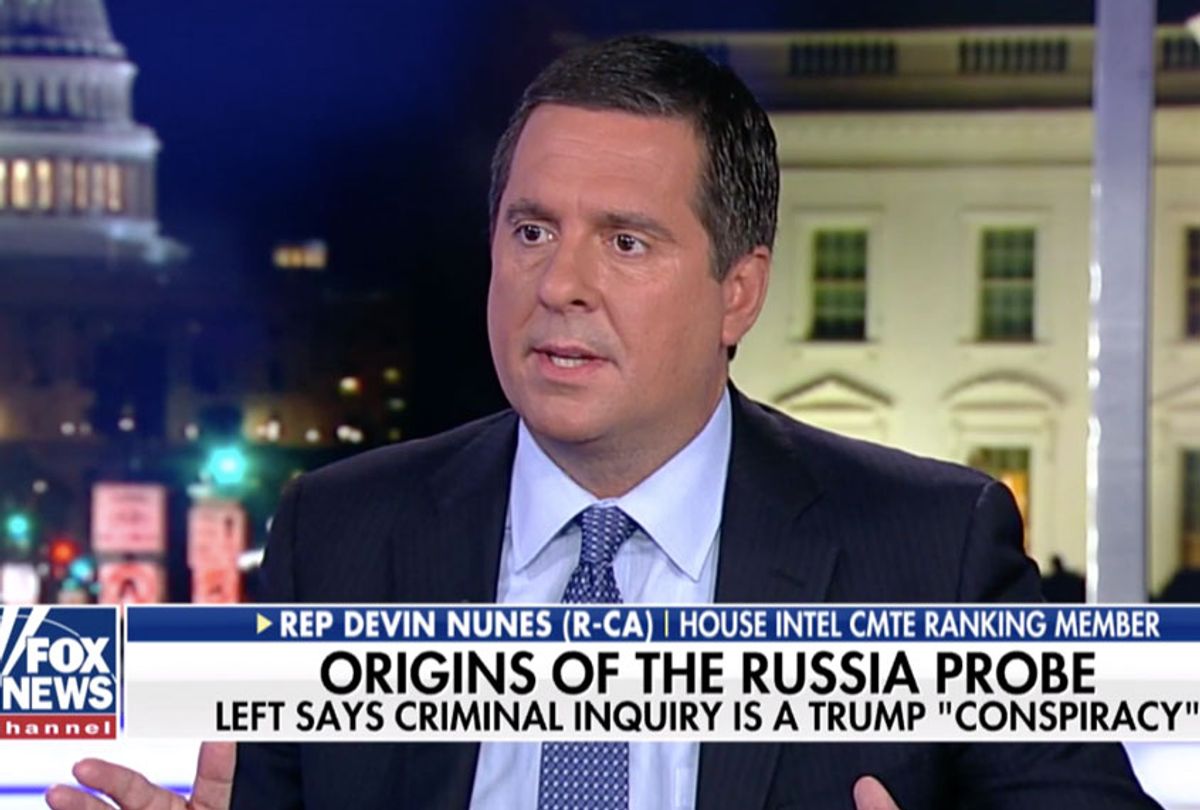 But Nunes did not stop there in his assault on the free press. The congressman, who is well-known for spouting conspiracy theories about the so-called "deep state," then likened reporters' pursuit of the truth to the work of hired hit men.

"When I walk down the halls, I have to continue to tell these reporters that 'Look, I’m not going to talk to you in this lifetime or the next,'" Nunes said. "Because these are not real reporters — they’re assassins. They’re assassins that are taking information from the Democrats on the Intelligence Committee.”

Carlson then suggested that these journalists were, in fact, “operatives” of the Democratic National Committee — an unfounded conspiracy theory in it of itself, despite his earlier agreement with Nunes that the Ukraine scandal was a conspiracy.

“We need a free and fair press, and that’s not what we have today,” Nunes told Carlson as he agreed with the Fox News host.

Nunes, who is currently the Republican Party’s ranking member on the House Intelligence Committee, incurred considerable controversy during his tenure as chairman there. In March 2017, he apologized for visiting the White House to discuss "incidentally collected" surveillance of Trump's election campaign.

The late Rep. Elijah Cummings, then the ranking Democrat on the House Committee on Oversight and Government Reform, called for an investigation of Nunes on the grounds that he had compromised his own inquiry.

"What he has done is he’s scuttled, and put a cloud over his own investigation, and he has become the subject — basically, he should be — of an investigation," Cummings told CNN. "It’s a real problem."

It later came out that shortly before the publicity performance with Nunes, Trump had informed the intelligence community of his intention to "mobilize to find something to justify the president’s tweet that he was being surveilled.”

During that same month, Nunes was secretly recorded telling a dinner of California Republican Party donors that "the Democrats don’t want an investigation on Russia. They want an independent commission. Why do they want an independent commission? Because they want to continue the narrative that Vladimir Putin and Donald Trump are best friends — and that’s the reason that he won, because Hillary Clinton would have never lost on her own. It had to be someone else’s fault."

Last year, Nunes became a major force pushing the #releasethememo hashtag. He and others claimed that there was a memorandum which discredited both the Steele dossier — and the entire Trump-Russia investigation. The memorandum was eventually released, but it did not in any way discredit the probe.

Nunes’ claims to Carlson about the Ukraine investigation being a “hoax” are inaccurate. A memorandum released by the White House reveals that Trump asked Ukrainian President Volodomyr Zelensky “to do us a favor” in their July 25 phone call, which took place at a time when the administration was withholding military aid appropriated by Congress. Acting White House chief of staff Mick Mulvaney later affirmed a quid pro quo, although he has since attempted to walk back those comments. Trump also asked for information about a DNC server during the controversial phone call.

You can watch Nunes' appearance on Fox News here: