Trump made a big show of Baghdadi killing, but his policies and rhetoric are fueling a spike in domestic terrorism 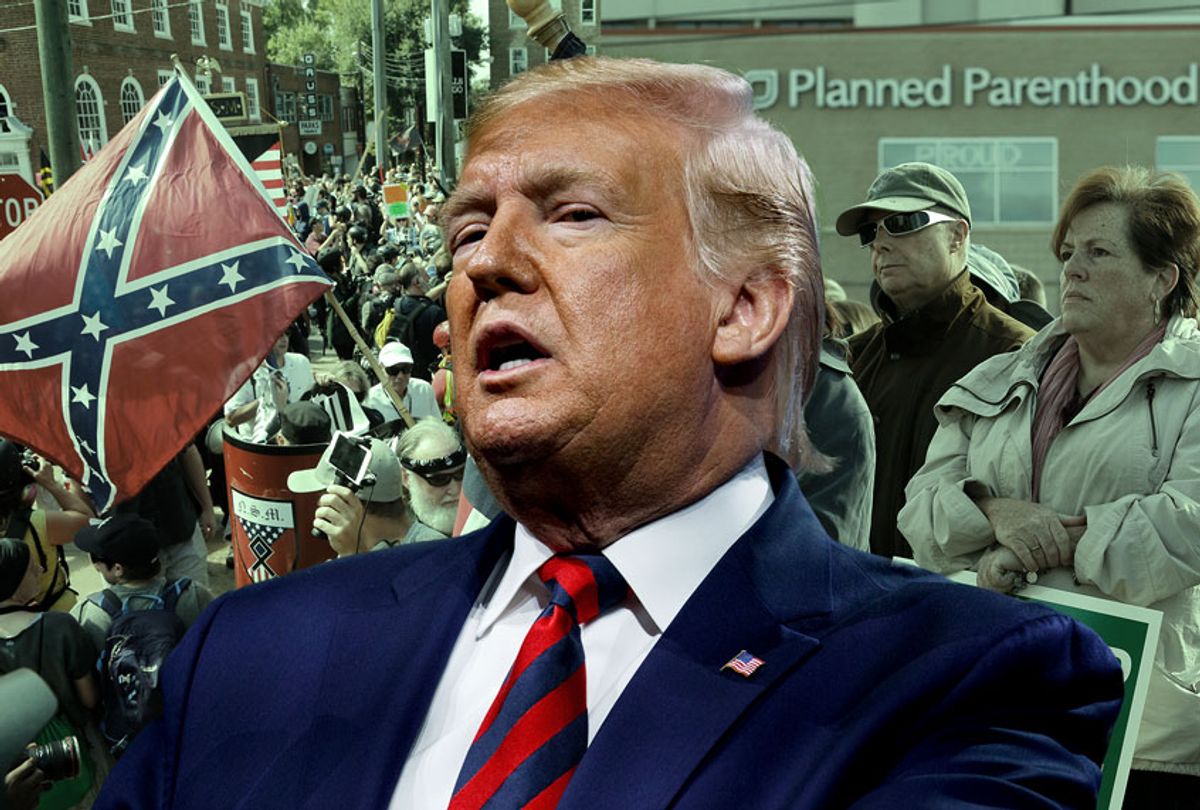 Donald Trump desperately wanted the death of ISIS leader Abu Bakr al-Baghdadi to be a personal triumph, one that would support his hopeless obsession with wiping away the legacy of Barack Obama. But Trump's big moment as a self-proclaimed enemy of terrorism was swiftly undermined by his own incompetence, after reports that Baghdadi was killed despite Trump's mishandling of the situation and afterTrump was booed and heckled at a World Series game in Washington.

But those aren't the only reasons to question Trump's credentials as a crusader against terrorism. The main one, in fact, is that Trump has been a boon to homegrown terrorism and other political violence, because his presence in the White House has inspired and empowered right-wing violence across the country. Shocking massacres in El Paso and Pittsburgh were fueled by anti-immigrant rhetoric not unlike the kind Trump spews, to cite the most prominent examples. But when you survey the larger situation in the country, the sobering truth is that right-wing extremists of all types are really feeling themselves in the age of Trump.

The Very Rev. Katherine Ragsdale, an Episcopal priest and interim head of the National Abortion Federation (NAF), told Salon she sees an "incitement to violence" and an "utter disregard for truth or consequences that has become normalized in a way that I haven't seen in the 35 years that I've been working in this movement."

NAF has been tracking anti-choice violence since 1977 and while there have always been "peaks and troughs," Ragsdale explained, the "peak is even spikier than it has been in the past." She attributes that to the fact that vicious lies about abortion providers, of the sort that once came only from the political fringe, are now coming directly from the president, as well as other prominent political figures.

The 2018 report showed a record number of instances of threats, harassment and violence against abortion clinics, beating the previous record that was set the year before. There's no reason to think that number will go down this year either: In August alone, there were three instances of men arrested for threatening to shoot up reproductive health clinics.

It's not just clinic workers that are living under the daily threat of right-wing violence. A recent report from the Government Accountability Office suggests that federal land employees are also in danger. Between 2013 and 2017, there were 360 threats and assaults on employees of agencies that manage federal lands. Such agencies have been the subject of an increasing vitriol from right-wing extremists, such as the group led by Ammon Bundy that occupied the Malheur National Wildlife Refuge in 2016, who object either to environmental regulations governing federal lands or, in many cases, to the idea of federal land ownership itself.

The GAO report doesn't make clear how much of this threatened or actual violence was the result of right-wing ideology, but a number of incidents — including stalking of federal officials, threats against a teenage girl for simply wearing a land agency T-shirt, and shots fired at employees working on federal land — suggest that extremist rhetoric is a factor. Trump himself has also validated this movement, by giving pardons to two men convicted of arson on federal lands.

When the House Natural Resources Committee held a hearing on this issue, the over-the-top reaction from right wing extremists on Facebook was a startling sign of how empowered these folks are feeling in the age of Trump. Ammon Bundy, the leader of the Malheur occupation, showed up in comments to defend the assaults and threats as protests against of federal agents who have "stollen [sic] the West" and to declare that a committee witness "helped murder a good man," a reference to LaVoy Finicum, an armed Malheur occupier who was shot by federal officials after refusing to surrender.

Of course, the most serious threat of domestic terrorism in the age of Trump comes from white nationalists, as evidenced by the killing of Heather Heyer during the Charlottesville riots and the shootings in El Paso and Pittsburgh. Hate crimes have risen steadily during Trump's time in the political spotlight, which is no surprise, as his main political tactic from the day he announced his presidential candidacy in 2015 has been racist demagoguery.

This rise in hate crimes coincides with an continuing, long-term overall decrease in violent crime, meaning that, as a percentage of overall crime, political crime is spiking. The nature of the hate crimes is shifting as well, with more of it motivated by the kind of white nationalism that was once confined to the far right and is now associated with Trump and Fox News.

But because Trump adamantly denies the threat of white supremacist violence — going so far as to say that some of the neo-Nazi marchers in Charlottesville were "very fine people" — his administration has made little or no effort to counter this growing threat. It was only after the El Paso shooting that the Department of Homeland Security even admitted that white supremacist violence was a genuine threat, even though FBI Director Christopher Wray had recently testified to Congress that most domestic terrorism arrests were related to white supremacist ideology.

There are two common themes across all these forms of political violence and domestic terrorism: It's right-wing violence and it's being officially tolerated, if not encouraged, in ways both subtle and overt. Abortion clinic violence is rising at the same time Trump is falsely accusing doctors of delivering babies so they can be murdered later. Trump's pardons of men who committed arson on federal lands sends a signal that such violence is welcomed by the administration. Of course, the nonstop stream of racist vitriol from the White House has encouraged white nationalist violence that has led to mass murder.

So perhaps it's  no surprise that Trump's triumphant claims to be a fighter against terrorism fell flat. When you look at the big picture, it doesn't seem that Trump is an enemy of terrorism at all.