Obama's chief of staff was front and center during the Osama bin Laden raid, but Mulvaney was sitting at home 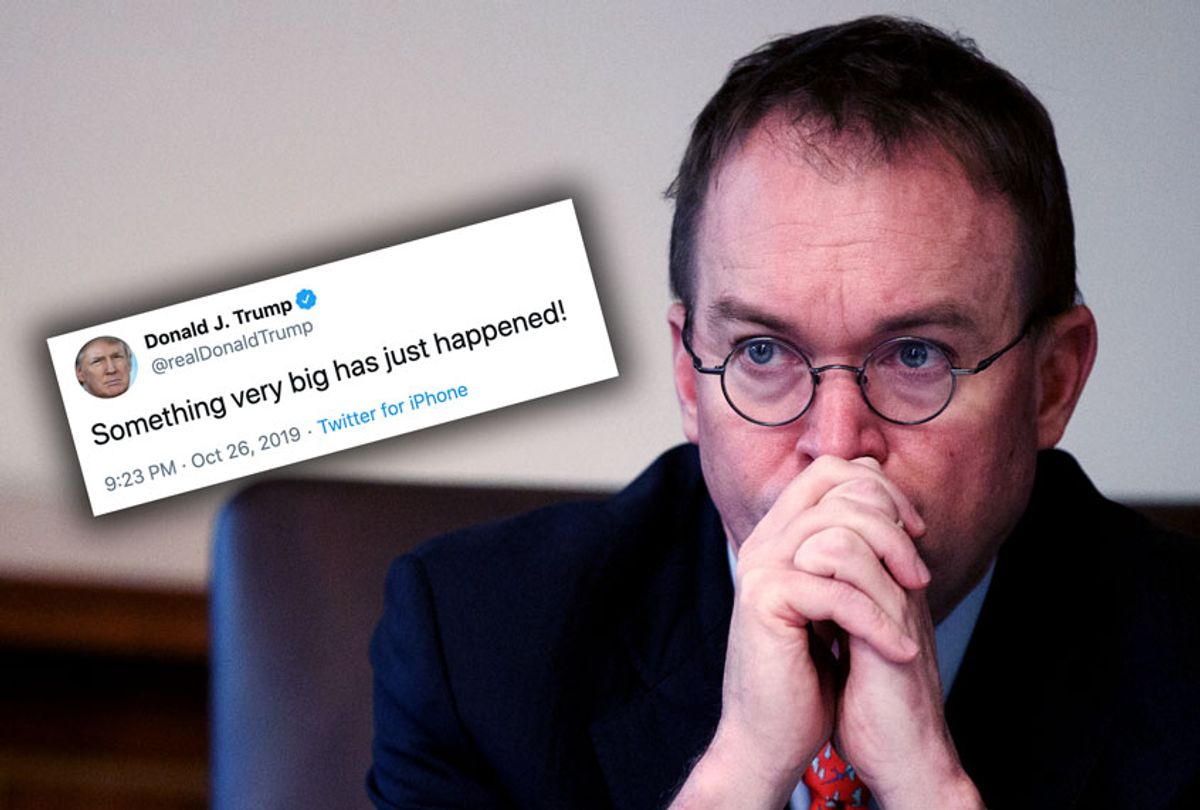 After being shut out of the planning for the military raid that killed ISIS leader Abu Bakr al-Baghdadi, acting White House chief of staff Mick Mulvaney was reportedly left to learn about the the operation from President Donald Trump’s tweet.

Mulvaney was at home in South Carolina when he learned that “something very big has just happened” from Trump’s tweet Saturday. He was briefed on the raid later that night after the operation was already underway, NBC News reported, citing five current and former senior administration officials.

The report, which comes two weeks after Mulvaney admitted to a quid pro quo on Ukraine before attempting to walk his comments back, calls into question Mulvaney’s role in the White House. Photos released after the raid that killed Al-Qaida leader Osama bin Laden showed then-chief of staff Bill Daley standing next to former President Barack Obama in the Situation Room as he monitored the raid.

Andrew Card, who served as chief of staff to President George W. Bush, told NBC News that it was incomprehensible that the president would shut out his chief of staff, who is typically tasked with coordinating national security meetings and the administration’s response following the raid.

Chris Whipple, the author of “The Gatekeepers: How the White House Chiefs of Staff Define Every Presidency,” told the network that Mulvaney’s exclusion was “really unprecedented.”

“To me, it’s just a symptom of a total breakdown in the White House functions,” he said. “Only in a completely dysfunctional White House would the White House chief of staff be out of the loop on something so significant.”

Mulvaney took on the job in an acting capacity and has remained the “acting” chief of staff for ten months. Mulvaney is serving in the role while pulling double-duty as the director of the White House Office of Management and Budget. When asked whether Trump still has confidence in Mulvaney, White House spokesman Hogan Gidley declined to answer.

“When the president doesn’t have confidence in someone, you’ll know it,” Gidley told NBC.

Mulvaney came under fire from members of his own party after he appeared to undercut Trump’s entire defense strategy in the impeachment inquiry by admitting that there was a quid pro quo with Ukraine. Mulvaney later tried to walk it back but a source close to Trump told NBC that Mulvaney was “cooked” after that performance.

“Mick self-immolated,” the source said. “He got up there, poured lighter fluid on himself and lit the match.”

Congressional leaders have also complained that Trump kept them in the dark on the raid until after it happened despite it being custom to brief the Gang of 8, which includes the bipartisan leaders of both chambers and intelligence committees. Speaker of the House Nancy Pelosi and Senate Minority Leader Chuck Schumer said they were kept in the dark, as were Senate Majority Leader Mitch McConnell and House Minority Leader Kevin McCarthy.

Pelosi hit out at Trump for notifying the Russian military of the raid before informing Congress.

“The House must be briefed on this raid,” Pelosi said in a statement, “which the Russians but not top congressional leadership were notified of in advance.”