"You don't need a chief of staff's idiotic interpretation of things," Trump loyalist Sean Hannity said on the radio 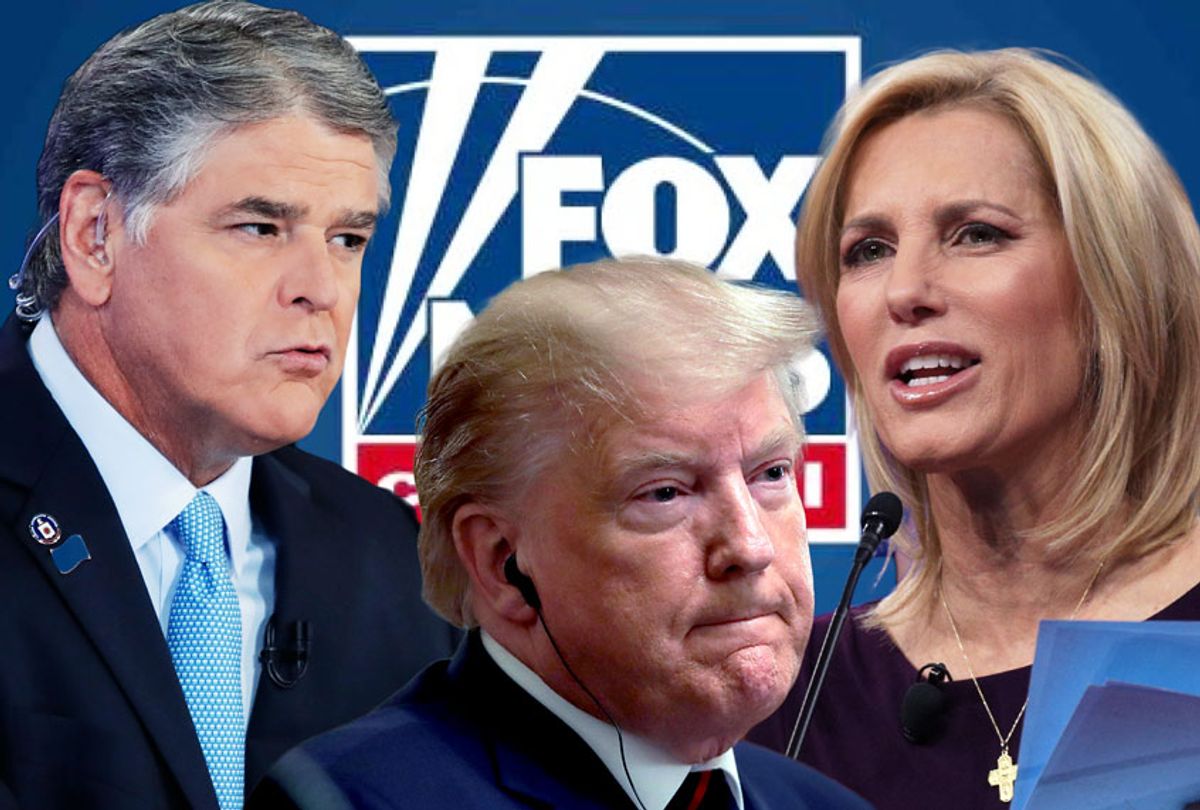 Several Fox News hosts embarked on a large cleanup effort Thursday night in the hours after acting White House chief of staff Mick Mulvaney acknowledged that President Donald Trump withheld millions in military aid to Ukraine in an attempt to pressure the country to launch an investigation that could benefit him politically.

"I just think half these people — Republicans, too. What is Mulvaney even talking about?" Fox News host Sean Hannity, who also acts as an informal adviser to the president, said on his radio show. "I just think he's dumb. I really do. I don't even think he knows what he's talking about. That's my take on it."

"I guess the truth is complicated. This is what — you know, this is why, I think, some of these people are so stupid . . . You don't need a chief of staff's idiotic interpretation of things," he added.

The "Ingraham Angle" host, who is also one of the president's most outspoken media defenders, argued that Mulvaney's remarks should not be taken seriously because he is not a lawyer. (In fact, Mulvaney is a lawyer.)

"I got to say, though, because we're all lawyers here. There's a reason [Attorney General] Bill Barr doesn't do a lot of press conferences, but he — he would know how to answer those questions," she said. "I'm not piling on Mulvaney, I don't want to do that. I don't think it's helpful."

"But when you have a legal issue before a lot of people who aren't lawyers, the last thing you want to do is try to get out there and say a whole bunch of things really fast and then say, 'Well, the context was, and going back and the reach back was,' — and then there's not enough of a pause between one thought and another, and then they could say, 'Aha, see, you did,' and then have to go back and clean it up afterward," she continued.

Earlier on Thursday, Mulvaney told reporters that Trump sat on nearly $400 million in military aid to Ukraine to pressure the government in Kyiv to investigate an unsubstantiated conspiracy theory that Ukraine, not Russia, was responsible for hacking the Democratic National Committee's computer server during the 2016 election. The theory could bolster Trump's claims that he clinched the presidency without Russia's help.

"Did [Trump] also mention to me in the past the corruption related to the DNC server?" Mulvaney said. "Absolutely, no question about that. But that's it, and that's why we held up the money."

Mulvaney's remarks, which he walked back later in the day, contradicted Trump's repeated denials of a quid pro quo.

The comments, which lawmakers across the aisle admitted were damaging to Trump, came as House Democrats are escalating their impeachment inquiry focused on whether Trump had pressured Ukraine for his personal and political gain.

"You don't hold up foreign aid that we had previously appropriated for a political initiative," GOP Sen. Lisa Murkowski of Alaska told reporters Thursday. "Period."

The Democratic-led impeachment inquiry is focused on a July 25 call in which Trump asked Ukrainian President Volodymyr Zelensky to do him a "favor" and "find out what happened" with a DNC computer server that had been hacked by Russians during the 2016 presidential campaign, according to a summary of the call released by the White House.

Trump has repeatedly questioned and attacked the U.S. intelligence community's findings that the Russians hacked and disseminated emails from the Democratic National Committee and Hillary Clinton to boost his campaign. The Department of Justice is investigating the origins of the investigation into Russian interference in the 2016 election.

"Mick Mulvaney today on national TV says yes, there was a quid pro quo essentially on the DNC conspiracy theory investigation. That is all very damning for the President of the United States," Rep. Ted Lieu, D-Calif., said Thursday.

Democrats are also investigating another request the president made on that now-infamous call — that Ukraine investigate former Vice President Joe Biden and his son, Hunter, who served on the board of a Ukrainian energy company that came under scrutiny for possible abuse of power and unlawful enrichment. There is no evidence of wrongdoing by either Joe or Hunter Biden.