"You don't hold up foreign aid that we had appropriated for a political initiative," GOP Sen. Lisa Murkowski says 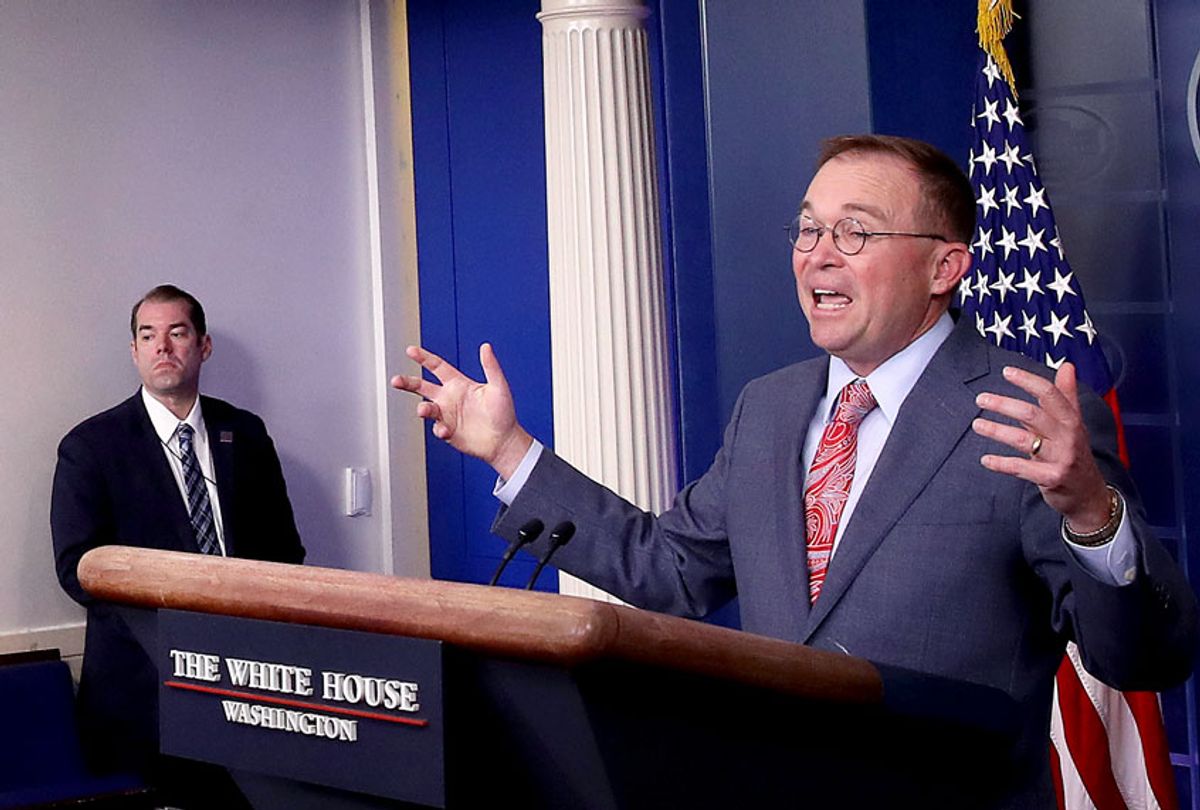 Acting White House chief of staff Mick Mulvaney revealed at a press conference Thursday that President Donald Trump had withheld nearly $400 million in military aid to Ukraine in order to pressure the country to launch an investigation that could benefit him politically.

Speaking to journalists at a combative press briefing, Mulvaney admitted that Trump sat on aid appropriated by Congress in order to pressure the government in Kyiv to investigate an unsubstantiated conspiracy theory that Ukraine — not Russia — was responsible for hacking the Democratic National Committee's server during the 2016 election. The theory could bolster Trump's claims that he clinched the presidency without Russia's help.

"Did [Trump] also mention to me in the past the corruption related to the DNC server?" Mulvaney asked. "Absolutely, no question about that. But that's it — and that's why we held up the money."

Mulvaney's admission, which he walked back later in the day, contradicted Trump's repeated denials of a quid pro quo.

The comments, which lawmakers across the aisle admitted were damaging to Trump, came as House Democrats escalate their impeachment inquiry focused on whether Trump had pressured Ukraine for his personal and political benefit.

"You don't hold up foreign aid that we had previously appropriated for a political initiative," GOP Sen. Lisa Murkowski of Alaska told reporters. "Period."

GOP Rep. Francis Rooney of Florida told CNN Mulvaney's admission is "troubling" and "not a good thing" to do that in connection "with threatening foreign leaders."

He said he would not rule out potentially supporting the Democratic-led effort to impeach the president.

"I'm not going to say anything about that until all the facts are in," he said. "I remember too many people saying, 'Oh, this is a witch hunt against Richard Nixon,' and come to find out it wasn't a witch hunt."

Over the past few weeks, Republicans in Congress have defended the president, claiming there was no quid pro quo between Trump and Ukraine.

Rep. Mark Meadows, R-N.C., told reporters Thursday that he had not yet seen Mulvaney's comments.

"To date, every single witness, every single fact has not supported any pause or holdup on foreign aid being attached to any conditions," he said.

Rep. Mac Thornberry of Texas, the top Republican on the House Armed Services Committee, criticized the president's conduct on Thursday, telling CNN that it was "inappropriate" but not "impeachable."

The impeachment investigation is focused on a July 25 call in which Trump solicited Ukrainian President Volodymyr Zelensky to do him a "favor" and "find out what happened" with the DNC computer server hacked by Russians during the 2016 presidential campaign, according to a summary of the call released by the White House.

Trump has repeatedly questioned and attacked the U.S. intelligence community's findings that the Russians hacked and disseminated emails from the Democratic National Committee and Hillary Clinton in order to boost his campaign. The Department of Justice is investigating the origins of the investigation into Russian interference in the 2016 election.

Democrats are also investigating another request the president made on that now-infamous call — that Ukraine investigate former Vice President Joe Biden and his son, Hunter, who served on the board of a Ukrainian energy company that came under scrutiny for possible abuse of power and unlawful enrichment. There is no evidence of wrongdoing by either Joe or Hunter Biden.

Democrats have alleged that Trump abused his office for personal and political gain. They claim that Mulvaney's comments about a quid pro quo with Ukraine are further proof the president violated his oath of office to solicit interference in the 2020 election, an allegation which was first detailed in a whistleblower complaint released last month that blew open the scandal and prompted House Democrats to launch an official impeachment inquiry.

House Intelligence Committee Chairman Adam Schiff, D-Calif., said Thursday that Mulvaney's comments have made things "much worse" for the president.

"The idea that vital military systems would be withheld for such a patently political reason —  for the reason of serving the president's reelection campaign — is a phenomenal breach of the president's duty to defend our national security," Schiff said.

"Mick Mulvaney today on national TV says, 'Yes, there was a quid pro quo essentially on the DNC conspiracy theory investigation,'" Lieu said Thursday. "That is all very damning for the president of the United States."