Trump Jr. complains of alleged double-standard to Sean Hannity: “I wish my name was Hunter Biden” 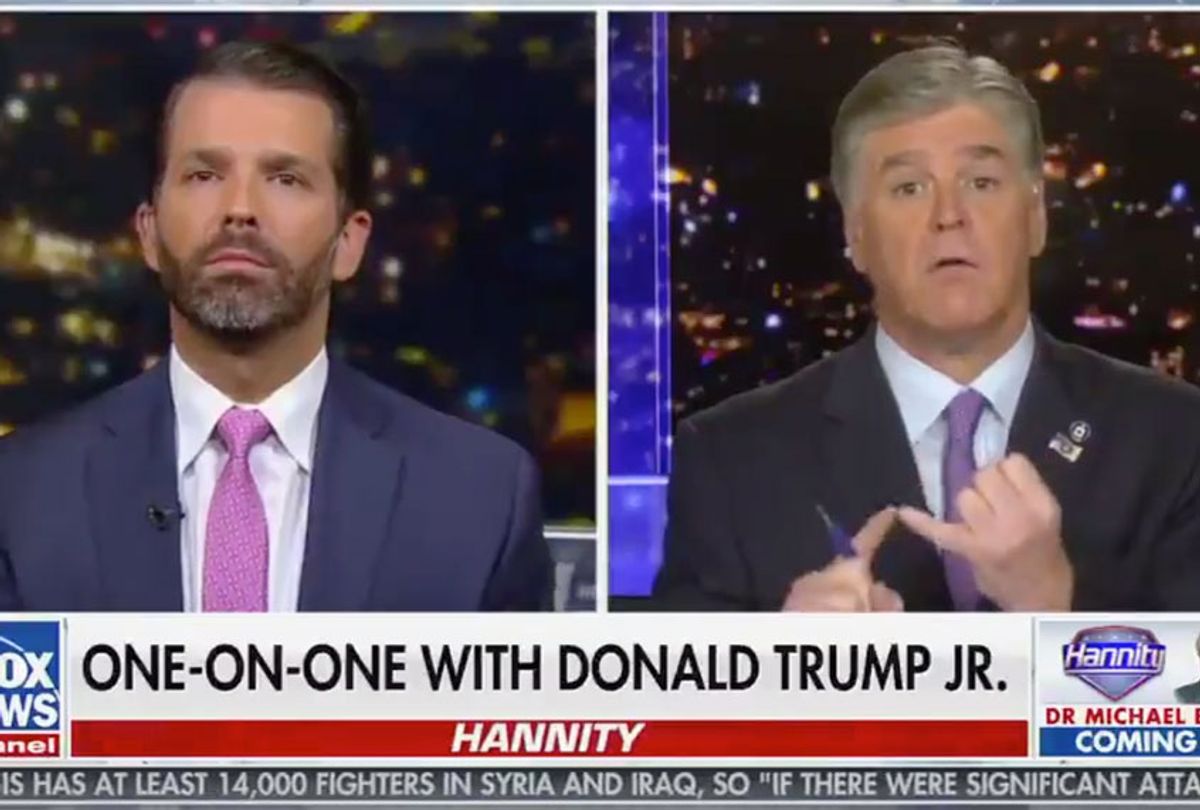 Despite overseeing multiple foreign business interests which have continued into his father’s presidency, Donald Trump Jr. went on Sean Hannity’s Fox News show to criticize the son of former Vice President Joe Biden over his own foreign business dealings — and promote debunked conspiracy theories about his father’s Democratic rival in the process.

"I wish my name was Hunter Biden,” Don Jr. told Hannity. “I could go abroad and make millions off my father's presidency. I'd be a really rich guy. It would be incredible. But because my name is Trump, if I take $1.5 dollars from China — not $1.5 billion, like Hunter, but $1.5 dollars — their heads would explode.”

Because he has pursued high-profile business deals in India, Indonesia and Scotland since his father became president, Don Jr.’s repeated criticisms of Biden’s son have raised eyebrows.

Don Jr. said in a statement to The New York Times that his situation was different, because “when my father became president, our family stopped doing international business deals.” The Trump Organization considers the deals in India, Indonesia and Scotland to be exceptions, as it built upon deals already in the works prior to the 2016 election.

There is no evidence that Hunter Biden engaged in any misconduct in either Ukraine or China. Although he was employed by a Ukrainian gas company during his father’s vice presidency, there is no indication that he was ever accused of a crime or that his work for Burisma played any role in the resignation of prosecutor Viktor Shokin. Shokin was pressured into resigning by Biden and other foreign leaders, because he was perceived as not doing enough to fight corruption in Ukraine.

There is also no evidence that Hunter Biden ever accepted $1.5 billion from China during his father’s vice presidency, even though the president has claimed as much.

Acting White House chief of staff Mick Mulvaney admitted earlier this month that military aid appropriated by Congress for Ukraine was withheld in a quid pro quo. He has since attempted to walk back that claim.

The Trumps’ focus on the Bidens is likely due to the fact that for much of the 2020 presidential election cycle, the former vice president has been the frontrunner for the Democratic nomination in national polls. And President Trump’s attempts to dig up dirt on Biden could soon result in his impeachment in the Democratic-controlled House of Representatives, which today set rules for its formal inquiry. However, his forcible removal from office is less likely to pass by a two-thirds vote in the Republican-controlled Senate.