What's new on Netflix in November, from "The Crown" to "The Irishman"

From Dolly Parton and "Green Eggs and Ham" to a damning docuseries and disembodied hand, it's an eclectic mix 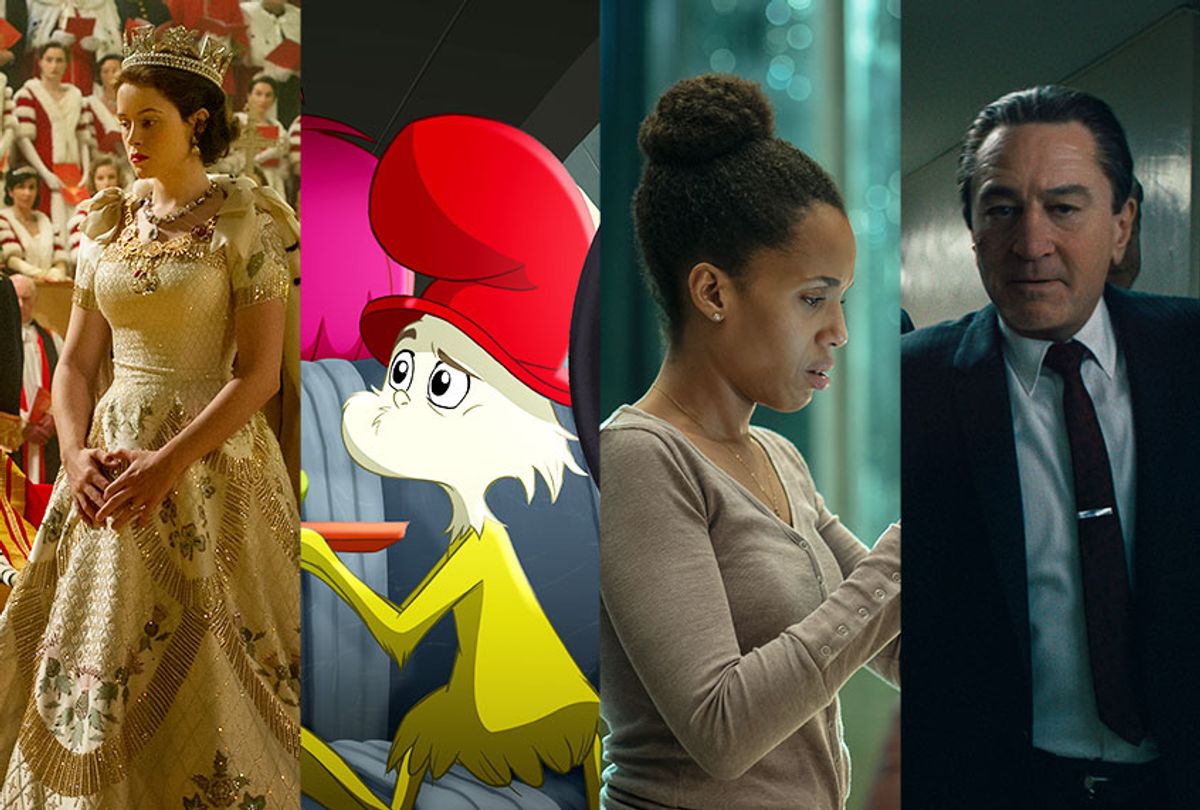 November promises to be a good month for Netflix — from big blockbuster movies like Martin Scorsese’s “The Irishman” to indie animated films like “I Lost My Body.” Between those, there are some fascinating documentaries that present a different side of true crime, including a deep-dive into crimes committed by the founder of hot yoga. If you’re in the Christmas spirit, “Klaus” looks promising; if you’re not quite there, but still want some family-friendly fun, “Green Eggs & Ham” would be the way to go.

Based on the 2018 Broadway play of the same name, the movie “American Son” takes place on a single night in a single space: the drab waiting room of a police precinct on the night a teenage boy has gone missing. His parents, Kendra (Kerry Washington) and Scott (Steven Pasquale), are anxiously waiting to hear what has happened to him. But while they do, they have to contend with the casually racist rookie officer on duty (Jeremy Jordan), their own fears, and memories of their rocky marriage.

In this adaptation of Shakespeare’s “Henriad,” Timothée Chalamet plays the titular party boy-turned-king. After ascending to the throne, Henry must navigate the tumultuous political climate his father left behind and the diplomatic complexities of dealing with the Dauphin of France (Robert Pattinson) while also feeling a certain pull towards his past life — including his relationship with his closest friend, the aging alcoholic knight, John Falstaff (Joel Edgerton).

A Cleveland grandfather stands accused of an Earth-shattering crime — being the infamous Nazi concentration camp guard known as Ivan the Terrible. This five-part documentary series tells the real-life story of Ukranian immigrant John Demjanjuk's 35-year legal saga, and attempts to answer whether he was unjustly persecuted or was, indeed, held accountable for egregious war crimes.

The premise of Season 1 of the “The End of the F***ing World,” Netflix’s dark-comedy breakout hit, was simple: sociopathic teenager James (Alex Lawther) agrees to run off with his rebellious classmate, Alyssa (Alex Lawther), with the intent of eventually killing her. Mishaps ensue, but somewhere along the way, the two form a bond.

In Season 2, set two years after James and Alyssa's initial road trip, a woman obsessed with a man they had run into during their earlier spree is released from prison.

In this animated series adaptation of the beloved Dr. Seuss book, “Green Eggs and Ham,” bubbly Sam (voiced by Adam Devine) and curmudgeonly Guy (Michael Douglas) — who are complete opposites in nearly every way — end up on an adventure-filled roadtrip in order to save an endangered animal. Along the way, they come to appreciate new things like friendship and loyalty, and a certain, famous dish. Joining in the vocal shenanigans are Keegan-Michael Key, Diane Keaton, Ilana Glazer, Eddie Izzard, Daveed Diggs, and more.

In 1989 Tokyo, we meet an expat named Lucy Fly (Alicia Vikander), who moved to the city to escape a traumatic past and immersed herself completely in Japanese culture. Her friend, Lily Bridges (Riley Keough) — a fellow expat who just kind of ended up in Japan — has gone missing. Lucy was the last to see her and, in this mystery flick (with definite pschy-noir vibes), it’s unclear if she was the killer or if, in fact, Lily was actually murdered.

Glam-punk band Nasty Cherry made a splash on Instagram earlier this year when they made a post announcing themselves: “Hi. We’re Nasty Cherry and we’re the best band of 2019. Spam us with cherrys if u wanna be in our gang.” Insert copious cherry emojis. Now fans and newcomers alike will get a peek behind the curtain to see how the group was formed by pop star Charli XCX. According to a release by Netflix, the six-part series “follows the women as they navigate a new age of music, making up their own rules as they go and blowing up Instagram feeds in the process.”

I know, I know — Halloween literally just ended. And while I’m not ready to swap my plastic bat decorations for a Christmas tree, “Klaus” looks really cute. Directed by Sergio Pablos, best known as the creator of the “Despicable Me” franchise, the 2-D animated film serves as an update to the original myth of Santa Claus. It centers on Jasper (voiced by Jason Schwartzman), who happens to be the absolute worst student at the postal academy. As such, he’s stationed on an island above the Arctic Circle, where there’s not a whole lot of mail, mitigating his opportunities for error. There, he meets a mysterious carpenter (J.K. Simmons) who lives in a cabin and makes homemade toys. The friendship between the two men may be enough to inspire cheer among the island’s feuding locals.

Here at Salon, we are definite fans of “The Crown,” which chronicles the life of Queen Elizabeth II from the 1940s to modern times. As television critic Melanie McFarland wrote of the first season in 2016, “outstanding performances and a stupendous script make Netflix's royal drama worth slowly savoring.” In the third season, which is out later this month, Olivia Coleman replaces Claire Foy as Queen, and the new trailer signals tumultuous political times.

“In days like today you ask yourself, in the time I’ve been on the throne what have I actually achieved?” Queen Elizabeth remarks. “This country was still great when I came to the throne. All that’s happened on my watch is the place has fallen apart.”

This Netflix original documentary examines the rise and fall of Bikram Choudhury, the controversial founder of hot yoga. After moving to Beverly Hills in the 1970s, Choudhury quickly attracted a celebrity clientele, and built up a massive amount of wealth. But then six decades later, numerous allegations of sexual assault and abuse, as well as stories of a cult-like training atmosphere, came to light. Lawsuits began to mount and former clients and devoted followers are still grappling with who Choudhury was — both inside and outside the studio.

As Salon’s Mary Elizabeth Williams wrote earlier this week, “everything's coming up Dolly now,” from a new podcast to this Netflix anthology series in which each of the eight episodes center on one of the singer’s most iconic songs. It kicks off with an episode titled “Jolene,” in which the flirtatious title character (played by Julianne Hough) wants to escape her small Georgia hometown to become a singer-songwriter. Parton will be in each of the episodes — either as a character or introducing the story.

Of all the content coming to Netflix in November, “The Irishman” may have been the most buzzed about. Starring Robert De Niro, Al Pacino and Joe Pesci, this Martin Scorsese-directed mob epic follows World War II veteran Frank Sheeran, who was a hustler and hitman who worked alongside some of the most notorious members of organized crime in the 20th century. It also taps into one of the greatest unsolved mysteries in this realm: the disappearance of legendary union boss Jimmy Hoffa.

In this animated short, a severed hand escapes from a Parisian laboratory, seeking to reconnect with the boy to whom it was once attached. This is the premise of “I Lost My Body,” and while it sounds like it could veer into camp or psychological horror, the animated film has been recognized by critics as a sweet, soul-affirming work of visual poetry that touches on young love and tenuous childhood memories.

And here is a full schedule of everything coming this month:

"The End of the F***ing World": Season 2
"Seth Meyers: Lobby Baby"
"She-Ra and the Princesses of Power": Season 4
"Tune in for Love"
"Undercover Brother 2"

"The Body Remembers When the World Broke Open"

"The Knight Before Christmas"
"Mortel"

"Holiday Rush"
"John Crist: I Ain't Praying For That"
"Merry Happy Whatever"
"Mytho"

"Atlantics"
"Chip and Potato": Season 2
"I Lost My Body"
"La Reina del Sur": Season 2
"The Movies That Made Us"
"Sugar Rush Christmas"