With a new podcast, "Dolly Parton's America," and the upcoming Netflix series "Heartstrings," Dolly is everywhere 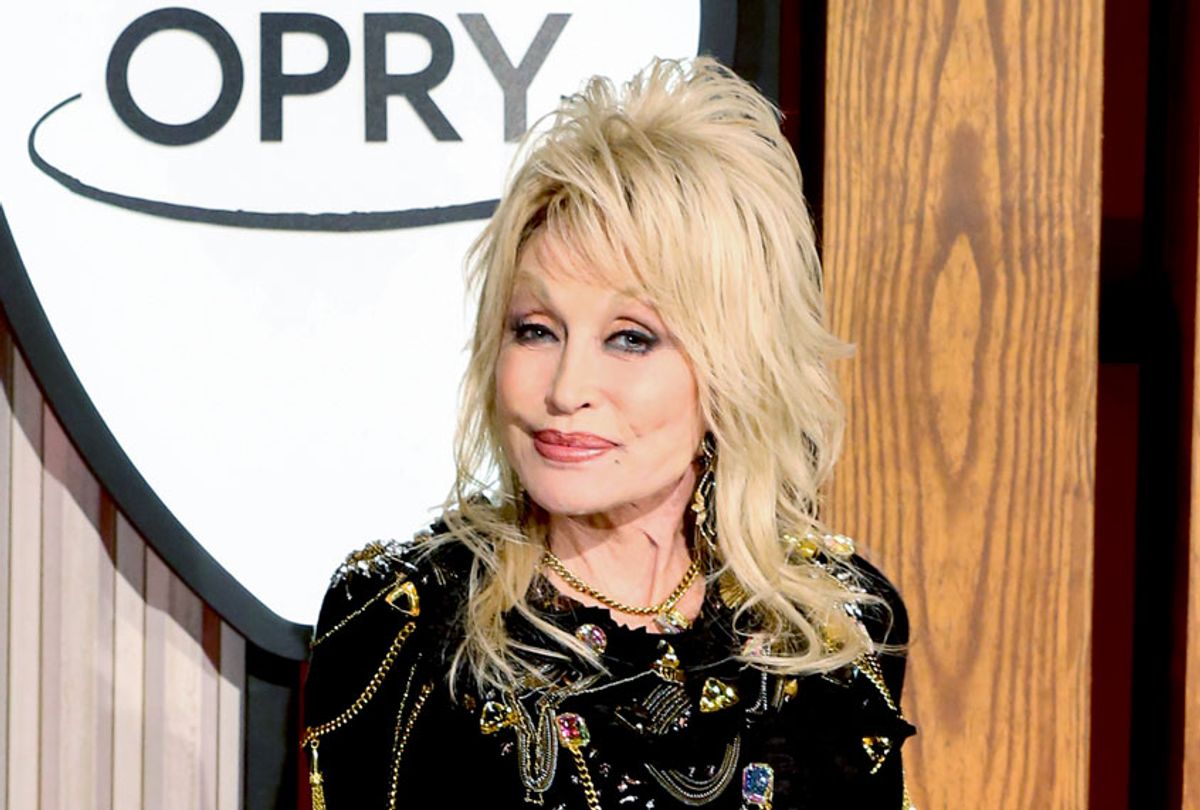 In an increasingly polarized world, the things we all agree on have dwindled down to an infinitesimal few. At my current count, I’d put it at: dogs, pizza and Miss Dolly Parton. If every Confederate monument in America were replaced with a statue of Dolly, we could end the controversy about them right now. If her face were on our $10 bills, we could instantly boost the economy. And if we all just listened to a little Dolly every day, you damn well know we’d all be better people. For over 50 years, she has been a national treasure. But it seems fitting now that at this particularly exhausting moment in time, we should find ourselves in the throes of a Dollyssance.

Earlier this month, Jad Abumrad (WNYC Studios and “Radiolab") launched “Dolly Parton’s America,” a nine-part exploration into the life and career of the legendary multi-hyphenate, featuring plenty of straight talk from Parton herself. On Nov. 22, Netflix will debut “Dolly Parton's Heartstrings,” an anthology series based on the music of, executive produced by, and co-starring the legend herself. Although she's never left us, somehow, her magnified appearance this fall makes it clear how much she’s needed more than ever.

In the earliest moments of the premiere episode of “Dolly Parton’s America,” Nashville native Abumrad describes his own come-to-Dolly moment, when he went to see her perform on her 2016 Pure and Simple tour. In the midst of one of the ugliest political campaigns in American history, here was a multiracial crowd of church ladies and drag queens, cowboys and children: one nation, under Dolly. Do you want to know how a lady from a big family and a small town gets to that place? She earns it.

Dolly Parton is, quantifiably, one of the most loved personalities in the world. She's also a deceptively complex American figure. On a superficial level, she’s a twangy blonde with a wig collection to rival RuPaul, a body that defies the laws of physics and a proudly gaudy sartorial aesthetic. “It costs a lot of money to look this cheap,” she’s famously explained. But you don’t have to look very far under the rhinestones to see that she’s one our greatest American songwriters, a virtuoso musician, an actress, an entrepreneur, a philanthropist and what your mom used to refer to as just plain good people. Her larger-than-life persona makes her a great entertainer. Her intelligence and authenticity make her an icon.

Growing up one of 12 siblings in Tennessee’s Great Smoky Mountains, Dolly began playing music in childhood. And from a young age, Parton demonstrated not just a knack for a beautiful melody, but a talent for stories of suffering — especially the suffering of women. As “Dolly Parton’s America” explores in its first episode, many of Parton’s self-described “sad-ass” early songs soulfully describe the experience of being poor and female and abandoned. The lyrics of “The Bridge” offer the last words of a pregnant woman about to jump to her death, on the spot she first kissed the lover who deserted her. “Daddy Come and Get Me” tells the tale of a woman locked up an asylum by her cheating husband. It was based on the story of a member of Parton’s own family. “He said that I was crazy,” the narrator laments, “but he just put me in here to get me out of his way.” That is some next-level "madwoman in the attic, Charlotte Perkins Gilman, put this on your feminist literature curriculum" testimony right there.

Revisiting Parton’s “sad-ass” song canon recently, I found myself remembering the period in my own childhood when a neighbor friend and I would play “Me and Little Andy” (wherein an impoverished, abandoned little girl and her dog die) over and over until we had sufficiently exhausted ourselves crying. As a commenter on one online music forum puts it, “Her early albums had at least one Dead Baby song.” Songs written by the woman who also established one of America’s most popular theme parks! But Dolly’s most famous sad-ass song wasn’t about death or even romance. It was, in essence, about a business partnership.

Parton came up through the ranks very much a man’s world, the pretty girl singer who found success in the '60s via Porter Wagoner’s hugely popular television show. Yet she was always the driving force in her own story — an ambitious, brilliant artist who, when it was time to strike out from her mentor for a full solo career, wrote down her feelings and turned them into a farewell song. Think about the most poignant rite of passage ever in your life and every beautiful, sad emotion that came with it. Did you write “I Will Always Love You” about it? Well, she did, and that’s why she’s Dolly Parton.

Dolly, the icon, is an institution. She’s an industry whose main product is making people happy. When gathered together, Dolly fans present an exuberance that emulates their sassy, flashy role model. But her magic is that all her exalted joy is suffused with the strength that only comes from sorrow. She reaches us because she writes so often from the perspective of the outsider, and that’s a condition we all can understand, cowboys and drag queens alike.  She’s the insecure woman begging her beautiful rival not take her man. She’s the proud, bullied child wrapped in a coat sewn from rags. She’s the seeker, a “sinful creature” searching for redemption. She’s a beleaguered worker who knows she’s “just a step on the boss man’s ladder.” Dolly articulates the human experience with supreme craftsmanship; she is the embodiment of her “Steel Magnolias” character Truvy, insisting that “nobody cries alone in my presence.”

Beyond the beacon of consolation, beyond the celebratory joy of survival, Dolly’s status as full blown hero is cemented by her supreme grace. When an embittered Porter Wagoner sued his star protégé for breach of contract, she simply settled out of court. When he fell on hard times later, she bought his songwriting catalogue and then gave it back to him, because, as she recalls on “Dolly Parton’s America, “I wanted his kids to have it. That was one of my gifts thanking him.”

When the scientists behind the world’s first cloned sheep named her Dolly — because she sprang from a mammary gland cell, GET IT? — Parton laughed it off by inviting her woolly namesake to visit Dollywood. And when she wanted to honor her father, who had to quit school to support his family and never learned to read, she started her Imagination Library. Since 1995, it’s given away over 100 million books to children around the world. Those are the actions of a person whose seat of power comes from a place of profound compassion.

There’s a pervasive sentiment in our culture that forgiveness is for the weak and sweetness is for losers. But who really wants to believe that’s true, deep down? Dolly is adored because, for all but the most churlish among us, she shines a light that says that our greatness lies within our hurt and pain and delight and our wisdom and our kindness. That’s who Dolly Parton is. A gentle soul. A total boss. In Dolly we trust, because, as she said in one of her earliest hits, “This dumb blonde is nobody’s fool.”