Why Trump's consumption of "some of the worst-quality foods" is worrisome, according to Dr. Bandy Lee 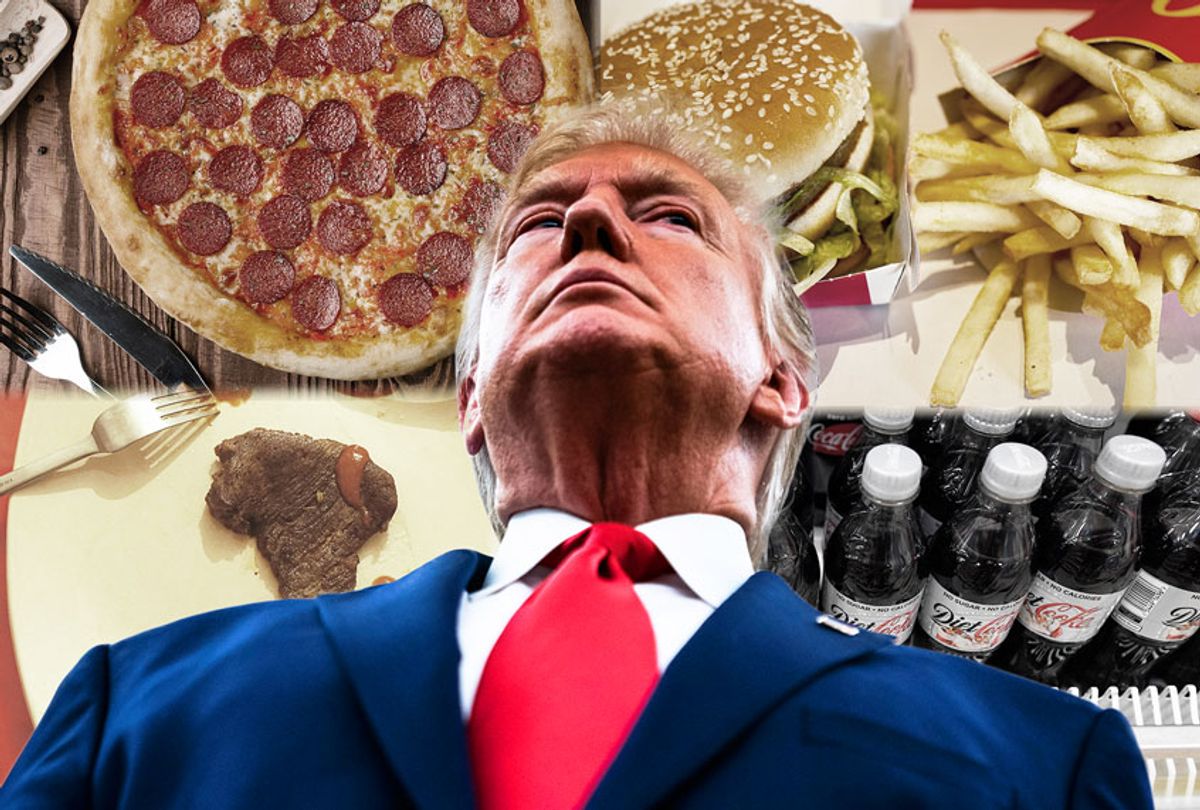 President Donald Trump's well-documented eating habits are far from what a nutritionist would deem ideal. The most powerful man in the world often skips breakfast. When he does eat the most important meal of the day, he opts for bacon, McDonald's Egg McMuffins or "made in the USA" cereals high in sugar.

When Trump visits McDonald's for lunch or dinner, his go-to order for one meal ⁠— two Big Macs, two Filet-O-Fish and a chocolate shake ⁠— clocks in at 2,390 calories. He might chase that with up to 12 Diet Cokes a day. The president's love of the iconic American fast-food chain is reportedly motivated at least in part by a fear of being poisoned. That's just one quirk in a highly quirky diet.

Sometimes Trump goes for stretches of up to 16 hours without eating. He prefers his steak "so well done" that "it would rock on the plate." He eats two common finger foods — fried chicken and pizza — with a fork. He is rumored to think Ore-Ida fries are "perfect." And you better believe that he gets two scoops of ice cream for dessert, while dinner guests get just one.

What do the president's eating habits say about his mental state? Dr. Bandy Lee, the renowned Yale forensic psychiatrist and author of the New York Times bestseller "The Dangerous Case of Donald Trump," says that the president's diet is "as unsuitable as can be for either maintaining his own immediate or long-term health or being an example to those who look to the presidency for guidance."

Salon talked to Lee about how nutrition choices like Trump's can impact both the brain and mental health.

It has been reported numerous times that Trump has a recurring fear of being poisoned, which is one reason why he consumes an excessive amount of fast food. This predates Trump's move to the White House, yet the president also reportedly distrusts the staff preparing his food at 1600 Pennsylvania Avenue. What does this ever-present fear tell us about his psyche?

You are correct to ask the broader question. The ongoing fear of being poisoned would be indicative of a more general paranoid tendency he has, which is why he has to ask for loyalty from all and to practice nepotism rather than hire competent help — or not to hire at all. He also believes there is a "deep state" on a "witch hunt" against him. Paranoia can be a measure of severity of mental compromise.

Trump is a self-admitted germaphobe, so he reportedly eats only pre-packaged snacks like chips and Oreos on flights; he has also commented on the cleanliness of fast-food restaurants as a draw. What do these intense fears of germs indicate?

I would conjecture that his affinity for fast-food restaurants goes beyond mere cleanliness concerns. For someone with a generally unhealthful lifestyle, his choice of fast food — especially in this day of food consciousness — is rather another example of the self-destructiveness that is characteristic of disease. He could pursue cleanliness without opting for processed, non-fresh foods, but even more greatly endangering his health is the route he chooses.

Trump's McDonald's order includes 2,400 calories and 3,400 milligrams of sodium. He is known to wash that down with large quantities of diet soda — up to 12 cans a day. How does this diet, which consists of copious amounts of artificial sweeteners, and red and processed meats, impact both his current and long-term mental health? Would he see a positive impact if he switched to the balanced diet advocated for by former first lady Michelle Obama in her "Let's Move" campaign?

He is consuming some of the worst-quality foods, which will have an effect on his brain health, as well as mental health. The brain is highly sensitive to the quality of foods that it intakes, since it consumes a lot of energy and is dependent on having abundant vitamins, minerals and antioxidants in its fuel. Processed or refined foods create a lot of free radicals or "waste" which cause oxidative stress, inflammation and harm to the brain.

Not only will there be generally impaired brain function and brain health, but there is an immediate worsening of mood disorders, such as depression and angry outbursts. Research suggests that much of this damage can be reversed and improvement is possible if one switched to a more balanced diet; without switching, however, the damage only accumulates.

At least one instance has been documented where Trump as president was served more food than his guests — for example, an extra dish of sauce to go with his chicken and two scoops of ice cream instead of one. What does his choice to short his dining guests say about him?

There is the narcissistic need for special and exclusive treatment that distinguishes himself from the others, but food in particular is psychologically related to a lack of love. In other words, not having received enough love at a critical, infantile stage often gives rise to a fixation on food and an inability to get enough of it. His shortchanging his guests may also indicate an antisocial need to be cruel to others — or at least to cheat them in order to establish his sense of power.

Trump served the Clemson football team a buffet of fast food at the White House. He blamed the government shutdown, but critics decried the menu as racist and classist. A majority of the team's black players skipped the meal. What is your reaction?

It is a plausible suggestion, as his disdain for minority players is well-known, and he may not have felt obligated to offer better choices. The same disdain could induce him to use the event to seem as if he were down-to-earth and a "people's person," when in fact he merely shares self-defeating habits despite his privilege and ability to do otherwise.

In spite of his well-documented unhealthy diet, Trump has hired medical professionals who claim that he is both the healthiest president ever elected but also as healthy as most professional athletes and just under the marker for what is considered obese. What does the public perception the president pushes about his health, which does not appear to match reality, say about him?

Hiring medical professionals and bullying them into stating that his health is in top shape, is very consistent with his general approach. Rather than do the work to achieve actual improvement, he would rather manipulate impressions and threaten those who refuse to do so, be it in medical, news or work-related reporting.

Is the president's diet suitable enough to nourish the mental health of the leader of the free world? Nutrition aside, does the president exhibit any signs of problems with his mental healths? If so, does this present a clear and present danger?

His diet is as unsuitable as can be for either maintaining his own immediate or long-term health or being an example to those who look to the presidency for guidance. Apart from nutrition, he exhibits numerous signs of mental health problems. Medical students now tell me they "learn the DSM [the Diagnostic and Statistical Manual]" through him, as he presents with numerous symptoms of multiple categories. I have avoided diagnosing partly because it can mislead by underestimating the level of his problems: narrowing on one or two diagnoses risks belying the probability that he meets the criteria of at least a dozen, ranging from multiple personality disorders to mood disorders to cognitive impairments.

What is important, as you state, is whether the president exhibits mental capacity (to discharge the duties of office) and poses a danger to society. We were able to conclude from the copious, high-quality reports by his close work associates in the Mueller report that he lacks basic mental capacity. This alone is dangerous in a powerful position, but he also exhibits independent signs of dangerousness because of being violence-prone. And this combination indeed represents clear and present — extreme — danger.