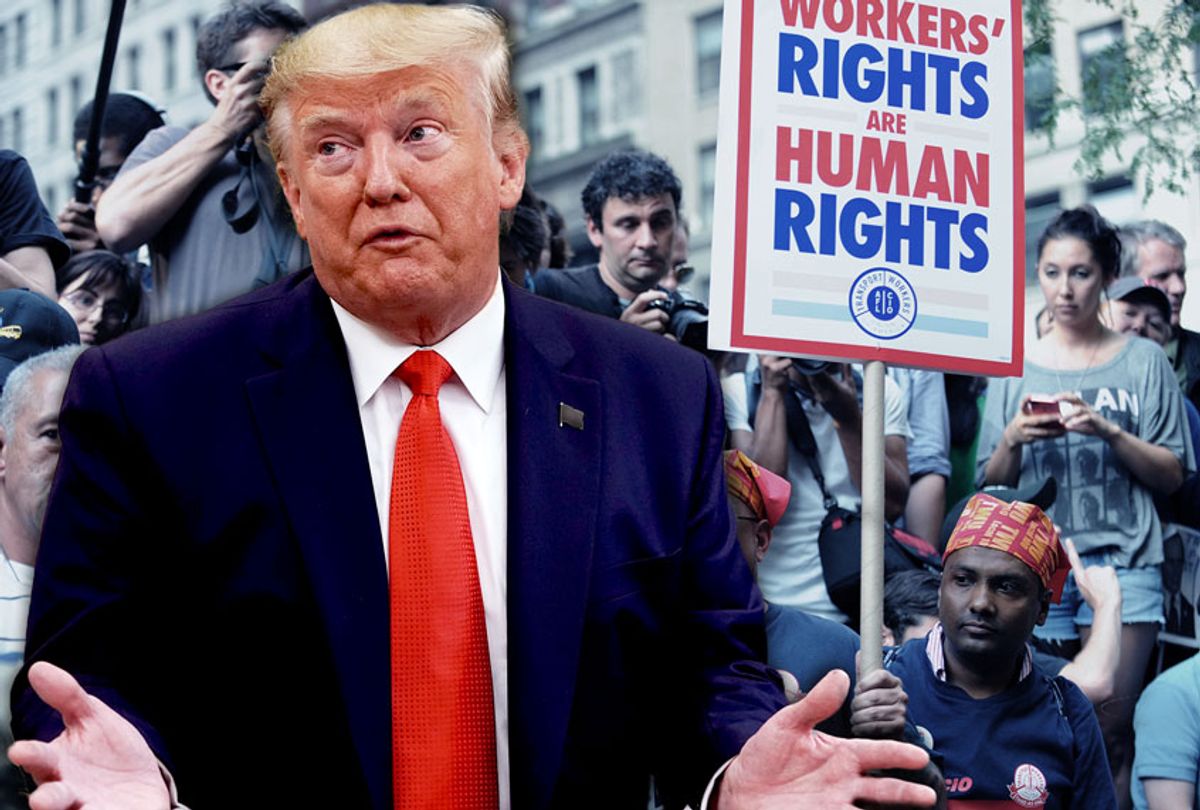 As the national press corps fixates on the coming and goings of President Trump as if it were the only story, the American labor movement is rising up, informed by almost a half-century of wage suppression made possible by unchecked corporate greed that’s turned our economy into a pyramid scheme where all the wealth drifts to the top.

For a generation after Ronald Reagan fired the nation’s striking air traffic controllers, unions were intimidated from striking. Those days are gone. With our politics so consumed with the blood sport of partisan self-preservation, the actual conditions in the country continue to decline. Hence, it is falling to organized labor to be last backstop against abject societal decline.

It has been decades since there been such tumult on the labor front with teachers going on strike in Oklahoma, Arizona, Los Angles and Denver. Last month United Automobile Workers (UAW) ended a 40-day walkout against General Motors. And last year, there were more strikes than there had been in 33 years.

Last week, 8,000 members of the Transport Workers Union Local 100 turned out in front of the Metropolitan Transportation Agency Headquarters in lower Manhattan chanting “a people united, will never be divided.”

In 18 months, working around the clock in a dangerous underground environment, they restored a subway system that the politicians had neglected for a generation and let fall into a decrepit state of disrepair. Yet, even as the system was showing signs of a rebound, with increased on-time performance, management wanted a long list of concessions.

Management was looking to the workers to help close a budget gap that’s the result of the legacy of the agency’s poor management, which has resulted in so much debt that one out of every five dollars generated by the system goes to pay debt service to bond holders for past borrowing.

Whether it be a red state like West Virginia, where teachers in a right to work state successfully won a strike, or in Chicago where teachers went out for 11 days, union members are now willing to put something at risk not only to advance their own circumstance — but that of their communities that for too long have been neglected by the political system.

While the corporate news media likes to zero in on the fight over wages, consider that the Chicago teachers were also going to bat for smaller class sizes, more nurses, social workers and librarians. They know that in our winner take all society their students, over three-quarters of whom are from economically struggling families, need a lot more support than they have been getting.

Since the 1970s, while productivity increased, wages declined or stagnated as earning power was replaced by household and consumer debt. The percentage of Americans in a union declined. While workers increasingly struggled to make ends meet, corporations preceded to grow larger and larger, thanks to a U.S. tax code that subsidized them shifting their operations abroad and then enabled them to hide their profits in places like the Cayman Islands.

Members of Congress, from both political parties looked the other way, were rewarded with hundreds of millions in campaign cash and often found went to work to lobby for the very same commercial interests that underwrote their campaigns.

Almost 20 years into the 21st century we are a country where the average life expectancy has declined for three years in a row, where the severely mentally ill are left to wander the streets or sit in our public libraries, while  an estimated 1 in 9 Americans  are food insecure, roughly over 37 million Americans, including more than 11 million children.

In New York City, which fancies itself as progressive, for the fourth year in a row more than 100,000 children, one in ten, are either living in a homeless shelter or doubled up in temporary housing. According to the New York State Department of Education 34,000 kids life in shelters while 73,740 live in doubled up in makeshift arrangements.

It was this kind of steady deterioration of our national circumstance that Trump exploited in 2016. In the years since his election wealth concentration has continued and the income gap has grown wider.

So, it has fallen to labor to punch above its weight on behalf of the American people who have been cut adrift by a political system captive to corporate interests.