Calm down, everybody. The "John Wick" star isn't brave for dating someone who is *gasp* nine years younger 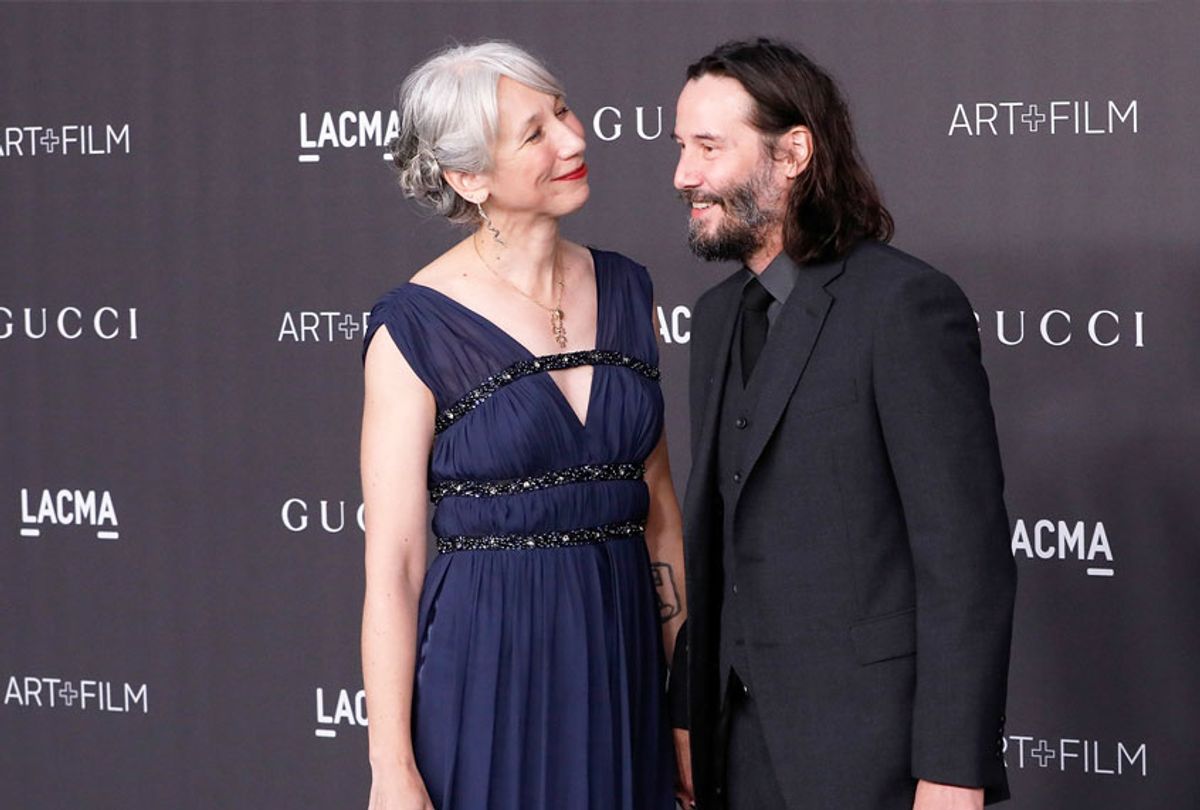 When, on Tuesday morning, Keanu Reeves’s name began turning up in various news feeds, fans swiftly went from assuming the worst (i.e. he died or had been implicated in a scandal) to breathing a collective sigh that the star was making headlines for reportedly having a girlfriend. But oh no, not just any girlfriend. A middle-aged, gray haired, non model-actress girlfriend. It was the kind of revelation that breaks the internet.

That Keanu is an exalted, possibly immortal being for whom we all want nothing but good things is a simple fact. The actor is an iconic blockbuster star, a quirky one-man meme factory and, by all accounts, an actual gracious, decent human being. He’s also suffered unbearable pain in his personal life. His daughter Ava was stillborn in 1999, and his partner Jennifer Syme died in a car accident just eight months later. In a 2006 “Parade” interview, Reeves said, “Grief changes shape, but it never ends . . . When the people you love are gone, you’re alone.” Just this past spring, he made a candid admission — and set off a legion of willing volunteers — when an interviewer in the Asian press inquired about his feelings on love. “You mean romantic love?” he asked. “You know, I’m the lonely guy. I don’t have anyone in my life. But if it does occur, I would respect and love the other person; hopefully, it’ll happen for me.” (Although this interview was later debunked as a fabrication, the image of Lonely Keanu has persisted.)

And happen it apparently it did for him, when Reeves showed up at the Los Angeles County Museum of Art Art + Film Gala holding hands with artist Alexandra Grant. The two have known each other and worked together for several years — they collaborated on the books “Ode to Happiness” and in “Shadows,” and in 2017 cofounded (with designer Jessica Fleischmann) the small art press X Artists Books. On the red carpet, the two looked relaxed and happy, him in a suit and hiking boots, her in a navy blue grecian gown and, as Vogue noted, “silver hair.” The two have appeared together at other art and fashion events over the past few months, but there was something about this particular moment that ignited the public imagination. “Keanu Reeves and Alexandra Grant spark relationship rumors,” CNN blasted, while Elle breathlessly reported that “Keanu Reeves And Alexandra Grant Reportedly Have Been Secretly Dating For Months.” And along with the relationship headlines and the likely sincere wishes for America’s boyfriend’s happiness, there were equal measures of joy and shock over the appearance of Reeves’ alleged lady.

On Twitter, New York Times International contributing opinion writer Bina Shah enthused, “It's a miracle: Hollywood actor dates age-appropriately. An artist with a full head of grey hair to boot. Keanu, I could not love you more at this moment.” Writer and legal analyst Imani Gandy similarly expressed good wishes, saying, “I don’t know why I’m so happy Keanu Reeves has a girlfriend (who is age appropriate no less). I don’t know this man personally. But what happened to him sucks and he deserves some happiness.” And while Paper acknowledged “how much of a relief it is to see a woman boldly looking her literal age while holding hands with one of Hollywood's most established leading men,” it ran with the headline, “Keanu Reeves Has an Age-Appropriate Girlfriend.” At 46, Grant, by the way, is nine years younger than Reeves, who is 55. Their age gap is wider than the one between Pete Davidson and his alleged latest flame, 18 year-old model Kaia Gerber.

As Whitney Cummings pointed out on Tuesday  (even while calling Grant "age appropriate"), “The fact that some people are mistaking Keanu Reeves age appropriate girlfriend with Helen Mirren is wild. In Hollywood, if you’re not 24, you might as well be 70.” The idea that a famous man should go younger — much, much younger — is so expected that to see one who’s even within a decade of the star is unusual. The 65-year-old Dennis Quaid is currently engaged to a 26-year-old PhD student. (His son, actor Jack Quaid, is 27.) The 50-year-old Matthew McConaughey’s wife is a 37-year-old model. The 44-year-old Leonardo DiCaprio seem to have found a female age he prefers decades ago and has stuck with it ever since; his current girlfriend is 22 years his junior. Mick Jagger’s most recent girlfriend is 43 years younger. Jason Statham is 20 years older than his famous girlfriend, Rosie Huntington-Whiteley. The current First Lady is an ex-model who is 23 years younger than her husband.

And that’s just in the real world. In the movies, what we’ve come to accept as the norm is even more skewed, with stars like 29-year-old Jennifer Lawrence regularly cast at the go-to wife and mom. Look at Keanu’s own oeuvre in just the past few years — his cinematic love interests have included 34-year-old Ana Ularu, 37-year-old Ali Wong  and 37-year-old Alice Eve. Even his "Destination Wedding" costar Winona Ryder is seven years younger. In “Knock Knock,” the actress who played his wife was 17 years younger, and his sexy tormenters were in their 20s. Is it any wonder that the mere sight of him standing next to a female born before “Bill & Ted’s Excellent Adventure” was released would inspire gasps? And would look decidedly . . . outside the expected?

Keanu is admittedly not created in the image of mortal men. He’s the same age as Boris Johnson, has just a few months on Brett Kavanaugh, and is probably older than your doctor. If you were to read a news article that described a victim as "a 55-year-old grandfather," you would not do a double take. Conversely, were Reeves dating a woman who answered to the name of Jennifer Aniston, Salma Hayek, or Jennifer Lopez, there would probably be fewer rounds of congratulations for his choice of a fellow AARP cardholder.

Yet the reflexive excitement over a 55-year-old guy going out in public with a seemingly unbotoxed, undyed female of any age speaks volumes to our current vision of “appropriate.” It’s kind of like how, a few years ago, Andy Grammer got a Top 10 hit out a song congratulating himself for courageously not cheating on his woman. Good for you, dude, but this isn’t exactly something to throw a parade over, you know? And if two nice people find each other in this world, that’s always great. It's normal, even. But it’s not heroic, not even for John Wick.