Trump was reminded of "all the attacks we’d already suffered as a family, as well as the military’s "sacrifices" 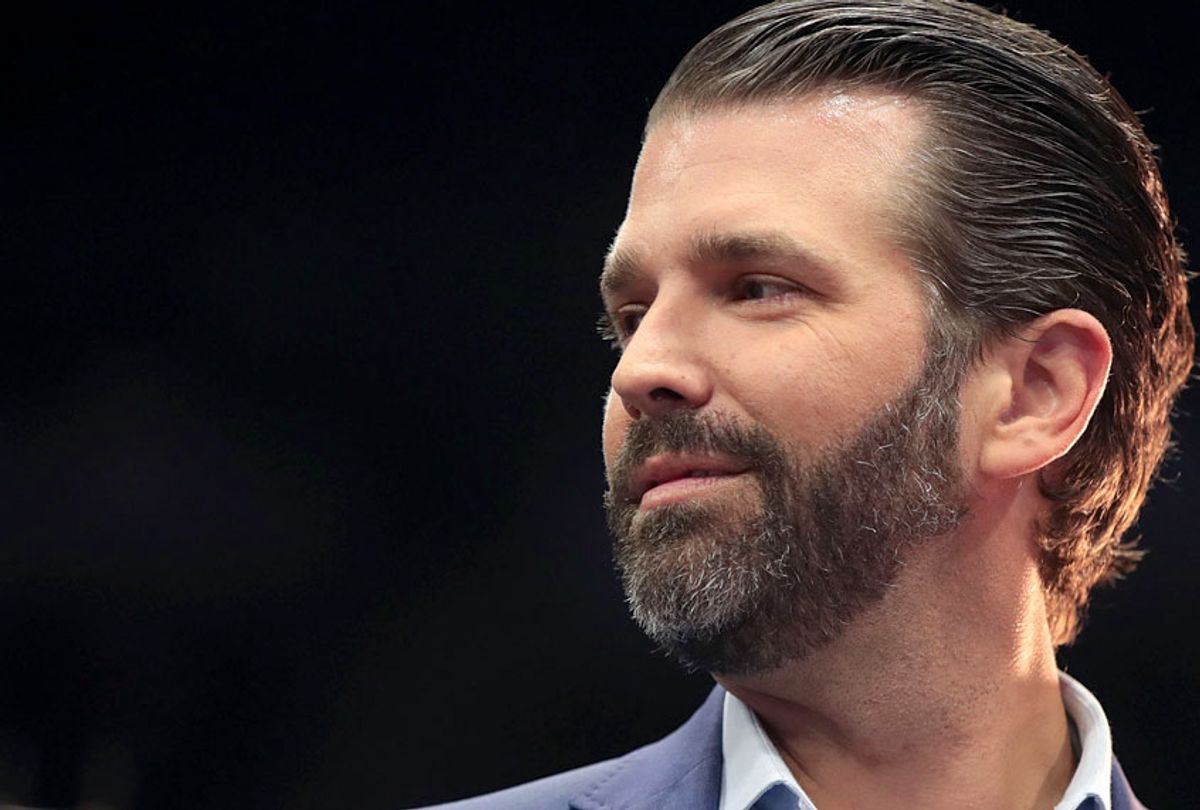 Donald Trump Jr. compared the sacrifices of fallen troops to those his family made to get to the White House in his new book “Triggered.”

Don Jr., the son of a man who allegedly escaped the Vietnam War draft by obtaining a bogus doctor’s note claiming he had bone spurs in his foot, recalled the day before his father’s inauguration when President-elect Donald Trump brought his family to lay a wreath on the Tomb of the Unknowns at Arlington National Cemetery in a passage highlighted bythe Washington Post.

“I rarely get emotional, if ever. I guess you'd call me hyper-rational, stoic,” Don Jr. wrote. “Yet, as we drove past the rows of white grave markers, in the gravity of the moment, I had a deep sense of the importance of the presidency and a love of our country.”

Standing there surrounded by the graves of more than 400,000 troops and their families, Don Jr. wrote, he could not help but think of his own families “sacrifices.”

“In that moment, I also thought of all the attacks we’d already suffered as a family and about all the sacrifices we’d have to make to help my father succeed — voluntarily giving up a huge chunk of our business and all international deals to avoid the appearance that we were ‘profiting off the office,’” he wrote.

"Frankly, it was a big sacrifice, costing us millions and millions of dollars annually . . . Of course, we didn't get any credit whatsoever from the mainstream media, which now does not surprise me at all,” he added.

Don Jr. did not mention that his father broke with decades of precedent by retaining ownership of his company and continuing to profit from international business ventures. Don Jr.’s sense of victimhood was also an ironic twist in a book — that is effectively cashes in on his newfound relevance — in which he writes that a “victimhood complex has taken root in the American left.” His father later plugged the book on Twitter, benefiting his son even further by reaching the president’s 66 million followers.

Much of the book finds the son of the most powerful man in the world complaining that his family is the victim of unfair attacks.

In one passage, Don Jr. refutes critics who have called his father “racist” by pointing out that Trump allowed him and Eric to play with Michael Jackson as children and let him go on vacation with former NFL star Herschel Walker.

Considering "all the things my father has been called, particularly a 'racist,' it sure sounds odd that he’d let his son vacation with a black man or hang out with Michael Jackson, doesn’t it?" he wrote. “If he’s a racist, he’s sure not very good at it.”

"Even now there are forces deep inside our government trying to bury evidence of wrongdoing against my father,” he wrote. “If those people have a hand in writing the history of the Russia hoax — and believe me, they will try — they will say that the Mueller investigation was based on real evidence and that Donald Trump and his administration really did commit obstruction of justice.”

The Mueller investigation extensively detailed numerous instances of possible onstruction of justice by the president.

“If you don't think something like that could ever happen, consider this: it's happened before — to, of all people, Martin Luther King Jr,” Don Jr. wrote. "J. Edgar Hoover and the FBI kept a file on Dr. King for years. After living through the past three years, can you honestly say that anything has really changed? Or is it more of the same?"

Don Jr.’s comments comparing his family’s “sacrifices” to those of fallen soldiers did not sit well with Rep. Ruben Gallego, D-Ariz., who is an Iraq War veteran.

"Eight men I served with are buried in Section 60 of Arlington. I visit them monthly," he tweeted. "Even if Donald JR. lived a 1,000 years he will never even get close to being as good and honorable as they were. Sacrifice is only a word to the Trumps."